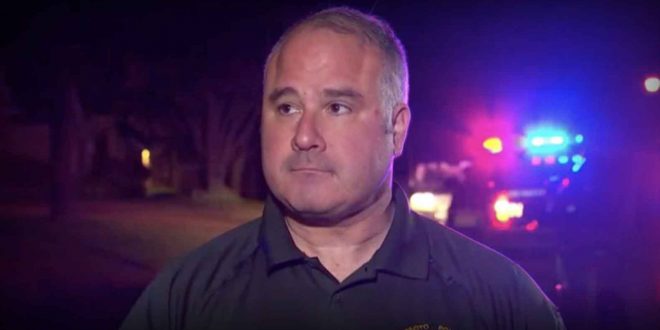 DeSoto, TX — It has been just over a year since Dallas police officer Amber Guyger walked into Botham Jean’s apartment and murdered him as he ate a bowl of ice cream. For this crime, Amber Guyger was sentenced to 10 years in prison. Then, earlier this month just down the road in Fort Worth, officer Aaron Dean, responding to a call about an open door, took aim from outside Atatiana Jefferson’s window, and murdered her. He has since been arrested for this crime. Now, insanely enough, another Dallas cop has shot an innocent person — his own son.

Saturday night, police dispatchers in DeSoto, a city just south of Dallas, received a 911 call from a man reporting a shooting at his home. That man was a Dallas police officer who has yet to be named and the victim was his son. According to the officer, he mistook his son for an intruder and shot him.

To be clear, it was not 2 a.m. when everyone was sleeping. According to police, it was just 6 p.m. when the call came in, meaning that the shooting took place before the sun even set. How, exactly, a police officer could mistake his own son for a criminal — in broad daylight — and shoot him, is a mystery to all.

Nevertheless, no arrests have been made. Police have only stated that an investigation is ongoing.

Luckily for the officer’s son, his dad is a bad shot so he will live. The other recent innocent victims of Texas cops cannot say the same.

According to KTVT, when officers arrived on scene, they found the victim bleeding from his right forearm. The victim was taken to a hospital with non-life-threatening injuries, the release said.

“It was a startling situation, it was an accident,” Pete Schulte, DeSoto police spokesman, told CNN affiliate KTVT-TV. “And fortunately, we’re very happy that it did not result in serious bodily injury or death.”

The identities of the officer and his son are not being released until details are confirmed, the release said.

“The DeSoto Police Department has treated this like every other case that we would have had and we would’ve handled it the exact same way that if any charges are appropriate later on, they’ll be forwarded over to the DA’s office for them to make a decision,” Schulte said.

Three innocent people have been shot or killed by police within a 50 mile radius in just over a year with two of the shootings happening in just the last two weeks. When cops are allegedly mistaking their own son in broad daylight as an intruder and shooting them, we have a problem. When cops are killing innocent women because they are so scared of their own shadow they shoot first and ask questions later, we have a problem.

How many more innocent people have to die before we realize this? This is a problem unique to this country as American cops are by far the deadliest cops on the planet.

In all of 2011, British police killed 2 people. In 2012, 1 person. In 2013, a total of 3 bullets left the barrels of British police guns, and no one was killed. In the following years, a total of 4 people have lost their lives because of British cops, bringing the total number of citizens killed in the UK to 7 in the last 5 years.

On average, police in America kill at a rate 70 times that of its Western neighbors. In just the month of December 2018, American cops killed more people than the entire country of England killed in the last five years.

But if we zoom out just a little further, those numbers become even more shocking. Since 1990, police officers in the United Kingdom have killed exactly 61 people.

Last December, police in America killed 71 citizens — It took English cops 25 years to do what American cops did in just the last three weeks of December.

On average, British police kill around two citizens a year. American cops kill more than that every day.

Of course, all those killed were not innocent, but many were unarmed, shot while running away, and their deaths recorded on video. One thing is certain, however, and it’s that all of them deserved due process.

Some will say that since the US is much larger in population than the UK, that is why American cops kill more. But this is a farce.

To expose this farce, we can compare the US with communist China.

China, whose population is 4 and 1/2 times the size of the United States, recorded 12 killings by law enforcement officers in 2014.

So why are police in the US so much more likely to kill than all of these other first world countries?

We will not pretend that cops in the US kill 70 times more people than other first world countries for one simple reason. However, part of the multifaceted situation which has led to the trigger-happiness of American cops is their training.

This excessive violence has gotten so bad that American police chiefs started getting sent to Scottland in 2016 to learn steps to change this deadly paradigm. A former hostage negotiator with the Boston police department, Chuck Wexler brought a team of cops across the pond in 2016 in a last stitch effort to curb killer cops and his story was documented by Sky News.

According to Sky News:

As the two sets of police officers met, Mr Wexler described how if confronted by a suspect holding a rock an American officer would pull out his gun.

“You’re going to kill someone for throwing a rock. That’s what you’re gonna do,” said Mr Wexler.

“How would society over here think about you shooting someone with a rock? They would not accept it.”

The senior American officers, from forces such as the NYPD and LAPD, watched demonstrations at Police Scotland training centres.

Sky News cameras joined them as they went out on patrol in Glasgow, and watched as unarmed police dealt with a variety of potentially violent situations.

What the report showed is that cops in Scotland know how to avoid confrontation. Instead of immediately resorting to deadly violence, the Scottish cop will step back, use protective shields, or move behind a car for protection.

What the report also found is that American police have a knack for verbally escalating situations too.

“The American style of policing, it’s very authoritative,” he said.

“There’s a difference of going in, straight up at this level, whereby you’re ordering people, you’re shouting at them. You can’t go anywhere after that.

“But if you start down low you can adjust your communications to suit.”

Basically, what this experience showed us is that American police are aggressive both verbally and physically — and it’s deadly.

“It’s about time that we step up and this is our chance,” said Mr Wexler. “It’s a crisis but it’s also our chance to do the right thing.”

Sadly, however, this training has had little effect on the rest of American cops and now police can claim unarmed 16-year-old boys, running away from them, make them “fear for their lives.” These cops can now kill those boys on video and face no consequences. This is the state of law enforcement in the land of the free. Boys are executed as they run away and cops fearing their own sons and shooting them.