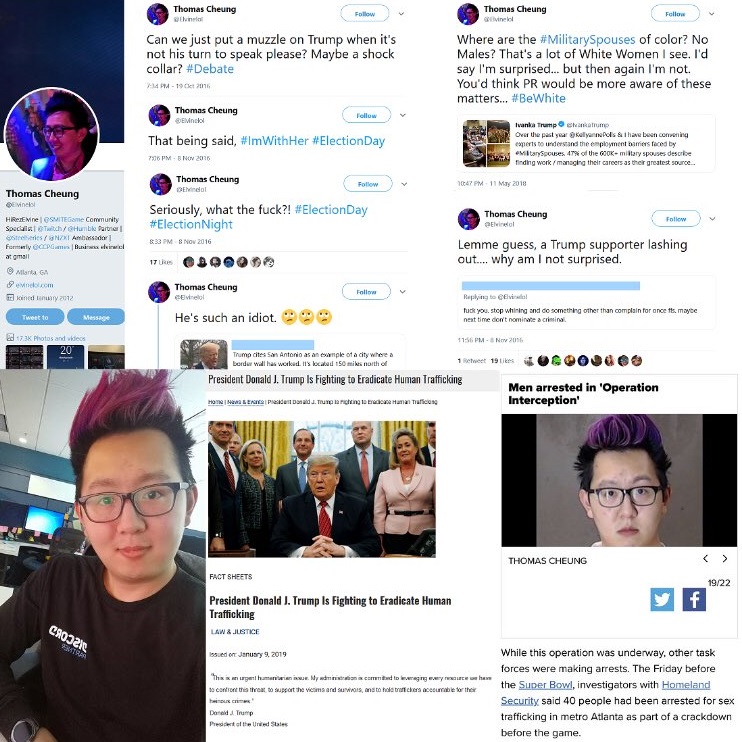 The loudest anti-Trumpers have foul deeds to conceal that must not see the light of day.

Note: Twitch.tv is a live streaming video platform owned by Twitch Interactive, a subsidiary of Amazon. Hi-Rez Studios is a privately-held video game developer based in Alpharetta, Georgia.

“Can we just put a muzzle on Trump when it’s not his turn to speak please? Maybe a shock collar?”

“Absolutely disgusted with our country/government.” — on Supreme Court’s Jan. 22, 2019 ruling to allow Trump administration to bar transgenders from the military. (Arhived here)

“This is disgusting! Absolutely no respect.” — on the (fake) story of the Covington Catholic school boys.

Variety reports that on January 31, 2019, Hi-Rez Studios community manager and Twitch Partner Thomas Cheung was arrested during a Super Bowl sex trafficking sting near Atlanta that targeted men traveling to the area to have sex with a child, according to the Georgia Bureau of Investigations.

Cheung was arrested and charged with using a computer service to seduce, solicit, lure or entice a child to commit an illegal act, according to Dekalb County Jail records. Additional charges may be forthcoming.

“Operation Interception” was centered in Brookhaven, Georgia and took place over several months. Most of those arrested, men ranging in age from 20 to 55, traveled from other areas to Brookhaven to meet with a child to have sex. Those arrested were charged with Computer or Electronic Pornography and Child Exploitation Prevention Act of 2007 and/or Trafficking of Persons for Labor or Sexual Servitude.

During Operation Intercept, the ICAC task force went undercover online using sites that the sex industry advertises in. Over the course of the sting, some of those arrested had sexually explicit conversations with people they believed to be a child and most of those arrested traveled to meet a child for sex. Investigators had close to 200 exchanges with subjects on various social media or internet platforms. Many of those were exchanges in which the subject initiated contact and even after discovering they were conversing with a minor, directed the conversation towards sex. In some of those cases, the subject introduced obscene or lude content, often exposing the minor — who was actually a law enforcement officer — to pornography or requesting the child take nude or pornographic images for them.