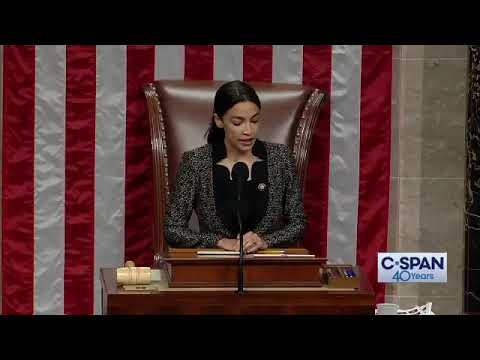 To demonstrate just how illiterate some in Congress are, Speaker of the House Nancy Pelosi (D-CA) had freshman Rep. Alexandria Ocasio-Cortez (D-NY) fill in for her on Friday, making her the youngest woman to do so.

AOC presided over “special orders,” which are mostly short speeches by representatives at the end of the legislative day.

Interestingly enough, AOC had to read from what apparently was a script handed to her as she had to introduce conservative Rep. Louis Gohmert (R-TX).

“Under the speaker’s announced policy of Jan. 3, 2019 the gentleman from Texas, is recognized for 60 minutes as the designee for the minority leader,” she said, after looking around to see if she was doing things right.

Of course, she did make it all about her.

“That was my first time presiding. And it’s exciting. It’s certainly a view. I wish we could, I wish we were allowed to take photos,” she told reporters after the session.

To be fair, I would think it would be exciting. I’m not mocking that at all. It should be a place of privilege and honor, but considering this woman freaks out over her garbage disposal and is amazed that plants actually grow out of the dirt and can barely hold a thought off script, it seemed a disgrace and terrible choice as a fill-in speaker.

Still, this is only part of the grooming process for her, and while many will continue to joke and make fun of her, something tells me that people did that in the past about a certain usurper of the White House prior to his presidential run and didn’t take him seriously and look where that got us.

AOC is dangerous only in the sense that she is a puppet, and the people who control her behind the scenes are as unAmerican as they come. True Americans need to not take her lightly and learn from their recent past what that can lead towards because they need to understand that the up and coming generation have been taught through the public indoctrination centers to think people like AOC are the greatest thing in the world.