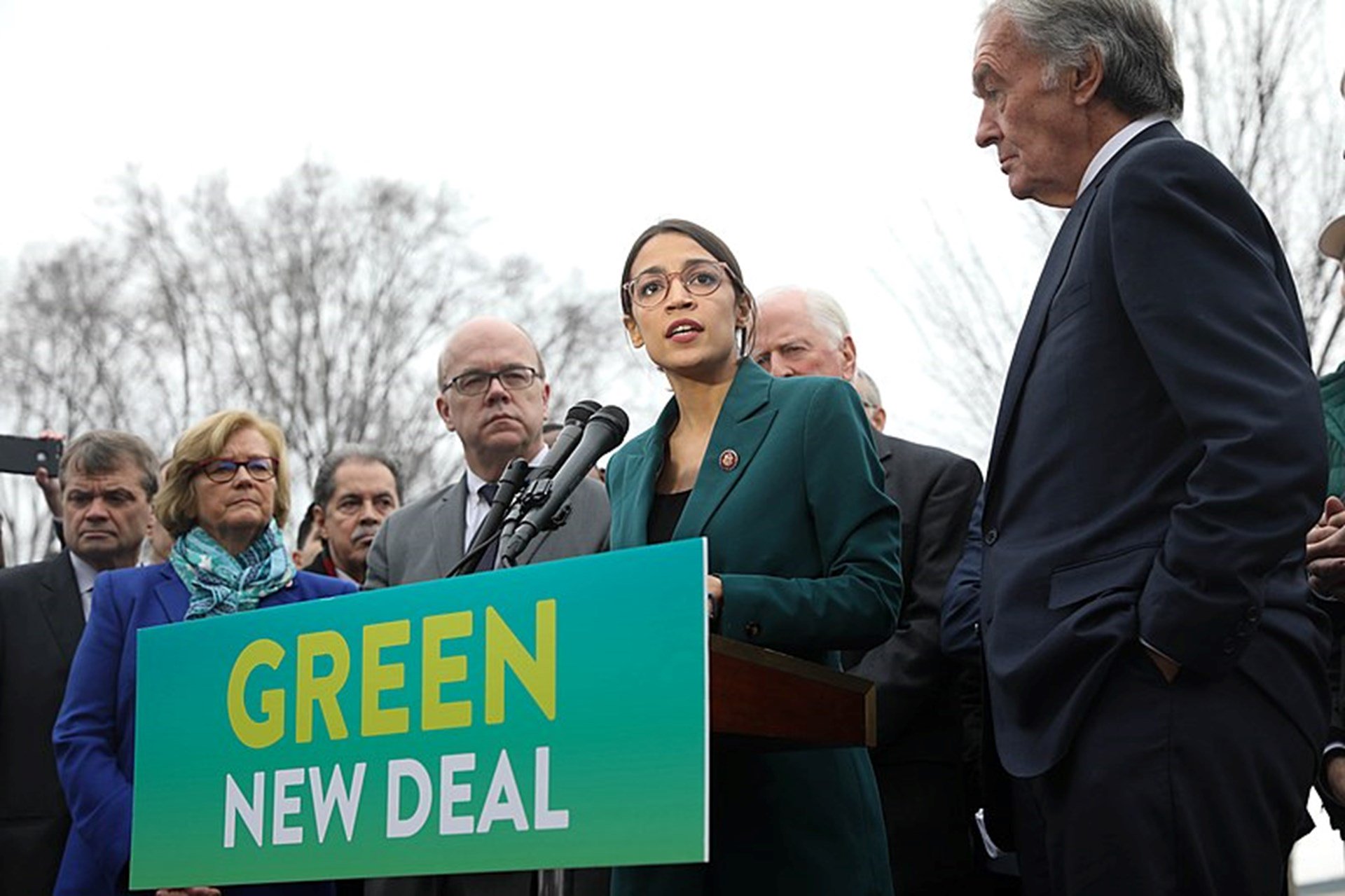 In what its supporters have claimed is “visionary,” congressional media darling Alexandria Occasio-Cortez (AOC) has released her short-awaited Green New Deal, and she has called for nothing short of the destruction of life as we have known it:

Rep. Alexandria Ocasio-Cortez said she has no qualms about acknowledging a so-called “Green New Deal” will mean unprecedented governmental intrusion into the private sector. Appearing on NPR, she was asked if she’s prepared to tell Americans outright that her plans involve “massive government intervention.”

On one level, AOC is being honest; such a plan would be unprecedented, at least in the United States, but it would hardly be the first government-led massive intrusion into a nation’s economy. The 20th century was full of such intervention, beginning with World War I and continuing through the years of communist governments. The century was full of intervention, and the earth was full of the dead bodies to prove it. What AOC and her political allies, including most Democrats that have declared they will run for the U.S. presidency, are demanding is the U.S. version of Mao’s utterly-disastrous Great Leap Forward.

For all of the so-called specifics, the Green New Deal (GND) reads like a socialist website that is full of rhetoric, promises, and statements that assume a bunch of planners sitting around tables can replicate a complex economy that feeds, transports, and houses hundreds of millions of people. The New York Times declares the plan to give “substance to an idea that had been a mostly vague rallying cry for a stimulus package around climate change, but its prospects are uncertain.”

Actually, there is nothing we can call “substance” in this proposal if we mean “substance” to be a realistic understanding that it would be impossible to redirect via central planning nearly every factor of production in the U.S. economy from one set of uses to another, since that is what the proposed legislation actually requires. For example, the following is what AOC and others call the “scope” of the proposed law:

(A) The Plan for a Green New Deal (and the draft legislation) shall be developed with the objective of reaching the following outcomes within the target window of 10 years from the start of execution of the Plan:

It is hard to know where to begin in analyzing such an ambitious plan, especially when one understands the ramifications of what is in this bill. No doubt, many will believe it to be bold and long overdue. The CNN website breathlessly declares:

Public investments should prioritize what the resolution calls “frontline and vulnerable communities,” which include people in rural and de-industrialized areas as well as those that depend on carbon-intensive industries like oil and gas extraction.

And in a move that may draw support from a broad range of advocacy groups, the resolution sweeps in the full range of progressive policy priorities: Providing universal healthcare and affordable housing, ensuring that all jobs have union protections and family-sustaining wages, and keeping the business environment free of monopolistic competition.

However, CNN adds that the specifics—paying for the whole thing—are not included, at least not yet. In addition, the news organization adds the following for those worried that the entire operation might prove to be prohibitively costly:

… the New Dealers argue that a federally funded energy transition would stimulate growth by providing jobs, improving public health, and reducing waste. In addition, they argue that the government could capture more return on investment by retaining equity stakes in the projects they build.

In other words, this whole operation allegedly will generate so much new wealth that it will pay for itself, lift millions from poverty, and transform the entire U.S. economy. The plan is so generous that it promises, according to the Democrat’s press release, that even people who refuse to work will still be provided a “living wage” income.

The plan also is famous not only for what it purports to create (outright utopia) but also what it calls to ban: cows and airlines. The plan calls for phasing out air travel within a decade to be replaced by a network of high-speed rails, as though this were even feasible. Cows, as the released document acknowledges, have flatulence, so they must be totally eliminated from the earth and meat from the U.S. diet, but there is nothing to address the massive disruption to life as we know it in order to implement such a plan.

Not surprisingly, The Atlantic is nearly breathless with praise for this monstrosity, but even that publication admits that the scale of AOC’s “vision” is beyond anything we have ever seen before:

Yet even in broad language, the resolution clearly describes a transformation that would leave virtually no sector of the economy untouched. A Green New Deal would direct new solar farms to bloom in the desert, new high-speed rail lines to crisscross the Plains, and squadrons of construction workers to insulate and weatherize buildings from Florida to Alaska. It would guarantee every American a job that pays a “family-sustaining wage,” codify paid family leave, and strengthen union law nationwide.

To be honest, “untouched” is not the appropriate term here, as “smashed” or “destroyed” is much more accurate and descriptive. We are not speaking of ordinary government intervention that marks most of the U.S. economy but does allow for something of a price system to continue to exist. Instead, something of this magnitude would require a complete government takeover with central planning on a scale so huge that it would have to surpass the grandest dreams of the old Soviet Gosplan.

One of the most-asked questions, of course, is: “How do we pay for this?” Perhaps it is natural to ask such things, but we are not speaking of a particular project for which we have to purchase materials and pay those who create it. Instead, this plan would simply redirect nearly every resource, almost all labor, and every other factor of production away from current uses to something as determined by government planners and overlords. There is no other accurate way to describe what we are seeing.

The resolution naively assumes that all that needs to be done is for government to “finance” these projects through huge increases in taxes, borrowing, and (of course) printing money, and that such infusions of money will enable the government to “pay” for all of these new projects as though one were building a new skyscraper in Manhattan:

Such statements demonstrate a profound ignorance of even basic economic concepts. The authors and supporters of this document believe that all it will take is for the government to direct massive amounts of money toward these new projects, and everything else will fall into line. But that is not even close to reality, as the only way to redirect such massive amounts of money would be to use force, and deadly force at that.

First, and most important, much of the present capital in the USA is geared toward the kind of economy that AOC and the Democrats demand be made illegal, so huge swaths of the capital stock would have to be abandoned, as little of it could be redirected elsewhere. One cannot overestimate the kind of financial damage that would cause, and it would impoverish much of the country almost overnight.

Second, the entire economy would be required to pivot toward capital development that would not be possible, given current technologies and opportunity costs, to create, especially in the 10-year time frame the Democrats are demanding. Diverting new streams of finance toward such projects would be useless and even counterproductive, as the system simply would be overwhelmed. It would not be long before scarcity itself would mean that entire projects either would be stalled (like what we see with the infamous “Bullet Train” in California) or even abandoned. The human cost alone would be staggering.

As pointed out at the beginning of this article, for all of the “grand vision” rhetoric that accompanies the rollout of the AOC plan, this is nothing less than an attempt to re-implement Mao’s Great Leap Forward, albeit with high-speed rails instead of backyard steel mills. One cannot overestimate the disaster that would follow if this were forced upon the American economy.

So-called political visionaries rarely are willing to be truthful about the destruction that follows their schemes. When Baby Boomers were in college a half-century ago, many saw Mao as their political hero, a man with great vision who had the political will to do what was necessary to advance the fortunes of his own people. That he was a murderous tyrant who presided over mass death that exceeded even the killings of World War II was irrelevant or even ignored.

Today, we are told by her adoring press that Alexandria Ocasio-Cortez is the New Visionary, a person who is far-seeing and knows what we have to do in order to survive the coming consequences of climate change. That her grand vision is little more than a mass-depopulation scheme is ignored, and we ignore it at our peril.

This article was reprinted from the Mises Institute.

Dr. William Anderson is Professor of Economics at Frostburg State University. He holds a Ph.D in Ecconomics from, Auburn University, Economics. He is a member of the FEE Faculty Network.