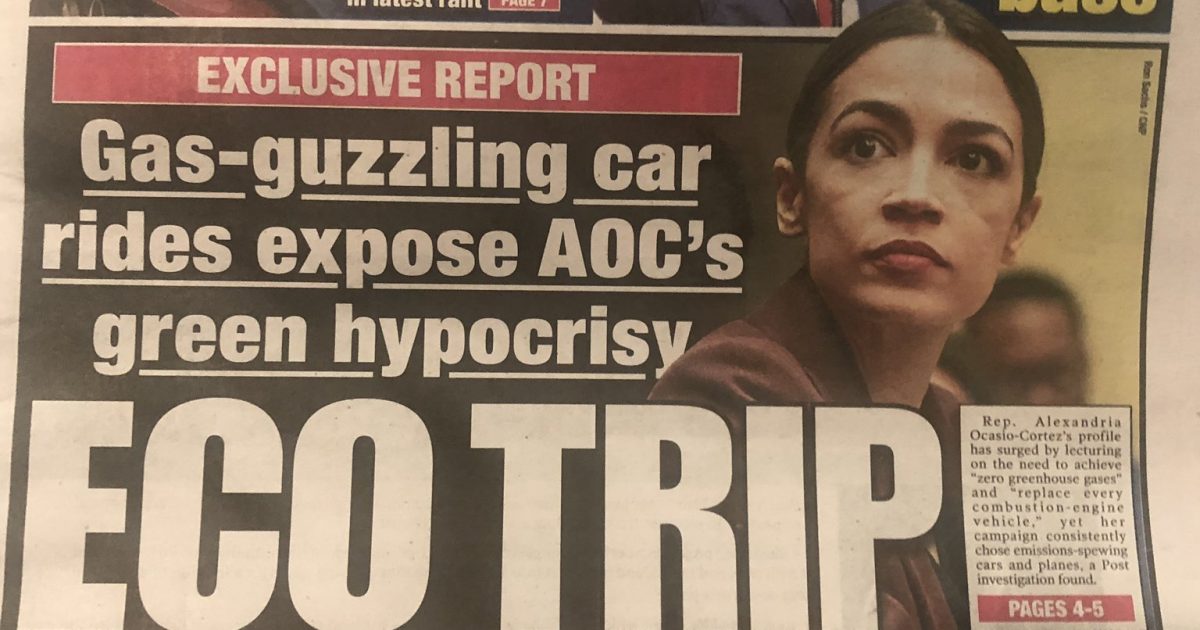 While Communist Rep. Alexandria Ocasio-Cortez advances her ridiculous Green New Deal, the fact of the matter is that she leaves one giant carbon footprint herself, which is evidence of the “Do as I say, not as I do” hypocrisy of people like herself. When she is called out on her hypocrisy, she blasts her critics in a mocking tone.

What’s interesting is how the New York Post exposed the self-proclaimed “boss'”hypocrisy.

In a report by Isabel Vincent and Melissa Klein at the NY Post, the duo claimed:

But the woman who boasts of a “razor-sharp BS detector” seems to have trouble sniffing out her own.

Since declaring her candidacy in May 2017, Ocasio-Cortez’s campaign heavily relied on those combustion-engine cars — even though a subway station was just 138 feet from her Elmhurst campaign office.

She listed 1,049 transactions for Uber, Lyft, Juno and other car services, federal filings show. The campaign had 505 Uber expenses alone.

In all, Ocasio-Cortez spent $29,365.70 on those emissions-spewing vehicles, along with car and van rentals — even though her Queens HQ was a one-minute walk to the 7 train.

By comparison, fellow freshman Rep. Max Rose — whose district is more than twice the size of AOC’s and, like hers, spans two boroughs — listed only 329 transactions for car services, totaling $6,091.29, campaign filings show.

In a district with limited transit options and a $17 Verrazzano Bridge toll, Rose spent only $732 more than AOC on gas and tolls — an indicator of personal car usage.

That’s not all. It appears she has a thing for flying, which is major carbon footprints.

“I knocked doors until rainwater came through my soles,” she tweeted last June, famously donating her worn-out campaign shoes to the Cornell Costume Institute for an exhibit about women and empowerment.

But Ocasio-Cortez and her staff appear to have done much less walking after she vanquished Crowley in the party’s June 2018 primary.

The Democratic firebrand or her staff took Amtrak far less — only 18 times — despite high-speed rail being the cornerstone of her save-the-world strategy.

Then, there’s her car usage:

On Oct. 12, 2018, the campaign logged 26 car-service transactions, its highest number in a single day, as Ocasio-Cortez shuttled between the Bronx and Queens for “phone banking,” according to social-media posts.

“Canvassing is what that people power is about,” the candidate wrote on Facebook that day, boasting about “actually making contact at someone’s door.”

Those 26 cars produced a lot of carbon dioxide, which heavily contributes to global warming. According to the American Public Transportation Association, “a single person … by eliminating one car and taking public transportation instead of driving, a savings of up to 30 percent of carbon-dioxide emissions can be realized.”

Ironically, the Uber-loving politician took a tough public stand against the conveyance after a New York City taxi driver committed suicide in February 2018.

“Yellow cab drivers are in financial ruin due to the unregulated expansion of Uber,” she tweeted on March 21. “What was a living wage job now pays under minimum.”

Her campaign billed only seven rides in yellow cabs in a year and a half, federal filings show.

And while she is quick to dispense all sorts of planet-saving tips to her constituents and fans, telling a high school assembly in Queens last month that they should “skip disposable razors and switch to safety razors” and “skip meat/dairy for a meal,” she doesn’t always take her own green advice.

Of course, when confronted with her obvious hypocrisy, Ocasio-Cortez claimed that she had to use “present technology” to fight for her Green New Deal.

AOC responded to the Post article, tweeting: “I also fly & use A/C,” adding “Living in the world as it is isn’t an argument against working towards a better future.”

Living in the world as it is isn’t an argument against working towards a better future.

The Green New Deal is about putting a LOT of people to work in developing new technologies, building new infrastructure, and getting us to 100% renewable energy. https://t.co/DZGE1WwLbn

This is the way it always works with Marxists. They never, ever, never, ever lead by example.

On Sunday, she tweeted in another attack against The Post, “The Post put the fact that I get into cars (while proposing a plan to invest in better car technology) on their front page,” adding “Pack it up folks, the Pulitzer’s been decided. No one can rival this kind of hard-hitting journalism.”

Pack it up folks, the Pulitzer’s been decided. No one can rival this kind of hard-hitting journalism https://t.co/007iOcpyz2

Ocasio-Cortez wouldn’t know journalism if it came up and ripped her mask off her Marxist face, which it has. She could easily take a bicycle, couldn’t she? Yep, but that is beneath her.

However, to demonstrate the effects of the journalism of The New York Posts’ report, AOC continued on Monday to try to justify her hypocrisy. She tweeted,

“I need to admit something to you all. Frankly, I don’t know how my environmental reputation can recover.” only to reveal “Today… I wrote in a book… made out of PAPER.”

I need to admit something to you all. Frankly, I don’t know how my environmental reputation can recover.

No, it just means you’re a hypocrite who is out to control the people you claim you represent, along with the rest of America. Next time, try practicing what you preach!