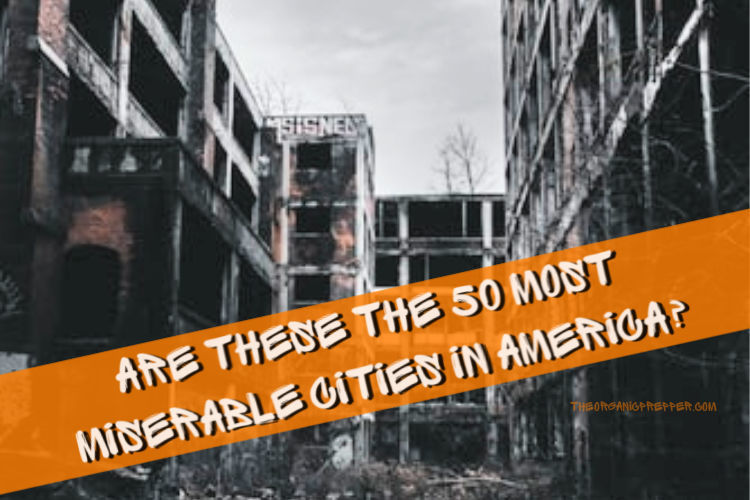 According to a report by Business Insider, the title of the most miserable city in the United States goes to…

BI says that the 50 “most miserable cities” are made so mostly by poverty and a lack of opportunities to pull oneself out of poverty.

Business Insider also took into account the havoc wrought by natural disasters, blight (abandoned houses), crime, and addiction rates. This spreadsheet shows how they arrived at their conclusions using data from the US Census Bureau.

Why is Gary, Indiana so miserable?

Gary used to be a hub of manufacturing, but those jobs have long-since gone elsewhere. When the jobs went away, so did many of the residents. Of the ones who remain, barely 50% are employed and 36% live under the poverty line.

The only positive effect of the struggling population is that when people left, certain crimes left, also.

But Gary isn’t the only place that people can’t get ahead.

If you’ve been paying attention to the homelessness crisis and the fecal matter in the streets, you will probably be unsurprised to hear that California has more miserable cities than any other state, with 10 falling into the 50 most miserable list.

California is followed by New Jersey, with nine miserable cities, and Florida, with six.

The other miserable cities on the list are scattered across the country. Things are so bad in many of these cities that it’s safe to say, the SHTF has quietly arrived and set up camp, while the rest of the country remains relatively oblivious to their plights.

Why makes these cities so “miserable?”

Many of the “most miserable cities” have stories of violence, natural disasters, drug addiction, and crumbling infrastructures. Quite a few have factories that have moved elsewhere, leaving a large swath of the population unemployed and living in poverty. It’s easy to tell people they need to get jobs. But people in these places know that for many, there are no jobs to get. Housing is unaffordable on the local average wages for those who do have jobs.

Foreclosures and repossessions are common themes. A few of the cities are dealing with thousands of immigrants they must try to house and feed. Others have corrupt local governments or governments that have managed finances poorly. Several are far too densely populated.

And here are some things you might not expect in the United States of America. In quite a few cities on the list, clean running water is not a given. Pollution and sanitation are serious issues for thousands of people.

I’ve written before about how a high percentage of Americans have no emergency funds and are struggling to pay for basic necessities like rent, food, and healthcare. The folks in these cities know all too well about that which I’ve written.

Here are the 50 most miserable cities in the United States of America.

These cities are ones that Business Insider has named the 50 “most miserable” according to data collected during the last census.

For details on why each city made the list, go here.

Do you agree with the findings on this list?

The entries on this list are not my personal opinion. As I mentioned earlier, the list above is based on the findings of the Census Bureau, who tracked population declines, the labor force, median incomes, those without health insurance, average commute times, and the percentage of residents living in poverty. Then, these statistics were used by Business Insider to compile the rankings.

Many things contributed to the statistics above, particularly manufacturing jobs leaving and natural disasters. The folks in many of these American cities are facing their own SHTF situations while those of us less an hour away from them are living in comfort, blissfully unaware with our clean running water, good sanitation, and plentiful jobs.

Do you agree with the methodology that determined which cities were the “most miserable?” Are there cities you felt would have been on the list that weren’t? Which ones? Do you feel that any of the cities on the list don’t deserve to be there?