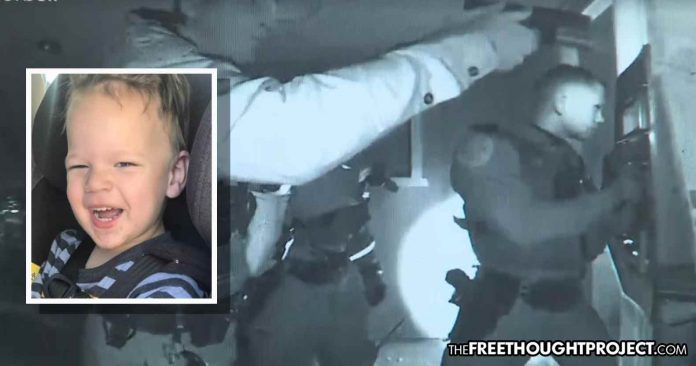 Chandler, AZ — Sarah Beck and Brooks Bryce are speaking out to local media after their children were kidnapped by armed men because they let their 2-year-old son Heber recover from a fever at home—and not in the ER.

The nightmare for this family started 4 days ago when they brought their toddler to the doctor at the Southwest College of Naturopathic Medicine because he had a fever. The fever had gotten pretty high, 105, so the doctor told the family to take the baby to the ER.

When the family got back to the car, however, they took Heber’s temperature once more and noticed that it had dropped significantly. His temp fell to 102, which is no reason to head to the ER.

“He’s acting normal. He’s dancing with his sisters in his car seat. And I take his temperature and it’s 102,” said Beck.

For those who may be unaware, it is not necessary to bring your toddler to the ER for a fever. According to Johns Hopkins medicine, if a toddler has no other symptoms with fevers under 104, you just need to make them comfortable. What’s more, they only recommend seeking medical attention after repeated fevers of 104 or higher—which is what this family did.

Because Heber’s fever was on the decline and he had no other symptoms, the family opted to go home instead of making a trip to the ER. They had no idea what would happen next.

“We love our children, we love them. If our children needed help, we would absolutely help them,” said Beck. “I told the doctor that I’d bring my son back for her to check and make sure that his fever was lower, and she said she wouldn’t see him, and I had to take him in.”

Once the doctor realized they didn’t take their toddler on a seemingly unnecessary trip to the ER, they called the Department of Child Services—who then called the cops.

As AZ Family.com reports, officers went to the family’s home to check the child’s welfare, but no one answered the door, even though police could hear “someone coughing inside one of the bedrooms,” according to the police report.

The family didn’t feel like dealing with police, so they didn’t answer the door—which is their right to do so. This prompted the officers to call Bryce who answered the phone and told them his son was fine.

“Like we’re holding our kids hostage or they’re deathly ill or barely alive. He was perfectly fine. He was in my arms sleeping. As I was on the phone with the officer I took his temperature, it was 100 degrees. There’s no reason to give up my kids because he has a temperature of 100 degrees and sleeping,” said Bryce.

But these cops just knew this family was up to no good so they persisted and eventually kicked in the door and raided the home.

“The decision was made to force entry of the home for DCS in order to take custody of the child,” police said.

Police then proceeded to make it sound like the kids were living in shambles and all being neglected—so they took them all.

Two additional children (aged 4 and 6) were located, and police say they were also suffering “similar symptoms to include vomiting,” according to the police document.

One officer wrote in the police report, “There was clutter everywhere. The house was filled with items everywhere I looked.”

They also claimed that a shotgun was in a bedroom. “A shotgun was lying next to the bed, against the wall, and was not locked or secured,” the report read.

While this may sound bad, according to Bryce, its a complete farce.

“The clutter was laundry on our couch,” said Bryce. And the shotgun “is inert. It does not work.”

As for the kids also being sick, that was true. But there is no crime in having sick kids.

Still, the kids were taken from them by police, who put them in an ambulance. They have not seen them since and have no idea where they are.

Showing just how seemingly fabricated this situation was, the family was not charged with any crime.

“I’m just beside myself. I just want my kids. I just want to know are they OK?” said Beck as she began to cry.

As TFTP has previously reported, children who get taken by the state get put into a system that is rife with abuse. An estimated 18,000 children—every single year—go missing from these “protective care” systems. Thousands of those children are then sold into sex slavery. In fact, as we reported this week, it’s estimated that 88 percent of sex trafficked children come from this system. Hopefully this family gets their kids back before they become a number in these most disturbing statistics.