Rep. Kyrsten Sinema (D-Arizona), 42, is the first openly-bisexual person to be elected to Congress. She is now running to replace RINO Sen. Jeff Flake (R) in the U.S. Senate.

Raised a Mormon, Sinema began her political career as a Green Party activist, but switched to the Democrat Party. After she was elected to the U.S. House of Representatives in November 2012, she shifted toward the political center, crafting an image and record as a “conservative” center-left Democrat, despite the fact that in 2002 in a letter to The Arizona Republic, she trashed capitalism: “Until the average American realizes that capitalism damages her livelihood while augmenting the livelihoods of the wealthy, the Almighty Dollar will continue to rule.” (Source: Wall Street Journal)

According to The New York Times, Sinema has given “contradictory answers about her early life,” describing her childhood as one of great financial hardships, without “running water or electricity,” but the Times found that Sinema’s mother and stepfather made monthly payments on gas, electricity, and phone bills. Asked whether she had embellished details from her childhood, Sinema insisted, “I’ve shared what I remember from my childhood. I know what I lived through.”

The Times also observed that Sinema is running “one of the most moderate-sounding and cautious Senate campaigns this year, keeping the media at arms-length and avoiding controversial issues” and mentions of President Trump. Both Republicans and Democrats have said Sinema has “few major legislative accomplishments to her record” and is running “on a political image that she has shaped and reshaped over the years. And nothing is more central to it now than her childhood homelessness.”

Despite her contrived image as a “conservative” Democrat, Sinema is pro-abortion, with a 100% rating from Planned Parenthood, and committed to “advance” LBGT “rights”.

Writing for The Federalist on October 19, 2018, Bre Payton reminds Arizonans that: 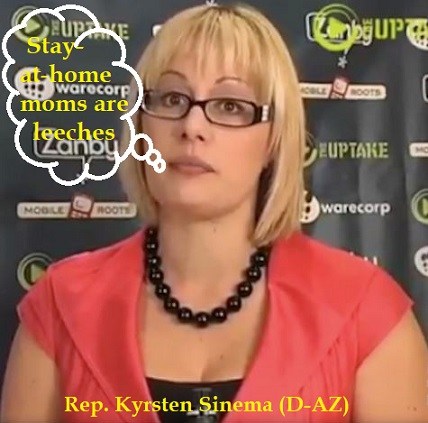 In an email, Brian Burch, President of Catholic Vote, writes:

And this woman wants to represent Arizona in the United States Senate!?

Just imagine what ‘Senator Sinema’ would be like! She represents everything we oppose. She has a 100% pro-abortion voting record and will vote for Planned Parenthood every time. She favors a full government takeover of health care. She opposes religious freedom. And Chuck Schumer will be able to count on her to vote against every single judge Trump nominates…

Imagine if a Republican had called single mothers ‘leeches.’

This is the same crazy politician who referred to her home state of Arizona as the “meth lab of democracy.” And during her anti-war protest days, she depicted U.S. troops as skeletons inflicting “U.S. terror” in Iraq.

The Arizona Senate race is neck-and-neck in the polls. Some believe this race will decide who controls the Senate next.

Like Sinema, Martha McSally, 52, is a Congresswoman in the U.S. House of Representatives. She is a retired military officer who served in the U. S. Air Force from 1988 to 2010, rising to the rank of colonel. One of the highest-ranking female pilots in the history of the Air Force, McSally was the first American woman to fly in combat after the 1991 lifting of the prohibition on female combat pilots.