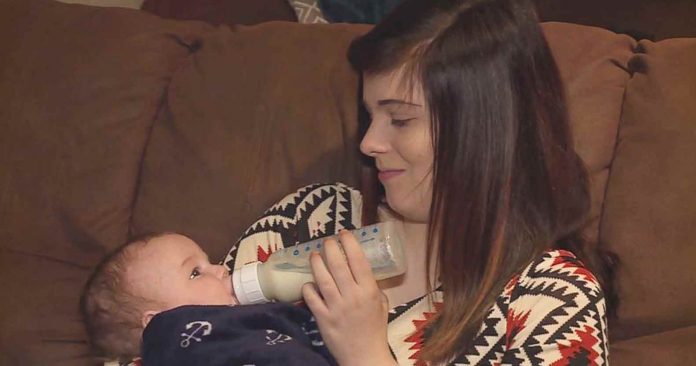 Do convicted felons have the constitutional right to defend themselves with a firearm? The answer to the question, in most U.S. states is a resounding no. Those who do, like Arkansas native Krissy Noble, face years in prison, all for choosing to protect their lives and the lives of their loved ones with a firearm.

Noble was cleared of all wrongdoing in the Dec. 7th shooting death of Dylan Stancoff, who attacked her in her own home. Noble was pregnant at the time of the shooting when Stancoff, calling himself Cameron White, stopped by her home and asked to speak to Noble’s husband who was not home at the time. Saying he was a friend from the military, Stancoff left but returned later, pushed himself into Noble’s home, attempted to cover her mouth to prevent her from screaming, and began to struggle with the mother-to-be.

Noble escaped briefly and retrieved a .40 caliber handgun, fired three shots, and killed her attacker. But because Noble pleaded guilty (before the shooting in 2017) to felony possession of marijuana, she now faces six years in prison, all for the crime of using her husband’s handgun, a gun she successfully used to defend herself and the life of her unborn baby.

The case against Noble will likely be an open and shut one. After all, she pleaded guilty to drug possession and knew she was prevented by law from owning a weapon, a crime which the state takes seriously. The guns belonged to her husband who is not a convicted felon.

However, natural law, the same type upon which the U.S. Constitution was founded, does not discriminate against felons from possessing self-defense weaponry such as a handgun. Felons who still choose to defend themselves and their families from predators often resort to less-than-lethal weapons, black powder firearms (which can be unreliable), or hand-held weapons such as baseball bats, all of which are not as effective as a modern-day firearm.

The War on Drugs and the War on Guns has, yet again, caught another morally innocent victim in its legal dragnet. Drug War advocates would likely contend Noble should have been in jail, not out on a suspended sentence, for being in a car where a plant legal in some form in over half the country was found by police. Noble claims the cannabis did not belong to her but to other occupants in the vehicle (no one claimed the drugs so everyone in the car was charged with the same felony).

War on Guns advocates would likely blame Noble for opening her door to a stranger. Both groups of extremists are relentless in their pursuits to put people in prison for possessing a plant, or for choosing to possess a firearm. And both groups’ positions violate natural law.

Because marijuana remains illegal in the State of Arkansas, countless individuals face long sentences behind bars, all for choosing natural medicine over dangerous pharmaceuticals. Consequently, the felonizing of all Americans is reaching epidemic proportions with nearly 10 percent of the American population behind bars, with many of those imprisoned for cannabis, a substance which is now legal in more than half the United States.

Noble is now fearful the very baby she saved will not know her until his formative years have passed. She remarked her past should have no bearing on her present fight to remain out of prison and lamented the possibility of not being able to raise her son.

He’s not gonna know what happened to his mom…They already knew about my past charges…They were OK with it then, why aren’t they OK with it now?

If Noble is convicted on weapons charges, a young boy will grow up without his mother, a young woman will face the nightmares of prison, and the only people who will benefit will be the lawyers who get paid to prosecute and defend her and the prison industrial complex which financially benefits from mass incarceration. Something has to change. All Americans have the right, under natural law, to defend themselves by any measure they deem necessary.