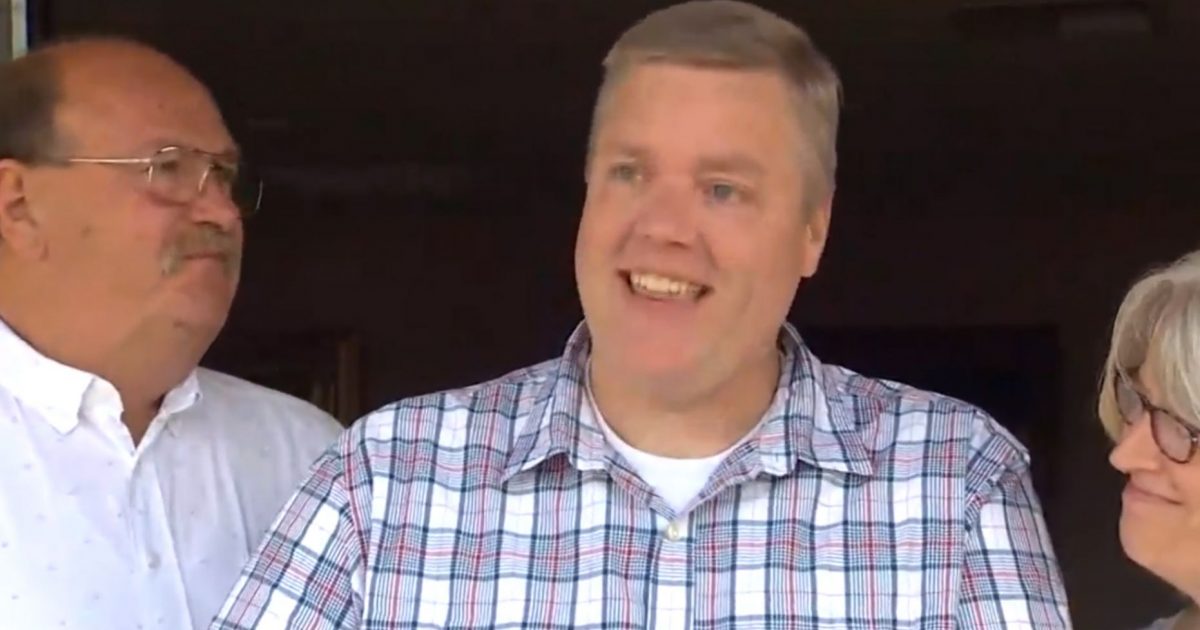 I don’t know this pastor’s theology, but his actions speak louder than his words, a regular Black Robe Regiment

-style pastor, in my opinion. David George from Oakville, Washington, shot and killed a carjacker who had shot two innocent bystanders during his spree at a Washington State Wal-Mart. George has been identified as a 47-year-old pastor.

Back in June, I reported on an armed gunman who shot and killed an armed carjacker, who had already shot two innocent bystanders at a local Walmart in Washington state.

About 5:30pm, calls came into Thurston County 911 that shots were fired at the local Walmart store.

TPD said the suspect, Tim Day, 44, allegedly went into the store, fired a gun at the display case that contained ammunition and fled.

Armed shoppers were put on alert, and at least two of them pursued Day.

“Two shoppers in the store were legally carrying firearms and heard the shots,” police said. “The shoppers observed the suspect with a gun, and followed him to the parking lot.”

Day attempted to carjack another vehicle in the parking lot and when the driver failed to comply, he shot the driver.

“The suspect then approached a second car and driver. When the driver backed away, one of the armed citizens shot the suspect who died at the scene,” police said.

A 47-year-old man shot Day and then proceeded to administer first aid to him before paramedics arrived.

At least one shopper praised the armed citizen as a hero.

We now know the identity of that armed hero: a pastor by the name of David George.

OAKVILLE, Wash. – The man hailed as a hero for halting a gunman’s wild rampage outside the Tumwater Walmart store came forward Wednesday and said he fired his weapon only after it became clear that the gunman might injure or kill more innocent victims if he weren’t stopped.

David George, who is an emergency medical technician with the Oakville Fire Department and a pastor at the Oakville Assembly of God, described his harrowing experience at a Wednesday news conference in his hometown.

He said he initially wanted to remain anonymous, not out of shame or regret, but to maintain the “dignity and integrity” of his ministry in Oakville. But he later reconsidered after being cleared of any wrongdoing in the shooting of the gunman, who had already injured three people in a series of carjackings and a shooting rampage at the Walmart store before George stopped him.

George recounted the events in his own words. Take a look.

“My family and I were at Wal-mart on Sunday afternoon to make an exchange. I was speaking with an employee at the customer service desk while my wife, daughter, and grand-daughter were in a check-out line to purchase additional items.

“I heard shots fired near the back of the store. I am a concealed weapon carrier and permit holder, with significant training in the use of firearms and some of the legalities involved in a defensive encounter. As a volunteer firefighter I have also received active shooter training. In addition, I am also a credentialed range safety officer. I train regularly to be proficient with the firearm I carry and to do so in a safe and responsible manner.

“All that to say, I was sure it was gunshots I heard and I was familiar with how I should respond, while considering mine and the public’s safety in the setting of this large store. I was concerned for my own family and sought to find them and exit the building. My daughter, recognizing gunshots, also gathered her daughter and moved quickly to exit the building.

“I did not see my wife and so I continued to look for her as people began to realize the situation and run out of the building. At no time did I draw my firearm in the building.

“While doing so, the gunman came past me waving and pointing his gun and exited the building. I followed carefully, along with another citizen carrying a firearm, unaware of what the shooter would do next or where he would do it.

“The gunman attempted to get a car and when he failed moved to another screaming at the driver. He then shot two times into the driver’s side of the vehicle. When the driver did not or could not respond to his threats he began to travel in the direction that I thought my family to be.

‘At this point I left cover and moved to intercept the gunman. When the gunman began threatening another person for the use of their car, I moved in order to have a safe shot at the gunman. He entered the vehicle, which I considered an even bigger threat and fired to stop the shooter.

“After being hit, the gunman tried to exit the vehicle and fell to the ground. I moved to clear the gunman yelling to him to drop the gun and show me his hands. I determined the gunman was incapacitated and unable to respond at this time.

“It was then that I heard someone associated with the previous gunshot victim yelling for help that her friend/husband had been shot. I directed the other armed citizen to remain with the gunman and retrieved my jump bag/first aid bag from my nearby vehicle in order to render aid to the previous gunshot victim. I am an EMT with Oakville Fire Dept. and I responded as my duty and training instructed.”

“I acted on Sunday to protect my family and others from the gunman and his display of obvious deadly intent. This is in accordance with both by training as an emergency responder and calling as a pastor, husband, father and grandfather.

“I am grieved that the shooter’s reckless actions endangered and hurt numerous individuals and demanded that he be stopped before doing more harm. My family, my congregation and I are praying for the gunshot victim’s full recovery and for all those that are suffering as a result of Sunday night’s tragic events, including the shooter’s family.”

Clearly, Pastor George is a hero, and people recognized that fact.

“He is a hero. This (suspect) could have taken out more people, wounded or killed,” witness Brian Adams said. “(The suspect) hijacks a car apparently, to get here, then hijacks another car. If this customer hadn’t done what he did…. Yeah, he’s a hero.”

Witness to Tumwater Walmart shooting says bystander that shot and killed suspect is a hero.
Says that man also rendered aid to victim that was shot. @KING5Seattle pic.twitter.com/Jud3YCtV7a

Well done, Pastor George! I hope there’s a lot more pastors in America just like you!