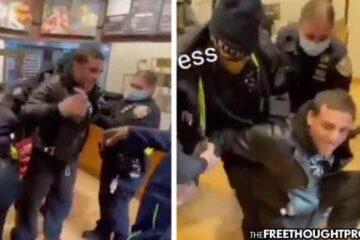 In the land of the free, individuals 18 and older join the military and are told their service protects the freedom of the United States. Their commitment and dedication to the country, we are told, is what keeps us free and prevents America from being taken over by hostile foreign actors who hate our freedom.

A video going viral on Twitter, however, tends to negate that reasoning and if the US military really did “protect our freedom,” they’d be in New York right now preventing police from kidnapping and caging people for trying to eat — including the very people who signed up to “protect” that freedom.

As TFTP reported, earlier this month, New York mayor Bill de Blasio expanded the already-tyrannical “Key to NYC” program which imposed a vaccination mandate for workers and customers at indoor dining, fitness, entertainment and performance venues. Anyone who wished to enter a public place would first be required to give that place a glimpse into their personal medical records by providing proof that they had taken a covid-19 vaccination.

Beginning last week, this discriminatory and unscientific practice was expanded to include children, ages 5-11, who are now also forced to show proof of vaccination to enter public places.

“New York City will not give a single inch in the fight against COVID-19. Vaccination is the way out of this pandemic, and these are bold, first-in-the-nation measures to encourage New Yorkers to keep themselves and their communities safe,” said Mayor Bill de Blasio. “From workplace mandates, to $100 incentives, to mobile and at-home vaccination offerings, no place in the nation has done more to end the COVID era. And if you have not taken this step yet: there’s no better day than today to stand up for your city.”

Apparently, Bill hasn’t been looking at the data and reading the headlines from across the planet showing that places even with 100% vaccination rates are experiencing massive surges in COVID-19.

As Günter Kampf, a prolific researcher at the University of Griefswald in Germany wrote in a recent letter published in The Lancet:

People who are vaccinated have a lower risk of severe disease but are still a relevant part of the pandemic. It is therefore wrong and dangerous to speak of a pandemic of the unvaccinated. Historically, both the USA and Germany have engendered negative experiences by stigmatising parts of the population for their skin colour or religion. I call on high-level officials and scientists to stop the inappropriate stigmatisation of unvaccinated people, who include our patients, colleagues, and other fellow citizens, and to put extra effort into bringing society together.

Nevertheless, those who claim they are “following the science” continue to law waste to individual rights and freedoms. This week, a US Army veteran, who signed up to “protect America’s freedom,” was kidnapped and caged for practicing that very freedom — all thanks to law enforcement carrying out the tyrannical mayor’s orders.

A video uploaded to Twitter by photographer Leeroy Johnson shows cops swarming the Army veteran before bringing him down to his knees, placing him in handcuffs and hauling him off to jail — for ordering food.

“Activists against mandates was just arrested at Panera Bread in Brooklyn NY that’s for the Vaxed only , the Same man was arrested 2 times last week for trying to order food. He’s the army veteran,” wrote Johnson in the Tweet.

According to reports, the man was not staging a protest and was simply trying to order food. Shore News Network reports that the man was ordering food and even though he paid, did not receive his food because he was arrested.

TRENDING: As PETA Calls For Fauci Resignation, He Gets Exposed For A Decade Of Torturing & Killing Dogs

The veteran was reportedly booked into NYPD’s 175th precinct and though he was eventually released, his freedom was taken from him for trying to eat. This is not acceptable.

Sadly this is becoming the norm. Just last week, TFTP reported on multiple similar videos in which people were kidnapped by police and thrown in cages for attempting to buy food without first showing proof that they’ve had a medical procedure.

These are unprecedented times and if we keep allowing this madness to go unchecked by obeying it, we will end up in a dark place. Our freedom is not some arbitrary product controlled by politicians who give it to us in exchange for compliance. Our freedom is inherent and unalienable and anyone who attempts to say otherwise by adding terms and conditions to that freedom — is an enemy to it.

Civil disobedience is our way out of this authoritarian world. When enough good people choose to break bad laws, this behemoth bureaucracy will have no other choice but to move to the side, and then, and only then, does freedom win.