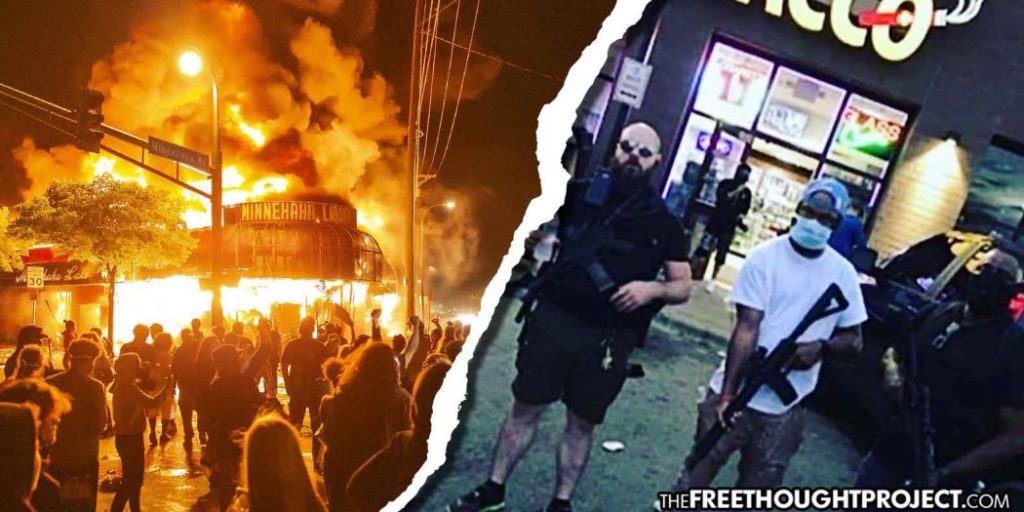 Parts of Minneapolis, New York, Atlanta, Seattle, and others cities from coast to coast are burning. The anger in the US toward the establishment has spilled over into the streets and while much of that anger was devoted toward government property and law enforcement, another unfortunate reality has unfolded.

Looting and rioting have leveled small businesses in Minneapolis and mom and pop shops have seen their life’s work — which was already struggling from the lockdown — burn to the ground. However, there are some folks who are refusing to lay down and let the looting crush their part of the American dream.

Armed to teeth with semi-automatic assault rifles and handguns, multiple gun owners — both black and white — have reportedly been coming together to protect private businesses from looters.

As cops focused on arresting and pepper spraying journalists, thieves and vandals were roaming free, and emptying the shelves of mom and pop shops while laying waste to others. The only deterrent to these bad actors destroying and robbing businesses were good actors — with big guns — who were there to stop them.

Many of the initial armed protectors we saw were divided based on race. Black business owners were protecting black businesses and even putting signs up in their windows that said “black owned,” to deter possibly racially motivated attacks.

What this illustrates is the immense power of the Second Amendment and how important it is when it comes to self-defense. Police cannot and will not be there to protect you and it is up to you to protect your own. Doing so while well armed makes that a far easier task.

ARMED BLACK BUSINESS OWNERS standing up AGAINST Looters/Rioters & their #LiberalCoddlers in the media.

You must SEPARATE yourselves from the "ALL black ppl have the SAME values/mentality" rhetoric of the Progressive Left. YES

While the above video of black gun owners protecting private business is certainly inspiring, as the looting progressed, racial barriers appeared to wither away and we watched black and white gun owners join together for the mutually beneficial arrangement of protecting their private property.

“It’s about damned time some heavily armed rednecks stood with fellow citizens,” the gun toting duo said in the video below. “These guys are out here with machetes and shattered windows trying to keep looters out of their business because cops can’t get in here. And so, you know, I figure, before there were cops there were just Americans … so, here we are.”

“Justice for Floyd, and I hope they stop looting at some point,” the men, who are both white said.

These guys say they support the protests but not the looting. Showed up to help this tobacco store owner stop people from breaking in pic.twitter.com/x2FMQiQwVK

While there are certainly plenty of things to be upset about with the current situation going on, there are several reasons to take hope from these acts of bravery that are shattering racial barriers. It is also why the mainstream news won’t report it.

This story should be on news media outlets across the country, but unfortunately it won’t be, for two reasons.

First reason being is because it’s a story about transcending prejudice and racial stereotypes which breaks down the propped up charade that humans must be divided based on skin color and other “us vs. them” tactics.

The second reason is that it shows the true power of people policing themselves. Responsibly arming themselves and practicing their Second Amendment rights, these well-armed gun owners were able to do what thousands of national guardsmen, police and FBI were unable to do, prevent looting and damage to property.

Matt Agorist is an honorably discharged veteran of the USMC and former intelligence operator directly tasked by the NSA. This prior experience gives him unique insight into the world of government corruption and the American police state. Agorist has been an independent journalist for over a decade and has been featured on mainstream networks around the world. Agorist is also the Editor at Large at the Free Thought Project. Follow @MattAgorist on Twitter, Steemit, and now on Minds