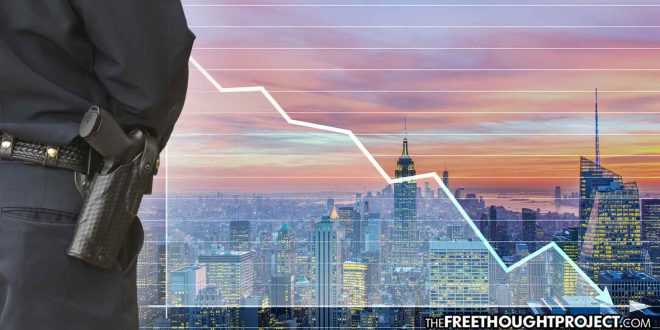 Atlanta, GA — The arrest and murder of George Floyd last month set off one of the largest protests in American history. Unfortunately, they were not all peaceful and many places saw rioting and destruction as many communities found themselves unable to contain their rage. Atlanta, Georgia was one of these places. After the protests began to subside, however, something quite telling began to happen in the city. Crime dropped dramatically.

Prior to Atlanta officers killing Rayshard Brooks in a botched DUI stop, crime began plummeting. Even after the brief unrest from protests due to Brooks, crime was still on the decline.

Though many officers from the APD called in sick after the cop who killed Brooks was charged, records show they were refusing to do their jobs well before this.

According to a scathing report from WSB-TV, prior to police killing Brooks and throwing a collective temper tantrum, traffic stops were already down a whopping 80 percent. When cops aren’t extorting people for victimless crimes like window tint, license plate lights, seat belts and other arbitrary “offenses,” there is no need to “defund police” because this will do that for them.

The union representative who spoke to WSB-TV said the officers are refusing to do their jobs because they are scared to be put in jail if they hurt someone. Seriously.

“It’s a reflection of the officers’ nervousness or, you know, hesitation to be the next officer that’s put in jail,” said Vince Champion, with the International Brotherhood of Police Officers. “When you approach a car, you have absolutely no idea what’s going on.”

He’s right that you do not know what is going on but the overwhelming majority of police interactions are for traffic stops in which there is no victim and both begin and end peacefully. However, many of these stops are used as a pretext for fishing for other alleged criminal acts, which is why the protests began in the first place as statistics show they are targeted more toward minorities.

This is a fact Champion has no problem admitting but implies citizens should be worried because it is not happening.

“Those officers who would’ve been pulling over the suspicious vehicles, patrolling the neighborhoods, getting out with people at two or three o’clock in the morning wandering in yards and things like that, so we might be able to do proactive and stop that. I don’t know that that’s being done as much as it used to,” Champion said.

Records show that in the week starting six days before the Brooks shooting, Atlanta police made just 709 traffic stops citywide.

That’s a drop of 79% from the same week a year ago. And it was more than traffic stops.

Arrests for serious offenses such as rape, armed robbery and murder dropped 64% that week compared to a year earlier.

And guess what….Atlanta did not descend into chaos once police stopped making arrests. It is highly irresponsible for police to stop arresting murderers and rapists and if they are refusing to do so, they need to be immediately fired. However, it is likely a mixture of both. A city spokesperson actually confirmed that crime was in a decline before cops refused to arrest people and before the protests began.

“APD attributes the reduction in crime predominately to a week over week reduction that had occurred since the start of the COVID-19 pandemic — in addition to the curfew,” the statement read.

However, the curfew ended 7 days before the period mentioned in the drops above, implying that people appear to be policing themselves quite well.

As TFTP has reported before, even when cops simply refused to do make arrests and write tickets when citizens were on the streets, cities do not simply descend into chaos.

In September, the NYPD threw a temper tantrum after Police Commissioner James O’Neill fired the killer cop who choked the life out of Eric Garner on video in 2014. The temper tantrum resulted in a plunge in arrests, but it did not lead to a spike in crime or violence — illustrating how most of the “policing” done in the US, is little more than revenue generation.

We saw a similar reaction in December 2014 when the NYPD threw their first temper tantrum over the reaction to Eric Garner’s death and simply stopped doing their jobs.

During the work stoppage, the city set a record for the lowest numbers of murders in the history of the NYPD.

As we reported at the time, the numbers were drastic in nature.

Summonses for low-level offenses like public drinking and urination also plunged 94 percent — from 4,831 to 300.

Drug arrests by cops assigned to the NYPD’s Organized Crime Control Bureau — which are part of the overall number — dropped by 84 percent, from 382 to 63.

The decline in crime coinciding with the decline in police activity essentially made the case that most policing carried out in the United States is done so for the purpose of revenue collection and not to fight crime.

Drug offenses, parking violations, and traffic citations are not so much crimes, as they are streams of revenue for the city. They are also the reason for the majority of police harassment within particular communities; harassment that is being proven entirely unnecessary.

Imagine a police force that acted more like firefighters or EMTs. Firefighters don’t have to go door to door looking for fires, in order to be effective. EMTs, just like firefighters wait for a call before reacting and their services are oft proven invaluable contrary to that of police work. Perhaps this recent chaos can be used to channel this notion to the forefront and completely revamp the idea of policing in the land of the free. One can certainly dream.