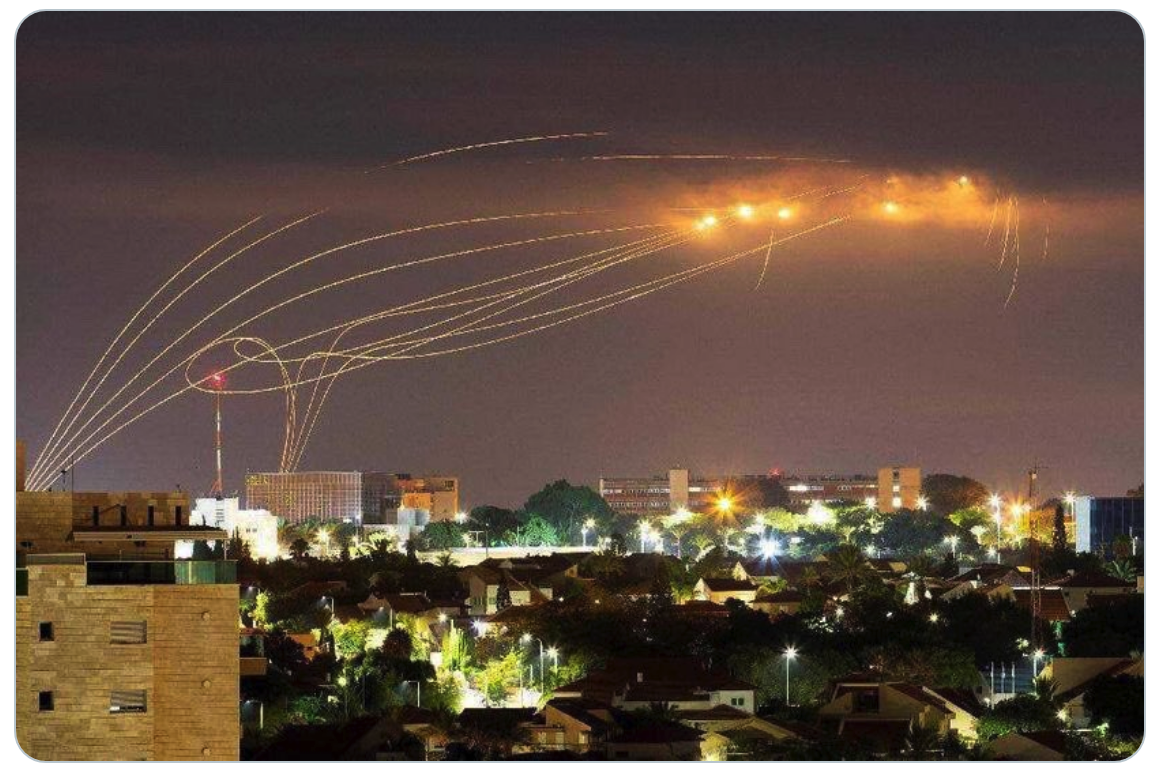 Residents of Gaza spent the night cowering in fear as a series of dramatic airstrikes destroyed buildings used by Hamas terrorists. We have never seen anything quite like this, and the Israelis haven’t shown any signs that they plan to let up any time soon. In fact, Prime Minister Benjamin Netanyahu is saying that the IDF “will continue to operate as long as needed to restore quiet and security to all Israelis”. That could take a while, because Hamas just keeps firing even more rockets into Israel. On Monday, Hamas rockets forced Israeli citizens into bomb shelters in the cities of Ashdod, Ashkelon and Beer Sheva

On Monday, a fresh barrage of rockets from Gaza once again set off sirens and sent Israelis fleeing into bomb shelters in Ashdod, Ashkelon and Beer Sheva. At least one residential building in Ashdod was hit, the IDF said.

If Hamas really wants the fighting to end, they should stop firing rockets at Israeli cities.

But instead, they just keep doing the exact thing that they know will cause the Israelis to attack them. Hamas fired 200 more rockets into Israel on Monday, and the grand total for the conflict is now above 3,300…

The Israeli military said late on Monday that Hamas and other Palestinian groups had fired about 3,350 rockets from Gaza – 200 of them on Monday alone – and that Israeli air and artillery strikes had killed at least 130 militants.

Of course Hamas insists that they were just responding to attacks by the IDF earlier on Monday. According to USA Today, those attacks destroyed the personal homes of nine Hamas commanders…

The Israeli military unleashed another heavy wave of airstrikes Monday on the Gaza Strip, saying it destroyed militant tunnels and the homes of nine Hamas commanders. International diplomacy to end the weeklong war that has killed hundreds appeared to be making little headway.

Originally, I had thought that the fighting would subside during the early part of this week as Israel celebrated Shavuot.

I was wrong about that.

Instead, the fighting has only intensified, and it threatens to spill over into other arenas.

For example, global media outlets were deeply alarmed when six shells were fired from Lebanon toward Israel…

Around midnight, six shells were fired from Lebanon towards northern Israel, but fell short of crossing the border, the Israeli military said, adding that it fired artillery at “the sources of the launches” in Lebanon.

If Hezbollah were to join this war, that could completely change the nature of this conflict.

Hezbollah is far better organized and far better armed than Hamas is, and it has been reported that Hezbollah currently has at least 150,000 missiles pointed at Israel.

So we need to watch developments in Lebanon very carefully, because if Israel and Lebanon start lobbing missiles at one another, things will start to get “apocalyptic” very quickly.

Elsewhere, Turkey is making a lot of noise about the conflict between Israel and Hamas. In fact, the president of Turkey just publicly declared that “84 million Turks will continue to defend Jerusalem”.

That is not the sort of statement that you would make if you are hoping to calm things down.

Of course Iranian officials continue to hurl hateful words at Israel, and those two nations have been on the brink of war for quite some time.

Eventually, war between Israel and Iran is coming, but hopefully that day can be put off for as long as possible.

Because when it does finally arrive, it will be a truly horrific conflict.

The fighting that we are already witnessing between Israel and Hamas is certainly horrible enough, and officials all over the globe are crying out for peace.

In recent days, Israel has been endlessly criticized by corporate media outlets for the death and destruction that has happened in Gaza, but the truth is that the IDF has been far more kind and far more gentle than I would have been.

Most of the time, before the IDF destroys a building that terrorists have been using, it sends a warning first so that everyone can safely evacuate. The following is just one example…

The Israeli military has struck a six-story building in Gaza with a “roof-knock” bomb, indicating that Israeli forces intend to demolish the structure.

It is not immediately clear why the structure, al-Muhannad Tower, has been targeted by the Israel Defense Forces. Israel says it targets buildings used by Hamas or other Gaza terror groups.

Who else in the world does such a thing?

If I was conducting a war, I certainly wouldn’t give my enemies advance warning before I hit a target.

The IDF has gone to extreme lengths to minimize civilian casualties, and yet we have seen an explosion of anti-Semitism all over the globe in recent days. In London, some of the language being used by anti-Semitic protesters is beyond sickening…

People have been filmed driving through London in a convoy of cars shouting antisemitic obscenities.

One of the passengers yelled ‘**** the Jews, rape their daughters’ through a loudspeaker as they drove through residential areas.

Video was filmed in Finchley Road, St John’s Wood, near a Jewish Community centre, with the man claiming ‘We have to send a message’.

Sadly, we saw crazed pro-Palestinian protesters gather in major cities all over the western world this weekend, and that included major U.S. cities such as Chicago and New York.

I have never seen as much anti-Semitism around the globe as I am seeing right now, and that is truly, truly frightening.

Even a CNN contributor was caught making a very hateful statement that should have been unthinkable for someone in his position to ever utter.

Our world is so full of hate, and now a war in the Middle East has erupted.

These are very dark times, and a lot more death and destruction is on the horizon.