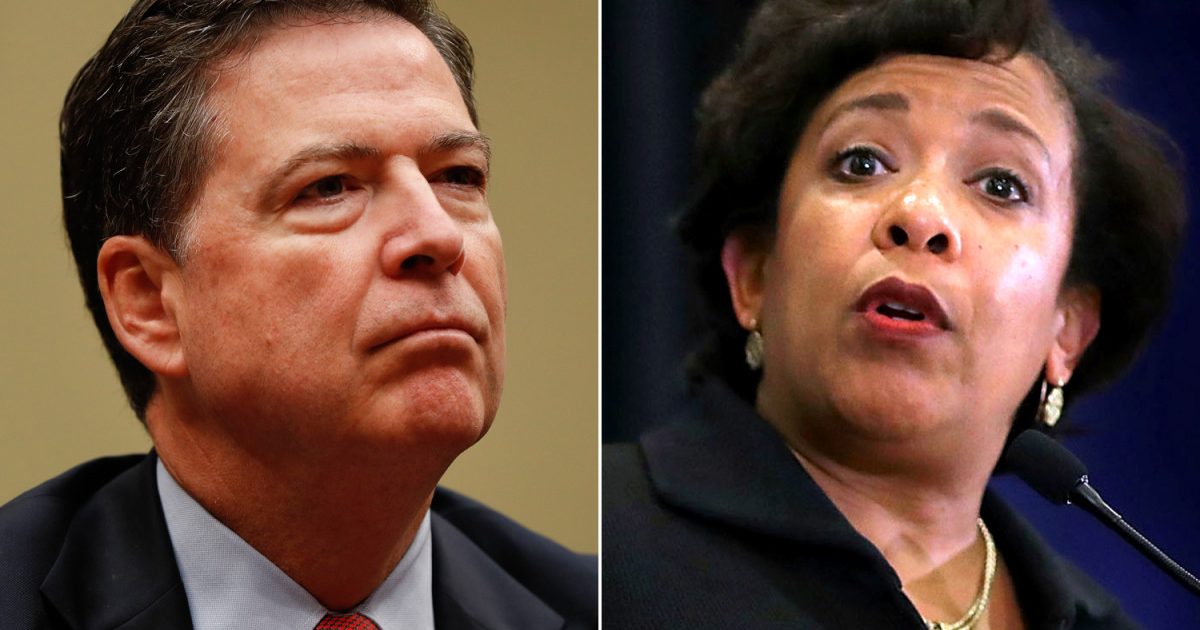 Seriously, this has become more like a soap opera, not a circus. The people entrusted to bring justice have done anything but that concerning Hillary Clinton and we already knew that Loretta Lynch was a Constitution violator before she stepped into the Department of Justice. James Comey has obvious problems with integrity as well. Now, Lynch is contradicting Comey’s claim that he was to refer to the Clinton email investigation as a “matter,” and it looks like one of them committed perjury.

This information comes as a result of her closed-door testimony before Congress.

In December 2018, Lynch denied the claims made by Comey in his 2017 testimony before congressional investigators that she instructed him to refer to the investigation into Clinton’s unlawful use of an illegal email server and subsequent mishandling of classified information via that server.

“I did not,” Lynch said. “I have never instructed a witness as to what to say specifically. Never have, never will.”

“In the meeting that I had with the Director, we were discussing how best to keep Congress informed of progress and discuss requesting resources for the Department overall,” she added. “We were going to testify separately. And the concern that both of us had in the meeting that I was having with him in September of 2015 was how to have that discussion without stepping across the Department policy of confirming or denying an investigation, separate policy from testifying.”

“Obviously, we wanted to testify fully, fulsomely, and provide the information that was needed, but we were not at that point, in September of 2015, ready to confirm that there was an investigation into the email matter — or deny it,” Lynch continued. “We were sticking with policy, and that was my position on that. I didn’t direct anyone to use specific phraseology.”

However, that is not what Comey testified to in 2017.

At that time, Comey told Congress under oath, “The attorney general had directed me not to call it an investigation, but instead to call it a matter, which confused me and concerned me. That was one of the bricks in the load that led me to conclude, ‘I have to step away from the department if we’re to close this case credibly.’”

“The Clinton campaign, at the time, was using all kind of euphemisms — security review, matters, things like that, for what was going on,” Comey added. “We were getting to a place where the attorney general and I were both going to have to testify and talk publicly about. And I wanted to know, was she going to authorize us to confirm we had an investigation?”

Well, it looks like we have one of these people committing perjury. The question is, which one? My guess is that it’s Lynch in this matter.

The next question we have to ask is, will the current DOJ have the stones to actually prosecute the perjury, or will they attempt to sweep this under the rug and use it for political fodder and driving people to the voting booths in 2020.

Time will tell, but we know that sooner or later, if it was Lynch, the outing on Comey and his coverup of Hillary Clinton’s crimes is very close to being exposed with the FOIA lawsuit filed by Judicial Watch to obtain his talking points provided by the FBI in charts.