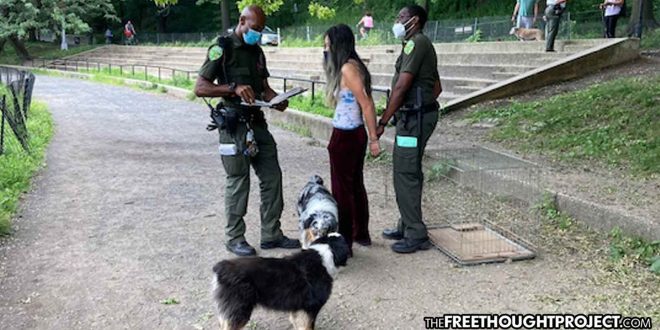 New York — According to the New York Police Department’s most recent statistics, overall crime is on the rise. The city has experienced a 22% surge in overall index crime compared to the same time last year. As assaults, murders, and robberies go unsolved at an increasing rate, however, some officers in the state are making sure to take the hardest of criminals to prison — including an evil woman who would dare walk her tiny dogs in a park without a leash.

As stated above, violence crime is up 22% from last year, with shootings spiking up over 70%. The clearance rates for crimes are also down, meaning police are solving less crimes. Instead of correcting these numbers, officers in New York’s Upper West Side appear to be going after the low hanging fruit.

According to LinkedIn, Dora Marchand, an alum of Portland State University between 2012-2016, works at iCloudNexus Companies in San Francisco’s Bay Area. “An upbeat hard-working professional with a passion for recruiting, relationship building, and technology that surrounds us in San Francisco and the Bay Area. Reach out if you have a hiring need, are seeking information about the job market, are looking for new opportunities yourself, or even just to get a grasp of the San Francisco/Bay area.”

She is hardly a criminal. Nevertheless, last week, as she walked her dogs at the Riverside Park in the Upper West Side, Marchand was confronted by two officers who immediately placed her in handcuffs for reportedly not having an ID on her as well as walking her dogs without a leash.

According to state law, it is against the rules to walk your dogs without a leash. While that is certainly a necessary law, considering some dogs are massive and potentially vicious, Marchand’s two mini Australian shepherds, Comet and Sophie, are hardly the dangerous type.

According to Marchand, one officer actually used his discretion and told her that she was in violation of the ordinance and that she would not be fined but she needed to leave.

“He was just like, ‘OK, you don’t have a leash. Just don’t do it again.’ He gave a warning,” Marchand told the NY Post.

She complied and was leaving park, when another officer, apparently attempting to bolster the state’s declining policing stats, then stopped her once more. She would not be as lucky this time around.

“And then this other guy came across a field, I guess that’s like his partner, and he was like, ‘No, no, no, we’re gonna have to write you up,’” she said.

Richard Baron Penman, who was out jogging that day, told the West Side Rag that the way police treated her was “disturbing.”

“It was disturbing how they treated her like a dangerous criminal pulling her around by the handcuffs. It was so unnecessary,” Penman recalled.

As these “hero” officers tried to figure out what to do with Marchand and her dogs, Marchand was kept in handcuffs for two hours at the park while the officer tried to coerce the dogs into a cage.

“It felt like he was a man having a power trip. There was no calming him down,” Marchand said. “I was in the handcuffs for two hours while the officers were figuring out what to do with my dogs since they could not be taken to the precinct.”

While the cops humiliated her in front of other park goers for two hours, off camera, one of them can be heard explaining how he would happily use an electric shock stick to get the dogs into the cage.

“He was excited about the rangers having the electric sticks or something to shock. He was like, ‘Oh, yeah, they’re gonna get them. It’s gonna work,’ ” Marchand recalled.

Despite Marchand calling her boyfriend and having him bring her ID to the park, the officer decided to bring her to jail anyway. She was held in a cell for an hour before being released with two citations — one with a fine of $200 for not complying with officers and $100 for having the dogs off-leash, she said.

Hopefully, the citizens of New York feel safer knowing these officers are out there on the street.