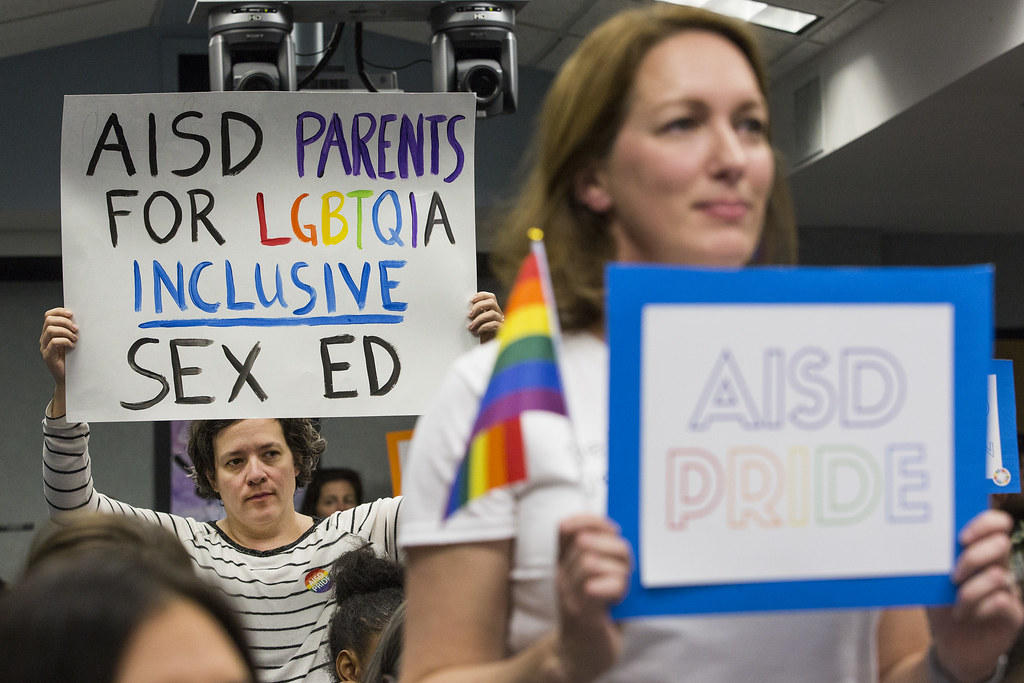 Here is a video that I found, leading up to the vote, which shows scenes from Monday Night.

The vote actually happened in the early morning hours on Tuesday.

The curriculum spans grades three through eight. Under the new curriculum, for the first time, the district will teach students about gender identity and sexual orientation. The lessons will also help kids identify an adult they can trust; plus talk to them about options if they get pregnant, and seventh graders would learn how to use a condom.

At the school board meeting Monday, the two groups held dueling rallies outside school district headquarters.

Demonstrators first showed up for rally organized by Texas Values, which opposes the proposed changes.

Those supporters include Informed Parents of Austin, a group of AISD parents advocating for “policies in the Austin Independent School District that pertain to the LGBTQ community.” The group’s mission also includes working to “counter the efforts of any group which has a mission of removing anti-bullying and equality policies from AISD.”

Did you notice that they UNANIMOUSLY approved?

This is a shock to everyone, of course, but it makes sense that it happened in a liberal safe haven like Austin, TX.

Todd Starnes has this:

The sex and gender revolutionaries have officially taken over the Austin Independent School District without firing a single shot.

“Who gave you the right, Austin ISD? You have overstepped,” the rightfully frustrated dad said.

The radical sex education policy will provide graphic instruction on gender identity and mandated support of the LGBT movement.

Students in grade school and middle school will also be taught how to get an abortion or obtain birth control pills without parental permission or consent.

Read the Rest at ToddStarnes.com…

If liberals have their way, this will happen in every large city in America and it is likely just a matter of time.

If you live in a large city and don’t want your kids to deal with this insanity, you have three options:

Staying in large cities, like Austin, is simply a surrender to living among those who support perversion and all things NOT American.

In Austin, 3rd graders will be taught about homosexuality and in San Francisco 5-year-olds are protesting Trump.

In Seattle, kids are having the Quran shoved down their throats.

There is no protecting your children in a metropolitan school system.

They will be exposed to filth.

As parents we must teach kids at home the lessons that will counteract the evil agenda of the left.