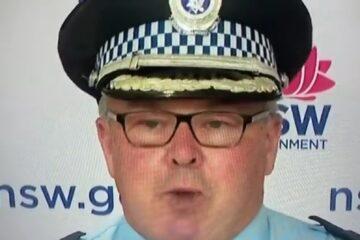 On Tuesday morning’s The Sons of Liberty radio show, I highlighted a video out of New South Wales (NSW) in Australia in which it was stated that children were being targeted for the injection of a bioweapon into their bodies and that parents had nothing to fear, just trust the tyrannical government that has trampled on their rights. Now, I’ve come across another NSW Gestapo thug that said they were actually hunting down a man because he was not at home when they came to check on him and discovered he was out “getting fresh air.” Tin hat tyrant then declared that kind of “behavior” will not be tolerated and the person must comply!

Tyrants Targeting Children Under The Guise Of Health & Safety – What Are You Doing About It?

It seems that NSW is the prototype for the New World Order.

Take a listen to these guys and wonder not at why you should not disarm yourselves for any reason under the sun.

This is the Benny Hill look alike that thinks “getting fresh air” is somehow “behavior” that needs to be changed.

Remember, several Australian new broadcasts stated back in March 2020 that the New World order would not only go into effect, but was “in effect.”

TRENDING: Watch This 43-Minute Documentary Explain How Central Bankers Are Behind All Wars [VIDEO]

And let’s not forget that we have a doctor on video stating they have 5 days to “deliver the virus” while the Australian Health Minister says that the peopel are in the midst of the New World Order.

Doctor Says They Have 5 Days To “Deliver The Virus,” Aka “Vaccine” As Australian Health Minister Provides Freudian Slip Of “New World Order” (Videos)

As people from around the world are protesting these tyrannical measures over something that governments have yet to produce a single shred of evidence that it exists, Australians are the ones feeling the boot of the tyrants when they take to the parks and streets in protest.

Standing Up Down Under: Arrested For Promoting Peaceful Protests

We had better be standing and opposing the tyrants here in the States before it goes that far! Time is short! Duty is ours! The results are God’s!

Article posted with permission from https://sonsoflibertymedia.com/australias-nsw-seems-to-be-the-prototype-of-the-nwo-targeting-children-with-bioweapons-hunting-down-people-for-behavior-of-getting-fresh-air-videos/