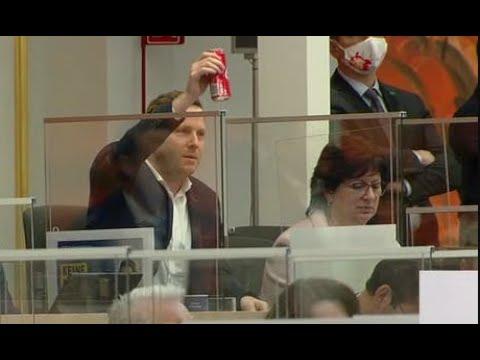 It’s amazing the lies that governments, Big Pharma and professional liars are attempting to feed the people despite the truth that is before anyone that wants to open their eyes and ears. The latest comes out of Austria where a member of the Austrian Parliament tested a can of cola for COVID in front of his colleagues. Guess what he discovered.

Take a look as this guy demonstrates how defective the CONvid test actually is.

In footage from the meeting in Vienna Friday, FPO General Secretary Michael Schnedlitz brings a glass of cola to the podium, from which he proceeds to collect drops to use on an antigen rapid test being used on a mass scale.

After going to the lectern and starting his speech, the politician sprinkled a corona rapid test with a few drops of cola. Three minutes later the test showed a result: It was positive. So Coke triggered such a result.

After demonstrating a positive result, Schnedlitz goes on to slam the tests as a waste of taxpayer resources.

“Mr. President, we are likely to have a problem now, we have a positive corona test in parliament, namely this cola triggered a positive corona test. I don’t know how to deal with it now! With things like this you are throwing tens of millions of euros in tax money out of the window instead of providing real protection for old people and nursing homes, instead of investing money in our hospitals.”

“A ‘dictatorship light’ was set up by the ÖVP and the Greens and the Austrians Their fundamental rights, such as their civil rights and the right to freedom of expression – specifically, illegal ordinances were issued and the authorities were asked to take action against their own people. ”

“Today I did a corona test live in parliament,” reads Schnedlitz’s post, translated from German. “The corona mass tests are worthless! This was also shown by a simple experiment in parliament, in which a cola had a positive result! But this black-green government spends tens of millions in tax money on precisely these tests.”

Following the experiment, another Austrian politician, ÖVP General Axel Melchior, dismissed Schnedlitz’s claims, and accused him of being drunk.

“You, I really do not understand what you are doing. I had the whole time hoped that this was not a Cola, but Bacardi-Cola – that would have justified your behavior a bit,” Melchior said, to which Schnedlitz responded by holding up his can of Coca Cola.

Clearly, if people just listened to Dr. Kary Mullis, the man who created the PCR test, they would know how they are having the wool pulled over their eyes.

Tim Brown is an author and Editor at FreedomOutpost.com, SonsOfLibertyMedia.com, GunsInTheNews.com and TheWashingtonStandard.com. He is husband to his “more precious than rubies” wife, father of 10 “mighty arrows”, jack of all trades, Christian and lover of liberty. He resides in the U.S. occupied Great State of South Carolina. . Follow Tim on Twitter. Also check him out on Gab, Minds, MeWe, Spreely, Mumbl It and Steemit
(Visited 27 times, 1 visits today)
Share
Tweet
Share
Pin