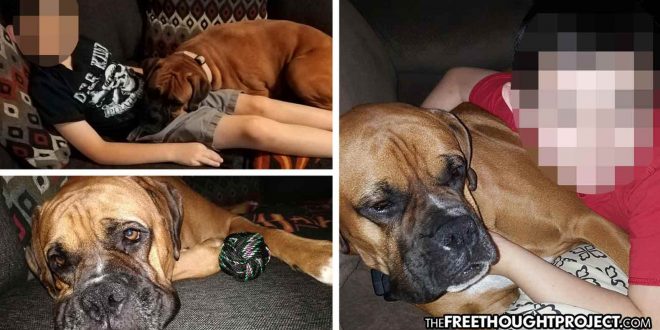 Alexandria, LA — A therapy dog was shot and killed by inept police officers in Rapides Parish after they served a no-knock search warrant on the wrong address. The family pet, a boxer, served as an alert dog for the family’s son when he was having seizures.

Laura Lavergne posted on Facebook the news her family’s beloved boxer was shot and killed by overzealous Rapides Parish Sheriff’s Department deputies who could not even find the correct home to invade. Not only was the family’s dog shot but they were all detained for several hours, imprisoned in their own home. She wrote:

Monday afternoon Rapides Parish Sheriff’s Office and Metro Narcotics division shot and killed our beloved 5 year old boxer ten feet from my front door, mere seconds after we even realized anyone was on our property.

The home invasion, kidnapping, and killing of the family pet happened without anyone ringing a doorbell or announcing their presence, aka a “no-knock search”. No-knock searches can be some of the most deadly for citizens as well as police officers.

There was no announcement of who they were or that they were here. I heard Loki barking and opened my front door to see what it was, and saw several officers standing a few feet from my door.

We at TFTP have heard the following story many times before. Just as in our past stories (see our dogs shot by police archives), the family notified the police officers they could control their boxer and were in the process of doing so when a trigger-happy cop shot the dog which was contained inside an invisible fence.

I couldn’t imagine why police were at my home and I had received no information or commands, so I told them to hold on so I could get my husband to contain our dog. Tony went out the door to grab him and 2 seconds later I heard several gunshots.

Lavergne’s husband was reportedly held at gun point as well and could have been shot like his boxer had he let his emotions get the best of him. Lavergne wrote:

In the midst of the chaos and shooting and death of my dog, an officer pulled a gun on my husband as well. We were so shocked and devastated it really didn’t hit me until today how much danger we were in too. Had my husband not been able to control his emotional state after seeing our dog murdered feet away from him, he might have been shot too.

The family’s son has now lost his best friend who was a gifted boxer who let the family know when the son was having a seizure.

He was my son’s best and only friend in a world that he doesn’t feel acceptance in. He was incredibly smart, he alerted us several times when Hunter had a seizure in another room.

Lavergne now says her trust in law enforcement has been destroyed.

Anyone who knows me, knows that I’ve always been supportive of law enforcement. After this, none of us will ever be able to put our trust in that again.

No-knock search raids should never take place except in the rare instance of hostage situations. Not only have politicians spoken out about the inherent dangers of men with guns, dressed in black, blasting their way into citizens’ homes with no notice, but police officers have been killed by citizens defending their home under the Castle Doctrine.

Yes, America, police will come onto your property, shoot and kill your dog, and there’s not a damn thing you can do about it. We even covered the story of one homeowner being forced to cut off his own dog’s head by an overzealous cop who killed him. We can’t make this stuff up folks.