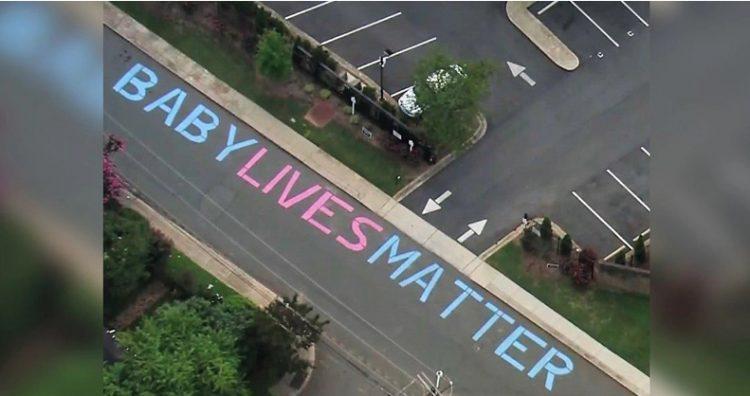 It’s incredibly ironic that a “Baby Lives Matter” mural would be painted on the streets outside Planned Parenthood. Yet, that is exactly what happened in Charlotte, North Carolina.

Considering that Planned Parenthood murders more black children than any other ethnicity in the US and its founder promoted the “weeding” out of negroes, it stands to reason that someone would take the opportunity to use the BLM narrative to expose the crimes of Planned Parenthood. And someone has done just that.

WBTV has the story.

WBTV’s Sky 3 observed the mural from above. WBTV reached out to the Charlotte-Mecklenburg Police Department to see if there was any response to this mural.

They responded and said on Wednesday, CMPD officers went to South Torrence Street in reference to a call for service regarding vandalism in the street.

Police say the incident is being investigated, and they have also made appropriate notification to the Charlotte Department of Transportation.

The vandalism is being investigated by the Charlotte-Mecklenburg Police Department. https://t.co/lIFKhgpdIQ

Interesting to note that while the mural is similar to ones celebrating “Black Lives Matter” in major Democrat-run cities across the country, the message promoting life is instead being investigated as an act of vandalism.

So it’s vandalism when it doesn’t meet your narrative?

“So it’s vandalism when it doesn’t meet your narrative?” noted one keen Twitter user.

The “Baby Lives Matter” message riffs off the Black Lives Matter mantra to call attention to the millions of babies killed in abortion clinics each year.

In this case, the message takes on special significance as it’s painted outside Planned Parenthood, the abortion provider credited with killing millions of black babies that’s finally having to face the “racist legacy” and “eugenic ideology” of its founder, Margaret Sanger.

Indeed! The Black Lives Matter movement, which is a contrived politically funded insurrectionist group with a definite agenda, won’t actually take a stand for the innocent black lives of the unborn in the black community. Rather, they thrive on it because they don’t realize just how much control they are under.

Someone was definitely making a statement here. However, it wasn’t the propaganda of the Black Lives Matter movement, but rather a real message of life, liberty and justice, the very things our country was founded upon.