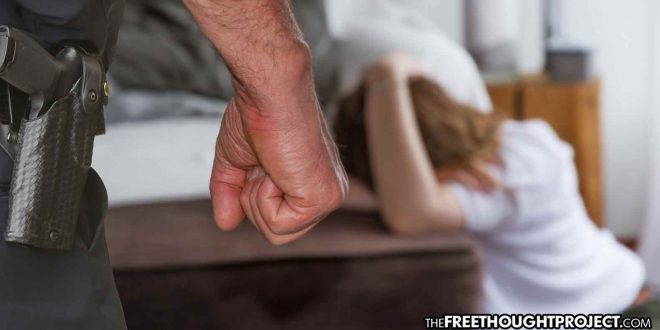 St. Louis, MO — The number of women who accuse four St. Louis police officers of raping them currently stands at seven. Three of the women are police officers themselves. All seven are now seeking justice against the cops they say raped them.

Allegations of rape by the cops go back a decade. After the women came forward the St. Louis Police Department placed four officers on administrative duty. They will all be receiving their salaries as the investigation progresses. According to KSDK News, at least one of the cops allegedly drugged and raped his fellow coworkers:

So far, multiple victims have come forward with accusations against the officers, including allegations that some of them were drugged and then raped, according to documents obtained by 5 On Your Side. One of the officers is accused of sexually assaulting six women – four of them were police department employees, including civilians and officers, according to the documents.

Unfortunately, the identities of the officers is being protected by the department while the allegations are being investigated — supposedly. But much is known about the allegations which we at TFTP will now summarize for our readers.

The first female officer said she was raped by a St. Louis PD officer on January 17th. She reported the crime to internal affairs claiming the alleged rapist cop had his way with her in the back of his truck outside Mimi’s Subway Bar & Grill in Ferguson at about 1:30 a.m. The St. Louis County Police Department has been conducting the criminal investigation while the St. Louis County Prosecuting Attorney, Wesley Bell, reportedly is gathering all the available information on the alleged rape.

A former police department employee (civilian or officer status unknown) reported to police she had been raped some time between 6 and 8 pm on the 15th of December 2019. No further information is known at this time about her allegation. The same officer was accused twice of rape in 2010 (once by a fellow female officer) and again in 2012 but was somehow allowed to keep his position within the police department. To be clear, the St. Louis police officer is accused of raping four women over a 10-year period. He can only be characterized as an alleged serial rapist at this point, if the allegations are true, allowed to keep his job presumably because of his badge. KSDK described the 2012 incident:

[The victim] said this officer sexually assaulted her while she was unconscious inside her West End neighborhood apartment. In that case, the victim told police she confronted the officer about his actions, but that he left her apartment without explaining himself. She reported her case to police in 2012 and to Internal Affairs four days after it happened.

Not to be the only cop raping women all by himself, the officer we just described is also accused of raping another woman in 2010 alongside a fellow male officer in gang-rape fashion inside his own home. That alleged rape was also reported to Internal Affairs but just like the other four women he is accused of raping, nothing happened to either officer. Neither one was criminally charged and their rape complaints were sealed.

A fourth officer was accused of date rape on Aug. 7, 2016. She said it all started out as consensual but later she tried to end the sexual encounter but allegedly was raped anyway.

Our suspicion is there are many more victims out there, especially by the second police officer who seems to be a serial predator. If you or anyone you know has ever said they were raped by a St. Louis cop, now is the time, it seems, to make your case heard. Instead of calling the police department in St. Louis to report the crime, contact the local FBI office at 2222 Market St, St. Louis, MO 63103. Or call their number at (314) 589-2500.

Unfortunately for the women who’ve accused their officers of the peace with violating them in the most personal of ways, the St. Louis County prosecutor’s office also has a history of protecting alleged rapist cops. In 2018, a woman who had been fighting to have her alleged rapist cop prosecuted was herself charged with slandering the good officer’s name. As far as we can determine at this point, none of the officers mentioned in this report have been indicted for rape.