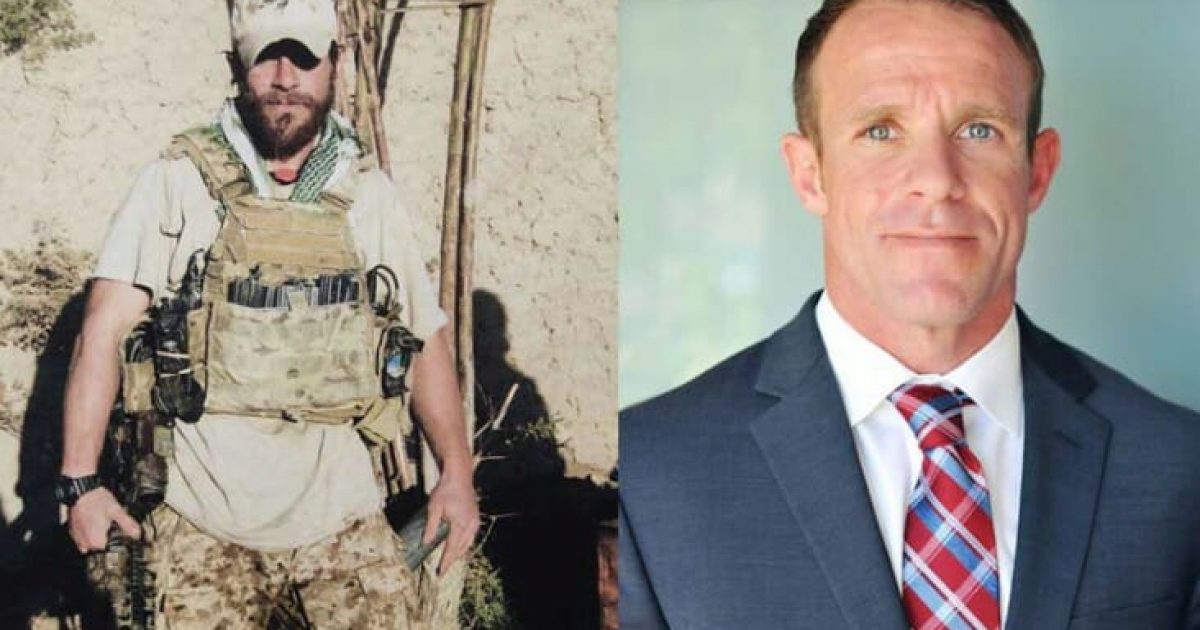 Chief Gallagher has been charged with mistreating an ISIS terrorist during combat operations!

On Patriot’s Day, Sept 11th 2018, NCIS snatched Chief Gallagher in the midst of TBI treatment, shackled him, kept him shackled in solitary confinement for 72 hrs.

He has been in pre-trial confinement for over 4 months and counting.
Chief Gallagher has been Indefinitely Detained, repeatedly denied access to medical care, and has limited access to his attorneys.

In the case of Eddie Gallagher, charged with the murder of an ISIS detainee, there is little to no physical evidence of guilt. There is no autopsy or body to show that a murder even occurred. Instead, the case is built solely on the claims of a few junior SEALs, who did not report the alleged incident for months, and only started making claims after Chief Gallagher reported them for cowardice in combat and his genuine concerns over their ability to perform the mission.

In the civilian justice system, prosecutors are required to present evidence to a grand jury, who votes on whether there is probable cause to bring an indictment. In the military, rather than a grand jury, a single officer presides over an Article 32 hearing, where evidence is presented and that officer, usually an attorney, decides whether there is probable cause to proceed with charges. On paper, this may seem fairer than a grand jury because the defense can be present and even cross-examine the witnesses. But the reality is a bit different because the hearing officer prepares an advisory opinion and the convening authority can either accept or reject their recommendation. To put that into context, imagine a civilian prosecutor presents evidence to the grand jury, who finds that there is no probable cause to charge the defendant, but the prosecutor’s boss can ignore that decision and proceed with charges anyway.

IN CHIEF GALLAGHER’S CASE, THIS IS EXACTLY THE SITUATION THAT OCCURRED. THE OFFICER WHO HEARD ALL OF THE EVIDENCE AT HIS ARTICLE 32 HEARING FOUND THAT SOME, BUT NOT ALL, CHARGES WERE SUPPORTED BY THE BARE MINIMUM EVIDENCE TO CONSTITUTE PROBABLE CAUSE. SPECIFICALLY, THE HEARING OFFICER FOUND THAT THE EVIDENCE WAS INSUFFICIENT ON TWO COUNTS OF ATTEMPTED MURDER, WHERE CHIEF GALLAGHER ALLEGEDLY SHOT AT, BUT DID NOT HIT, TWO NON-COMBATANTS ON THE STREETS OF MOSUL. EVEN THOUGH THE HEARING OFFICER, WHO IS AN ATTORNEY, FOUND NO PROBABLE CAUSE, THE CONVENING AUTHORITY, WHO IS NOT AN ATTORNEY, REJECTED THIS CONCLUSION AND DIRECTED THAT CHIEF GALLAGHER FACE THESE TWO COUNTS OF ATTEMPTED MURDER AT TRIAL.

Contact your Congressperson here. If they are Democrat, I am sorry for you. Best way to contact? Phone calls.

Donate to the Navy Seals Fund here. 100% of the donations raised by this campaign will be used to defend Chief Gallagher and provide support for his family as they fight for Justice.

I wrote to you on December 11, 2018 (encl) asking for your help for Navy Seal Chief Edward R. Gallagher, currently “still” held in the Navy brig in California. Seven weeks have passed, and I have not received a response. President Trump, dare I infringe on the great progress you are making for our country, but I must. This matter is urgent.

Chief Gallagher has been locked up in the brig in California now for almost 6 months. He was taken out of TBI treatment, shackled and arrested on Patriot’s Day, September 11, 2018. Chief Gallagher is a Navy Seal, who served 19 years of decorated service, now charged with pre-meditated murder.

For the last 19 years, Chief Gallagher has risked his life to keep us all safe. Yet now he finds himself locked up in the brig and treated like a man already tried and found guilty. Due to his imprisonment, his ability to formulate any kind of decent defense is nil, and he is going to trial soon.

His wife and children are in Florida, the Chief is being held prisoner in California. Over the last 6 months, this Navy Seal has seen his wife three times, and his kids, once, on Thanksgiving Day. These are the same kids the government traumatized by pulling them out of their beds in their underwear, out in front of the neighbors, with their guns drawn!

Chief Gallagher’s kids are brave Patriots. They have said goodbye to their Dad many times since they were born, so that he could go somewhere dangerous to protect all of us. They miss him. I bet they are wondering how we could treat their Dad like this. Me Too.

I listened to your State of the Union speech Tuesday evening. It was wonderful. One part of your speech overwhelmed me. You told the story of Judah, who was there in your audience. Judah is a Holocaust survivor who remembers when the American Soldiers came and saved them all:

President Trump, the Chief needs to hear “It’s the Americans” as he is led out of the brig. He deserves to go home, to be with his family and be afforded all the rights to defend himself that he fought so hard to provide all of us.

With A Mother’s Heart & Great Respect,

The Band of Mothers