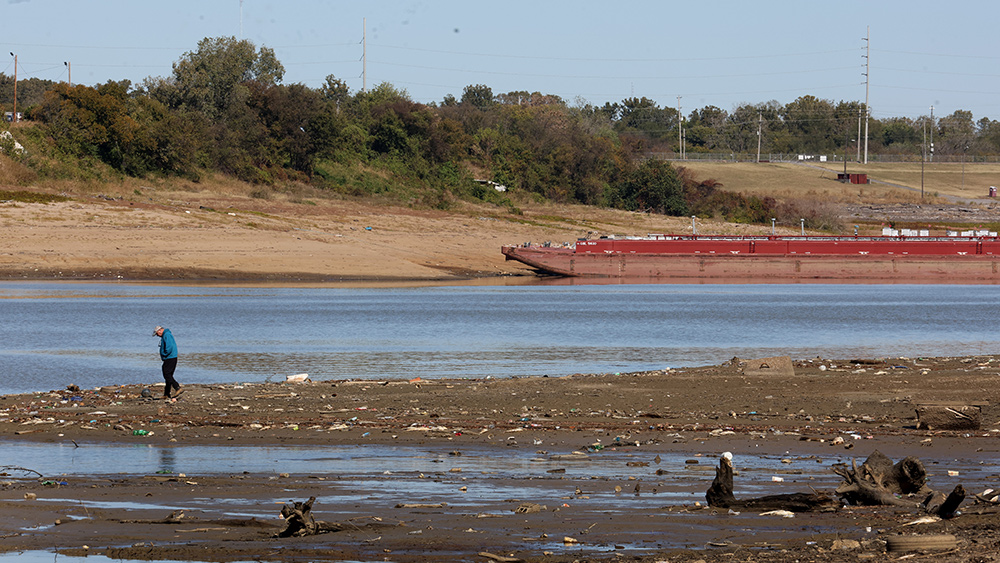 (Natural News) Things are getting worse, not better, for harvest transport across the Mississippi River, the nation’s second-largest waterway.

Regional drought conditions have made it impossible, in some spots, for barges carrying the fall harvest of soybeans, corn, and other commodities from farm to market, to pass.

In some areas, barges carrying large loads of crops are stuck in the mud, which is fast-becoming dry dirt as water levels continue to drop. (Related: Some sections of the Mississippi River are now completely closed because water levels are too low to allow for safe passage.)

Right now, the Mississippi River is at its lowest level in decades. And while workarounds to the problem are in progress, many are wondering if it will all be enough to make it through the harvest season.

“There’s no relief in sight as far as rainfall,” said Jeff Worsham, a port manager out of Osceola, Ark., where barges are backing up because others have run aground and are now in their way.

When asked when he believes much-needed rain will come, Worsham told the media, simply:

In Osceola, many barges are now “dead in the water,” reports indicate. Those following behind are having to load up much less crop to avoid suffering a similar fate.

Barges carrying soybeans, for instance, are only loaded to about 65 percent at most. This helps keep them from running aground in shallow waters where under normal circumstances they would be able to pass without a hitch.

I’ve never seen it this bad,” Worsham is quoted as saying, adding that he has worked at the facility for more than 20 years.

“We had water [levels] close to this in 2012. But it was August, and it wasn’t the harvesting season. It wasn’t a big deal for us.”

Worsham says he remains optimistic that more solutions will be found to overcome this crimp in the supply chain.

“A lot of the soybeans have been stored on the barges,” he says. “We’ll be down a little bit on volume and stretched out. We’ll be able to get the bushels [out]. It’s just going to take longer.”

Until a towboat can make it out to where the stuck barges are located in order to release them, the situation is unlikely to get any better – and will likely get much worse in the meantime.

“It’s more than hard,” Worsham laments. “They would get them [out] if they could … I don’t know what else to do.”

In October, some 2,000 barges were reported to be stuck somewhere along the Mississippi River, unable to pass due to their being stuck themselves or stuck behind other stuck barges that are unable to move in the current conditions.

In order to safely navigate, barges need around nine feet of water depth. In many areas of the drought-stricken waterway, water levels are much lower than that – if there is any water at all in those spots.

Another problem down around the Gulf of Mexico is that salty ocean water is washing back into the river, potentially contaminating drinking water supplies.

In an attempt to stop this, the Army Corps of Engineers is staying busy building new temporary levees to try to keep the ocean water separate from the river water, which is quickly receding.

Under normal circumstances, some 418 million tons of goods are transported via the Mississippi River annually. As water levels continue to fall, so does that tonnage, which spells disaster for the American economy.

The latest news about the downfall of the American economy can be found at Collapse.news.