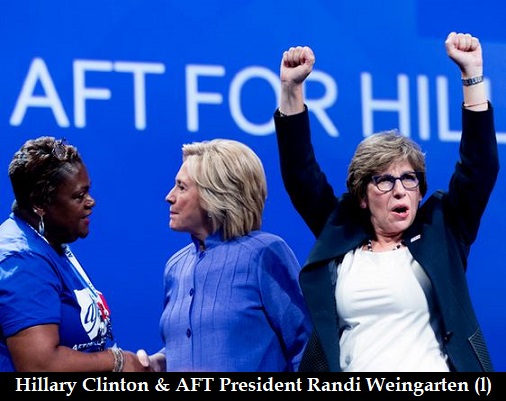 Founded in Chicago in 1916, the American Federation of Teachers (AFT) is the second largest teacher’s labor union in America, the largest being the National Education Association (NEA).

Since 1980, AFT and the NEA have contributed nearly $57.4 million to federal campaigns, an amount that is about 30% higher than any single corporation or other union. About 95% of political donations from teachers unions have gone to Democrats:

On June 27, 2018, in a landmark but narrow 5:4 decision in Janus v. AFSCME, the Supreme Court ruled that public sector union dues violate the First Amendment by compelling nonmembers to “subsidize private speech on matters of substantial public concern”. Unions will, subsequently, need to gain the affirmative consent of individual teachers before enrolling them in the AFT and NEA.

The Supreme Court’s Janus ruling led directly to the cancellation of membership by a substantial portion of teachers in the American Federation of Teachers (AFT).

Sean Higgins reports for Washington Examiner, Oct. 9, 2019, on the effects of the Supreme Court’s Janus v. AFSCME ruling in the year since:

Conservatives must remember this when you find yourself unhappy with President Trump: