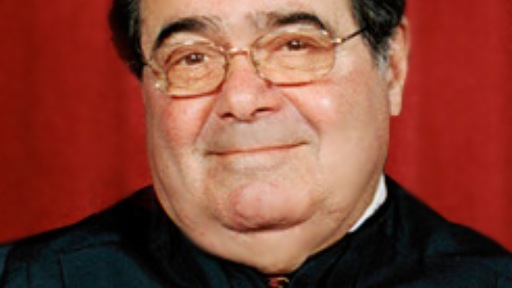 From the archives. First published February 4, 2014.

Justice Antonin Scalia predicts that the Supreme Court will eventually authorize another a wartime abuse of civil rights such as the internment camps for Japanese-Americans during World War II.

“You are kidding yourself if you think the same thing will not happen again,” Scalia told the University of Hawaii law school while discussing Korematsu v. United States, the ruling in which the court gave its imprimatur to the internment camps.

The local Associated Press report quotes Scalia as using a Latin phrase that means “in times of war, the laws fall silent,” to explain why the court erred in that decision and will do so again.

“That’s what was going on — the panic about the war and the invasion of the Pacific and whatnot,” Scalia said. “That’s what happens. It was wrong, but I would not be surprised to see it happen again, in time of war. It’s no justification but it is the reality.”

The discussion of “FEMA Camps” has long been attributed to the over-active minds of conspiracy theorists, but when a Supreme Court Justice speaks on the issue, it would behoove people to listen.

Whether you personally believe in FEMA Camps or not, the evidence is abundant that plans have been in place for decades to deal with another “internment camp” situation.

Have you ever heard of REX-84?

Rex 84, short for Readiness Exercise 1984, was a secretive “scenario and drill” developed by the United States federal government to suspend the United States Constitution, declare martial law, place military commanders in charge of state and local governments, and detain large numbers of American citizens who are deemed to be “national security threats”, in the event that the President declares a “State of National Emergency”. The plan states events causing such a declaration would be widespread U.S. opposition to a U.S. military invasion abroad, such as if the United States were to directly invade Central America.[1][2][3][4][5] To combat what the government perceived as “subversive activities”, the plan also authorized the military to direct ordered movements of civilian populations at state and regional levels.[6]

Rex 84 was written by Lieutenant Colonel Oliver North, who was both National Security Council White House Aide, and NSC liaison to the Federal Emergency Management Agency (FEMA), and John Brinkerhoff, the deputy director of “national preparedness” programs for the FEMA. They patterned the plan on a 1970 report written by FEMA chief Louis Giuffrida, at the Army War College, which proposed the detention of up to 21 million “American Negroes”, if there were a black militant uprising in the United States.[1][7]Existence of a master military contingency plan (of which REX-84 was a part), “Garden Plot” and a similar earlier exercise, “Lantern Spike”, were originally revealed by journalist Ron Ridenhour, who summarized his findings in an article in CounterSpy.[8]

REX-84 is not some conspiracy theory. It is now a part of American history. It is proof that our federal government was discussing contingencies for “FEMA Camps” long before most conspiracy theorists knew what a FEMA camp was.

I am a firm believer that when high-profile political figures speak that we should listen and learn to read between the lines. For Antonin Scalia to make these statements is a bit risky on his part. He knows the statements will be viewed as controversial and yet he probably does not feel at liberty to reveal as much as he would like. Why? Because revealing too much could jeopardize his career or even his very life.

When Dan Bongino (a former Obama Secret Service Agent) says something like, “It’s worse than people know… and I’m not trying to scare you either”, I believe that people should listen. Obviously that is a clue that something is amiss and he is not at liberty to give details.

Americans need to wake up. Things are not right and Scalia is trying to warn us, in my opinion. Let us not forget the DHS whistleblower, Julia Davis, who was bold enough to tell us last year that the war on terror was not as it is perceived to be, and that the real target is American citizens:

“It makes me think that he so-called ‘War on Terror’ is more of a charade and that the priority of the agency seems to be to target concerned citizens and whistleblowers because in my case… they sent an airplane to follow me… they had eight agents at a time following me… they used airplanes, vehicles, helicopters… they used OnStar to listen to what was being said in our cars.”

The next time we see the “reality” of internment camps it may not be Japanese-Americans or any other ethnicity who is targeted. Just as with the IRS scandal, it could very well be dependent on one’s own political ideology.

All we can do is be prepared as possible.

We ran an article a short time ago about FEMA Camps and the recent orders to equip 1000 tent hospitals in the USA. After running that article I read a comment from a woman who said that she wouldn’t need a FEMA Camp. She would be fine on her own.

I think some people are still missing the point if they think they will be given a choice in the matter.