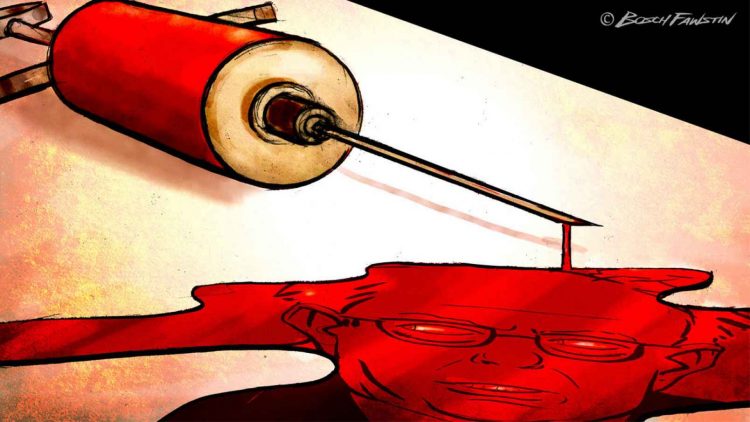 On Tuesday night, Senator Bernie Sanders, the socialist candidate who has run on a plan to nationalize medicine and ban health insurance, began to feel ill while doing an event at a Pakistani Halal restaurant.

Sanders requested a chair in the middle of answering a question. He appeared even more confused than usual and stumbled through his response. The event at the Halal restaurant was cut short and the millionaire campaigner against wealth was rushed to the hospital and admitted that very night.

The Sanders campaign failed to state and the media failed to report the name of the hospital. Why keep the name of the hospital secret? Sanders is most closely associated with a plan to take away everyone else’s access to the kind of health care he just benefited from. Releasing details about his level of care could prove as embarrassing as the socialist millionaire’s recent ascension to the ranks of the 1%.

What we do know is that Bernie Sanders was admitted Tuesday night and by the next day, he had two stents put in to deal with a blockage in an artery. He tweeted, “I’m feeling good. I’m fortunate to have good health care and great doctors and nurses helping me to recover.” And added, “Medicare for All!”

Despite the name, Medicare for All has nothing to do with Medicare. It’s a socialist proposal that would actually eliminate Medicare and reduce everyone to a sub-Medicaid system with limited care options. It draws its inspiration from the British NHS, Canada’s socialized medicine and some European systems.

While Bernie’s timetable of getting an angioplasty within a day might not sound that impressive to Americans, in the British NHS system, the median time from assessment to treatment is 55.3 days. Mean times for treatment have been cited as being 80 days. The maximum NHS waiting time is supposed to be 18 weeks and almost 16% of patients in the UK have to wait more than 3 months for an angioplasty.

Canada’s socialist system has angioplasty waiting times of around 11 weeks. And that’s after you get an appointment to see a specialist. The usual approach is to hand patients some aspirin and to praise Canada’s enlightened socialist system for not “rushing” patients into the hospital like the Americans.

You can go to the ER, but waiting times in Canadian ERs are worse than most other countries.

Senator Bernie Sanders has cited Norway as an inspiration for his socialist policies. 13.4% of Norwegians wait three or more months for the procedure that Bernie got just by walking into an “undisclosed” hospital in the United States.

Bernie waited a day in Vegas to get his angioplasty. In Norway, he would have waited 39 days.

In New York, the average wait time is a day.

Sweden has improved from its infamous wait times of over a year during the eighties when 10% of cardiac patients on the waiting list were dying while online to get access to its “Medicare-for-All”.

Socialists also love to tout the virtues of Cuban medicine. Good luck getting an angioplasty in Cuba.

“I think that countries like Denmark and Sweden do very well,” Senator Bernie Sanders claimed.

But, bafflingly, he chose to get an angioplasty in Vegas in a day instead of waiting around for 42 days in Sweden. Bernie Sanders wants Americans to live under socialism. As long as he has other options.

Sanders wants to benefit from a system in which he can get two stents put in one day, but he wants you to live under his Medicare-for-All socialist plan which would force you to wait weeks and months.

And if you die then, just as in Sweden or the VA, that’s one less cardiac procedure on the waiting list.

Senator Sanders had come to Vegas to appear at a Medicare-for-All town hall. He wasn’t able to make it because he was too busy benefiting from the free market medical system that he wants to destroy.

Ironically, if his socialized medicine system existed, he would have plenty of time to appear at his Medicare-for-All town hall while gasping for breath and popping aspirin. He would have had weeks, perhaps months, of waiting for his angioplasty while promoting Medicare-for-All.

Sanders is only able to continue campaigning for socialized medicine because he isn’t living under it.

But Bernie’s leftist speechwriter, David Sirota, insisted that Bernie’s health scare was “a perfect example of why the United States needs to join the rest of the world and pass Bernie’s Medicare for All legislation.”

It’s a pity that Bernie didn’t join “the rest of the world” and wait weeks to get his angioplasty.

Instead of going into an “undisclosed” hospital and getting his procedure done in a day, Bernie could have shown his supporters how socialized medicine really works and the sacrifices they’ll make.

But a camera crew following Bernie for weeks while he gasped for breath waiting to finally be seen would have killed any remaining support for the socialist plan to destroy health care in this country.

And if Bernie Sanders does, somehow, become the nominee and win the election, a set of events as unlikely as the NHS delivering faster and better care than Bernie’s “undisclosed” hospital, then he won’t be waiting 42 days or 18 weeks for an angioplasty. Instead, he’ll be going to “undisclosed” hospitals.

Socialist leaders don’t live by the same rules they make for everyone else.

“Nobody should earn more than a million dollars,” Bernie Sanders claimed when he ran for Senate. He argued that millionaires in the Senate were “immoral”. These days he’s a millionaire. And that’s okay.

“You don’t necessarily need a choice of 23 underarm spray deodorants or of 18 different pairs of sneakers when children are hungry in this country,” he once argued.

But Bernie Sanders and his crooked clan need to have three homes. Even when children are hungry.

You don’t need a choice of deodorants. But Bernie needs a choice of lamb loin, ganache and crab salad.

There’s no mention of him sharing the fine cheeses or the lobster sliders with the hungry children of America whom he once saw on TV in a Sally Struthers commercial in between episodes of Matlock.

If Bernie gets his way, he won’t wait 42 days for an angioplasty. You will.

Bernie, just like Prince Harry, Al Gore and Leonardo DiCaprio, will have his jets and his white wines and his medical procedures. And he will have them the moment he decides he needs them.

You will get nothing. Not unless you have the right political connections.

If Bernie Sanders were some random 78-year-old man, Medicare-for-All might have killed him. But if Bernie gets to run the country, then Medicare-for-All won’t kill him. He’ll never even experience it.

Medicare-for-All will kill you.