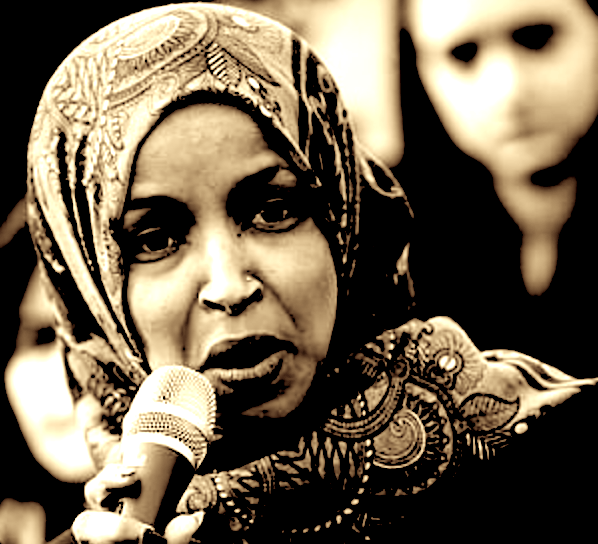 Which side is the celebrated and ever-winsome Rep. Ilhan Omar (D-Mogadishu) really on? She showed us again Wednesday evening.

Senator Marco Rubio (R-Florida) tweeted a video of the radical Leftist Georgia Senate candidate Raphael Warnock with the comment: “Not shocked #Georgia Democrat Senate candidate Raphael Warnock said ‘You cannot serve God and the military’ at the same time. These & even crazier things is what the radicals who control the Democratic party’s activist & small dollar donor base believe.”

Omar immediately rushed to Warnock’s defense, tweeting: “Mathews [sic] 6:24 ‘No one can serve two masters, for either he will hate the one and love the other, or he will be devoted to the one and despise the other. You cannot serve God and dmoney [sic].’ The lies and smears of the GOP have no boundaries, but this is a disgrace and shameful.” It was yet another telling indication of where the notorious Omar’s loyalties lie, and what she thinks of the United States.

The Muslim Biblical scholar was correct that in the Gospel of Matthew (not “Mathews,” as she called it), Jesus says “You cannot serve both God and money.” However, Warnock’s extrapolation of this into a prohibition on Christians serving in the U.S. military is tendentious at best and leads inevitably to questions about the motives of someone who would suggest such a thing. While there was a controversy in the early days of Christianity about whether a Christian could serve in the military of the Roman Empire, it was settled centuries ago, and no Christian sect with the exception of the small groups that are strictly pacifist has ever said that it was un-Christian to serve in the U.S. military. This is yet another indication of where Ilhan Omar’s sentiments truly lie, for were her words heeded and Christians streamed out of the military of this country, our armed forces and the country as a whole would be drastically weakened.

We saw this also back in July when the Left’s brightest and arguably most malevolent (although there is a great deal of competition for that distinction) young star said that her colleagues’ pet treasonous cause of defunding the police would not be enough: “We can’t stop at criminal justice reform or policing reform for that matter. We are not merely fighting to tear down the systems of oppression in the criminal justice system, we are fighting to tear down systems of oppression that exist in housing, in education, in health care, in employment, in the air we breathe.”

Those “systems of oppression” that need to be torn down, in her sage view, include “our economy and political system.” Omar continued: “We must recognize that these systems of oppression are linked. As long as our economy and political system prioritize profit without considering who is profiting, who is being shut out, we will perpetuate this inequality. So we cannot stop at criminal justice, we must begin the work of dismantling the whole system of oppression wherever we find it.”

The “whole system of oppression.” All right. But that is not exactly what Rep. Omar promised to be about when she became an officer of the United States government. Here is the oath Ilhan Omar took when she became a member of the U.S. House of Representatives: “I, Ilhan Omar, do solemnly swear (or affirm) that I will support and defend the Constitution of the United States against all enemies, foreign and domestic; that I will bear true faith and allegiance to the same; that I take this obligation freely, without any mental reservation or purpose of evasion, and that I will well and faithfully discharge the duties of the office on which I am about to enter. So help me God.”

The people who wrote that oath assumed that the God in question would be the same one who inspired the passage Omar refers to as “Mathews 6:24.” But even aside from Omar’s Islamic faith, it’s quite clear that she had a very different god in mind, the angry and unappeasable god of revolution. Calling for the “dismantling” of the “political system” is the direct opposite of supporting and defending the Constitution of the United States against all enemies, foreign and domestic. In a sane Congress, she would be expelled. The Constitution says: “Each House may determine the Rules of its Proceedings, punish its Members for disorderly Behaviour, and, with the Concurrence of two thirds, expel a Member.” (Art. I section 5)

When a sitting congresswoman advocates for the dismantling of the entire political system, it ought to have been easy to get two-thirds of the House of Representatives to vote to expel her. But of course, that would require a sane House. Omar was not and of course, will not be removed from Congress; nor was she or will she be censured or even rebuked. The House’s Democratic leadership already showed in 2019, when it failed to rebuke her for her open and repeated expressions of anti-Semitism, that it lacked the will to take any action on Omar that might alienate the lunatic Left that makes up so much of its constituency today.

And now she has claimed that Christians serving in the U.S. military are contradicting Christian scripture, a view that, if widely believed, would cause the collapse of the military and destruction of the nation. Is that what Ilhan Omar wants?