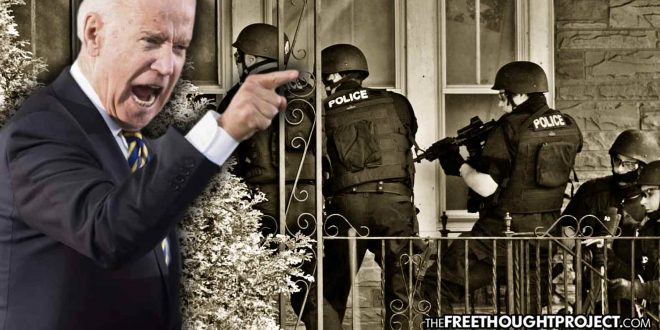 Last month, the Free Thought Project reported on HR 127, the most tyrannical gun bill ever proposed. The bill would target the poor by forcing citizens to pay $800 per year to possess firearms that they are required to register. It also bans multiple legal guns and ammo types, turning tens of millions of Americans into felons over night. While this bill is, without a doubt, the worst gun bill in history, it didn’t lay out any guidelines for violating a citizen’s Fourth Amendment right. That was February, now we are in March and the Biden administration is encouraging the Supreme Court to rule that can cops enter a home to seize guns without a warrant and pushing a ban on millions of legal guns.

On Tuesday, after the tragic shooting in Boulder, Colo., Biden called for banning “assault weapons.”

“I don’t need to wait another minute, let alone an hour, to take common sense steps that will save lives in the future and to urge my colleagues in the House and Senate to act,” Biden said in remarks at the White House following Monday’s shooting. “We can ban assault weapons and high-capacity magazines in this country once again. I got that done when I was a senator. … We should do it again.”

Then, on Wednesday, the US Court for 9th Circuit waged a massive attack against your right to self defense, concluding the 2nd Amendment does not guarantee right to carry firearms outside the home.

“There is no right to carry arms openly in public; nor is any such right within the scope of the Second Amendment,” U.S. Circuit Judge Jay Bybee, a George W. Bush appointee, wrote for the majority of an 11-judge panel in a 127-page opinion.

According to Forbes, the Biden Administration and attorneys general from nine states are now urging the Supreme Court to uphold warrantless gun confiscation — and it could actually happen.

This week, the Supreme Court began hearing the case of Caniglia v. Strom, which asks the question of whether the “community caretaking” exception to the Fourth Amendment’s warrant requirement extends to the home.

The community caretaker exception, has already been recognized as an exception to the Fourth Amendment by the United States Supreme Court. In Cady v. Dombrowski, 413 U.S. 433 (1973), the United States Supreme Court held that police officers did not violate the Fourth Amendment when they searched the trunk of a car that had been towed after an accident.

The Court acknowledged that, “except in certain carefully defined classes of cases,” police cannot search private property without consent or a warrant. It emphasized, however, that “there is a constitutional difference between houses and cars.” Since Cady, there has been a whole host of cases that took this holding and created the doctrine of “community caretaking.” Cady defined community caretaking activities as those “totally divorced from the detection, investigation, or acquisition of evidence relating to the violation of a criminal statute.”

In other words, as long as an officer might reasonably think that a warrantless search will alleviate a danger to the community, the search is considered constitutional. This was in vehicles, not homes.

While the caretaker exception has long been applied to vehicles, the idea of applying it to homes and allowing cops to seize guns without a warrant is worrisome. In an article from Forbes, the case of Caniglia v. Strom, is explained

Mr. Caniglia was arguing with his wife and melodramatically put an unloaded gun on the table and said “shoot me now and get it over with.” His wife called a non-emergency number for the police who arrived shortly thereafter. The police disagreed about whether Mr. Caniglia was acting “normal” or “agitated” but they convinced him to take an ambulance to the local hospital for evaluation. The police did not accompany him.

While he was on his way to the hospital, Mrs. Caniglia told the police that her husband kept two handguns in the home. The police decided to search his home for the guns without obtaining a warrant. (Mrs. Caniglia’s consent to have the police search their home was legally negated because the police untruthfully told her that her husband had consented to the seizure of any guns.) The police located and seized the two guns. Mr. Caniglia sued for the violation of his 4th Amendment right to privacy and his 2nd Amendment right to keep handguns in the home for self-protection

The case has been making its way through the courts, with the courts ruling in favor of warrantless searches. The federal court just below the Supreme Court, the 1st Circuit Court of Appeals ruled that it is fine and dandy for cops to warrantlessly search your home and take your guns because they need “elbow room” to provide safety.

“At its core, the community caretaking doctrine is designed to give police elbow room to take appropriate action when unforeseen circumstances present some transient hazard that requires immediate attention. Understanding the core purpose of the doctrine leads inexorably to the conclusion that it should not be limited to the motor vehicle context. Threats to individual and community safety are not confined to the highways,” the court wrote.

As Forbes points out, unlike the “exigent circumstances” and “emergency aid” exceptions, the community caretaking exception is not limited to circumstances where there is no time to apply for a warrant. And the question of what sort of caretaking falls under this exception is extremely vague. Will the police be able to use it to, for example, conduct warrantless searches of political protesters’ homes to make sure they aren’t planning on violent behavior at their next political rally?

We have already seen tech giants like Facebook hand over the private messages of those who talked about the events of January 6. If this ruling is upheld, it could pave the way for cops to raid the home of those who engage in peaceful discourse based solely on the premise that violence might happen.

President Biden has already labeled tens of millions of Americans who supported the pro-Trump rally in DC as “terrorists.”

Just a few weeks later and a DHS terror alert was issued for beliefs held by tens of millions of Americans like those who oppose lockdowns or who were upset over the outcome of the election. With the slippery slope of this case, these views could easily be included in the “elbow room” granted to police to carry out their “community caretaking” and subsequently raid homes and seize guns with no warrant

Hopefully SCOTUS knocks down this ruling and cooler heads prevail. However, at the rate this tyranny is unfolding in 2021, that is not very likely.

“The Fourth Amendment protects our right to be secure in our property, which means the right to be free from fear that the police will enter your house without warning or authorization,” said Institute for Justice Attorney Joshua Windham. “A rule that allows police to burst into your home without a warrant whenever they feel they are acting as ‘community caretakers’ is a threat to everyone’s security.”