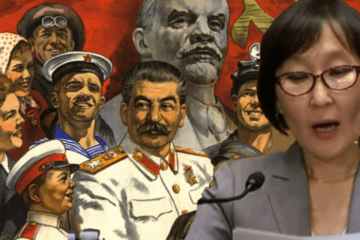 Saule Omarova, Biden’s radical currency comptroller nominee, who had praised the Soviet Union, lied during the hearing into her nomination about her membership in the Komsomol. Komsomol stands for “Kommunisticheskiy Soyuz Molodezhi” or the Communist Union of Youth. It was meant to serve as a counterpart to the Communist Party. As its name indicates it was a core Communist organization.

Sen. John Kennedy (R-La.) asked about her membership in a communist organization while she was growing up in the Soviet Union.

“It’s commonly referred to as the ‘young communists,’” he said to Omarova. “Were you a member?”

“Senator, I was born and grew up in the Soviet Union,” she said. “Everybody in that country was a member of the Komsomol, which was the communist youth organization.”

That is not true.

While Komsomol membership was expected, especially if you wanted any kind of career, it was not compulsory. “Everyone” was not a member.

Membership was widespread, but principled people, including my mother, opted out by finding excuses and playing delaying games. There might be some pressure, but ultimately joining it was a choice.

A choice that Omarova made, the same way she made the choice to continue praising the Soviet Union’s economic policies.

Much like joining the Nazi Party, joining the Communist Komsomol was something you did to wield power and get ahead.

Vladimir Lenin visited the 3rd Congress of the RKSM in October 1920 and said an inspirational speech – “the main goal is to study communism, but only linking every step of education and training with the continuous struggle of the proletarians and working people against the old exploitative society.” By then, there were about half a million members in the Komsomol. But what really drove people to join the organization?

Historian Vladimir Ippolitov from Tambov wrote that since the beginning of 1930s, the Komsomol of Tambov Region was used for implementing collectivization – stripping the well-to-do peasants of their savings and food, with demonstrative cruelty. “Local Party and Soviets administration made the young people do the hardest and dirty work,” Ippolitov writes. “The expropriation of the peasants’ possessions, that were to become property of kolkhozes, turned out to be pure robbery. Feeling the support of the authorities, Komsomol members behaved like they owned the villages. In Orlovsky district, a secretary of a Komsomol cell named Semenov beat a woman, saying ‘I’m a Komsomol member! Fear and obey me!’”

So young guys went to Komsomol to get a gun? Not exactly, rather to build a career within the Soviet State. Komsomol, that was often referred to as “the helper and the reserve of the Communist Party,” had a huge bureaucratic structure resembling the one of the Communist Party of the Soviet Union and the better one did in this structure, the higher the chances of joining the CPSU without hindrances was.