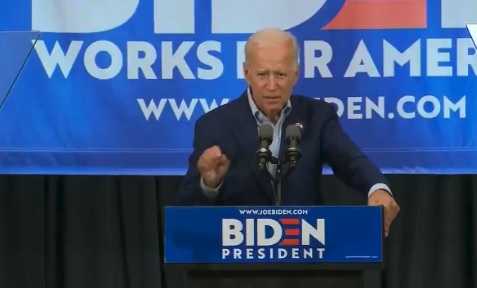 Former Vice President Joe Biden just pulled an Obama in claiming, “For eight years, there wasn’t one single hint of a scandal or a lie.” No, seriously he did.

Biden made the ridiculous claim on the campaign trail on Wednesday evening in an Iowa campaign speech.

“Know what I was most proud of?” he said, in reference to the occupying of the White House by the usurper, Barack Hussein Obama Soetoro Sobarkah.

“For eight years, there wasn’t one single hint of a scandal or a lie,” he told the crowd.

Joe Biden: "Know what I was most proud of? For eight years, there wasn't one single hint of a scandal or a lie." pic.twitter.com/Yb8Mm8DdIC

Of course, Biden has told this whopper before.

“The thing I’m proudest of is we, coincidentally, we were each in a different part of the country and we were each talking to groups of people that were being televised,” Biden said in reference to Obama on ABC’s The View in April. “On the same day, purely coincidentally, we were asked what are you proudest of from your administration? You know what I said—he said the same thing, though probably a bit more clearly than I did: Not one single whisper of scandal.

He’s not the only one though.

Obama has also made such a ridiculous claim.

We’ve documented over 1,300 scandals, lies, crimes and cronyism by the Obama administration.

On top of that, does anyone remember these scandals in which even an impotent bunch of Republicans never got to the bottom concerning them nor did they bring justice?