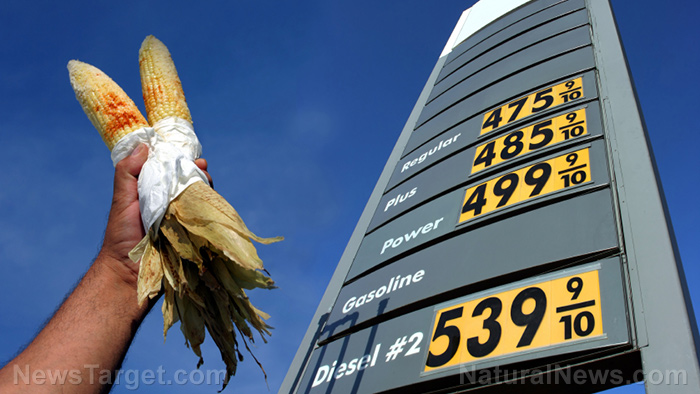 (Natural News) Instead of using abundant and easily obtained fossil fuels straight from the ground, the Biden regime’s Environmental Protection Agency (EPA) just mandated the highest level yet of corn-based ethanol to be mixed into the nation’s fuel supply.

Despite the fact that growing corn for ethanol is highly destructive to the environment (i.e., chemical pesticides and herbicides, excessive land use, genetic engineering, etc.), Biden and his cronies want more of it grown than ever before so it can be dumped into your gas tank, destroying your car’s engine.

In 2022 alone, refiners will need to blend 20.77 billion gallons of ethanol, biodiesel and other “renewable” fuels into the gasoline supply. This, claims the Resident-in-Chief, will help to stop inflation somehow.

“Additionally, the oil industry must blend 250 million more gallons of renewable fuel, both this year and next, after a federal court found the Obama administration inappropriately reduced the 2016 blending requirements,” reports indicate.

“The agency also denied roughly 70 exemptions for small refineries, many of which had been granted under former President Donald Trump.”

Corn prices are already sky-high; how will this mandate help reduce inflation, exactly?

This is horrible news for people who drive gas-powered vehicles, as ethanol is widely known to destroy car engines. Car manufacturers even include small-print warnings explaining that the use of ethanol-laced fuel voids the warranties.

It is great news for corn farmers who are subsidized by the federal government, on the other hand. In a statement, Monte Shaw, head of the Iowa Renewable Fuel Association, praised the Biden regime for the ruling.

“The Biden EPA is to be commended for restoring sanity to the refinery exemption program,” Shaw said. “These exemptions have never been justified and were simply being used to illegally undermine the RFS. We are grateful this long nightmare is over.”

Chet Thompson, CEO of the American Fuel & Petrochemical Manufacturers group, offered a contrary take that says the new requirement runs “contrary to the administration’s claims to be doing everything in their power to provide relief to consumers.”

“Unachievable mandates will needlessly raise fuel production costs and further threaten the viability of U.S. small refineries, both at the expense of consumers,” he added.

The Wall Street Journal ran a piece explaining that the prices for both ethanol and corn have risen sharply this year, which makes the mandate nonsensical if the goal is really to reduce inflation.

Analysts at the research and consulting firm Rapidan Energy Group LLC explained that cutting the 2022 mandate rather than increasing it could have lowered refiners’ business costs while leading to lower prices at the pump. That reduction, however, would have only been a few cents per gallon.

“Meanwhile, the EPA looks the other way as our ocean dead zones grow, water pollution worsens, and endangered species suffer.”

Growing corn for ethanol production is said to have increased corn prices by 30 percent and other crop prices by 20 percent, according to a report published earlier this year by the National Academy of Sciences.

Currently, the maximum amount of ethanol allowed for blending into standard gasoline is 10 percent. Biden, however, announced in Iowa the other day that his regime has produced an environmental waiver to up that amount to a 15 percent (E15) blend.

More related news about the Biden regime can be found at BigGovernment.news.