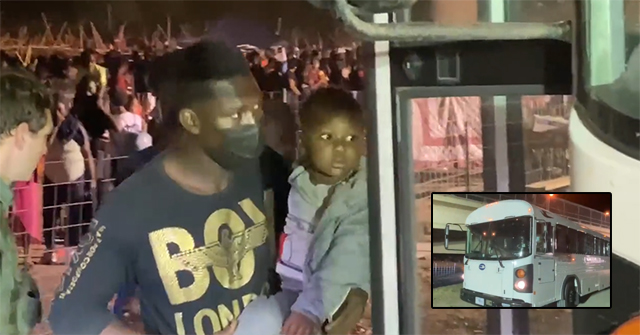 The Biden regime is reportedly processing thousands of illegal alien Haitian “family units” under the Del Rio International Bridge and releasing them into the US with a simple notice to appear.

NTAs are blown off the vast majority of the time, with zero repercussions.

Title 42 expulsions of “family units” was blocked by an activist federal judge just last week but the ruling doesn’t go into effect for two weeks.

Nonetheless, the Biden regime is just processing these “family units” anyways and sending them throughout the US to punish us.

Todd Bensman with the Center for Immigration Studies has more:

From CIS, “Why the Huge Illegal Alien Camp Formed in Del Rio”:

…[O]n Sunday, September 12, the Mexican government effectively sent a mass of migrants it had bottled up for months in its southern states up to the American border. This move, which appears to have been done under the cover of Mexico’s independence week of celebration known as El Grito, essentially foisted a humanitarian problem onto the Americans in a single week.

A quick background is necessary to understand what the migrants were saying. In short, when it was newly installed in January, the Biden administration began to pressure Mexico to maintain and use its National Guard and immigration bureaucracy to slow the flow of expected caravans and of tens of thousands of Haitians and other migrants coming in from all over the world. This was a fairly quiet diplomatic campaign, and it coincided with billions in promised U.S. aid and other benefits such as covid vaccines. It was a different approach from the Trump style of threatening to damage the Mexican economy with tariffs unless the leadership slowed U.S.-bound illegal immigration coming through Guatemala.

In response to Biden’s softer approach with gifts, Mexico apparently responded with a lighter version of a Trump-era tactic, which was to require that migrants entering from Guatemala be held in the southern state of Chiapas, in the border city of Tapachula, until they applied for and obtained temporary legal permits. National Guard roadblocks reinforced the policy.

As CIS reported in March from Mexico, many thousands of immigrants willing to invest in bribes and smuggling fees obviously find ways around the National Guard. But many thousands of others chose not to invest in these expensive end-runs and stayed in Tapachula for months hoping for cheaper Mexican papers solution.

Probably by design, the documents were slow to come, taking three, four or five months. A sea of migrants built up behind this bureaucratic dam, tens of thousands of them.

[…] At the Texas camp, as CIS has reported, Border Patrol agents issue numbered carnival-type tickets, taking a place in a line expected to last for weeks.

Many are now boarding yet more buses inside the camp, these ones provided by DHS to take them to Border Patrol processing stations. Some may be deported. But most likely will spend a day or two until they get temporary resident permits and a date to appear at an American immigration office in the city of their choice. Then under current Biden policies for families and unaccompanied minors, a great many will be released to travel anywhere in America, boarding yet more buses to those cities and towns.

From CIS, “Did Uncle Sam Literally Pave the Way for the Illegal Aliens at Del Rio?:

You have all seen those pictures of large numbers of illegal aliens wading across the river at Del Rio, Texas.

My question is: How much did our government pay, at some point in history, for the dam’s apron on which the aliens are crossing? And, more importantly, why is there not a fence in the middle of the river?

The photos I have seen in the Washington Post show people wading across the river in water a little higher than their knees. There are several of these aliens, walking side by side, indicating a 10- to 20-foot apron behind the dam, probably made of cement.

Now, no one builds dams across an international river without some governmental money and the cooperation of both nations, so at some point in the past the federal government spent some millions for the dam, which may have been built for flood control, and/or power generation purposes. The walking patterns of the illegal aliens suggest that there is a wide apron behind the dam, a structural element designed to strengthen it.

No one has a right to walk across the dam from one nation to the other; there are ports of entry for that purpose. Yet the de facto walkway was apparently built without a flood gate in the middle of the river, which would have been a barrier.

Further, in the years since the dam was built, no fence has been added. Such a fence would be parallel to the flow of water, so it would not create problems with flooding.

Why, during the Trump years of spending billions on walls, was not a $100,000 or so of fence built to block such an obvious walkway? Why hasn’t one been there for decades?

Earlier this year, it was projected that 2 million illegal aliens will invade the United States in 2021 alone.

That’s more than the population of Alaska, Vermont and Wyoming combined!

“Almost 1.5 million aliens have been apprehended by the Border Patrol at the Southwest border thus far in FY 2021, more than in any single fiscal year since FY 2000 (1,643,679),” CIS reported last week. “September’s numbers will likely break that record.”

If there’s 14,000 illegal aliens in this one group and an estimated 2 million coming in this year, that means we’re getting 142 groups like this in one year (5480 illegal aliens a day)!