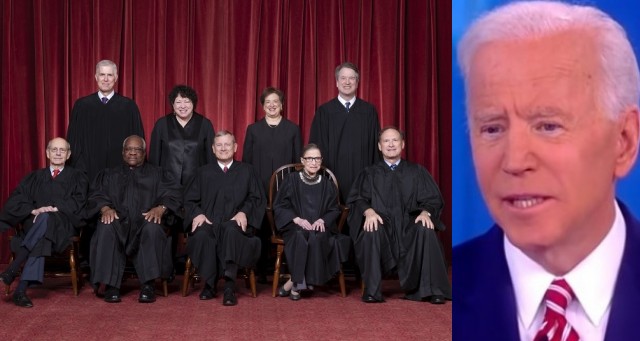 (USA Features News) Former Vice President Joe Biden, the leading Democratic presidential contender for 2020, pledged on Tuesday that he would not be “satisfied” until at least half of the U.S. Supreme Court was comprised of women.

Furthermore, Biden said he would nominate justice candidates who believe that the U.S. Constitution is a ‘living, breathing document’ that is subject to changing interpretations over time.

Biden said on the campaign trail that “academia” agrees with him: Supreme Court justices Elena Kagan and Ruth Bader Ginsburg have a philosophically correct view of the high court.

Kagan was never a federal or state judge before her appointment by President Obama, but rather an academic who taught law at Harvard University. She was nominated to the D.C. Circuit Court of Appeals but it expired after the Senate took no action.

“I for 22 years, I think it was, taught constitutional laws, the separation of powers. What I presided over as the chairman of the Judiciary Committee — they tell me more Supreme Court nomination judges than anybody in history just because I’ve been around so long,” Biden said to a group of voters in Washington, Iowa.

“The people that I would appoint to the Court, are people who have a view of the Constitution as a living document, not as a state document,” he continued.

“I argued and continued to argue, and the bulk of academia agrees with this now, is that if in fact there is a right to privacy in the Constitution — it’s not mentioned, it’s the Ninth Amendment, there are a number of rights in the Constitution — it’s also there are a number of other rights that exist that relate to how you view whether or not all the amendments taken together in the the constitutional body actually protects people in their privacy,” Biden added.

“And so they’re the kind of judge — I would look to judges, potential nominees, they would have to acknowledge the fact that there are unenumerated rights that are nonetheless constitutional rights; they’re not mentioned by name in the Constitution.”

“And, by the way, I’ve said years ago that I’ll be satisfied when at least half the court represents the country and are women,” he added during a visit to Washington High School.

Joe Biden speaks in Washington, Iowa: "The people that I would appoint to the Court, are people who have a view of the Constitution as a living document." pic.twitter.com/DazbAQiIzS

The Ninth Amendment says, “The enumeration in the Constitution, of certain rights, shall not be construed to deny or disparage others retained by the people.” According to the Cornell Law School, “was James Madison’s attempt to ensure that the Bill of Rights was not seen as granting to the people of the United States only the specific rights it addressed.

“In recent years, some have interpreted it as affirming the existence of such ‘unenumerated’ rights outside those expressly protected by the Bill of Rights,” the university notes.

As to the right to privacy, it is specifically protected under the Fourth Amendment.

“The ultimate goal of this provision is to protect people’s right to privacy and freedom from unreasonable intrusions by the government,” Cornell Law School noted.

By comparison, President Trump has been appointing federal judges and Supreme Court justices who take an “originalist” view of the Constitution — that is, they rely on the explanations provided by the founders in applying the Constitution to laws and administration regulations and policies.