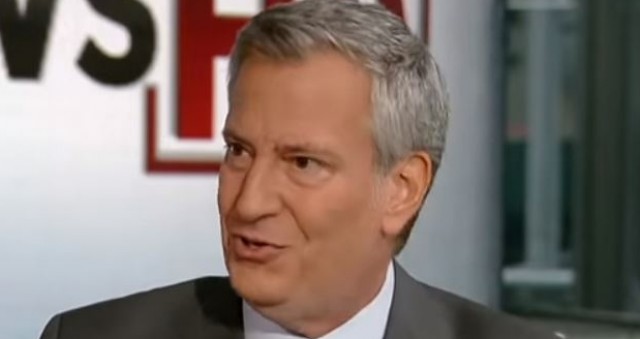 New York City’s liberal mayor appeared on Fox News with Ed Henry where he basically insinuated that hate coming from Trump and his administration is responsible for the anti-Semitic attacks throughout the country.

That is absolutely absurd.

The mayor told host Ed Henry on “America’s News HQ” that hate is “having an effect on all of us,” The Daily Caller News Foundation reported.

“I also want us to be clear what’s happening here,” de Blasio said Sunday. “An atmosphere of hate has been developing in this country over the last few years. A lot of it is emanating from Washington, and it’s having an effect on all of us.”

Henry questioned de Blasio as to whether the New York mayor was blaming President Donald Trump for the attacks, to which de Blasio responded, “Not just the president — I’m saying, but we have to be clear. We need a different tone starting in Washington.”

“We had, by the way, with Democrats and Republicans, both in the White House, that encouraged this country to actually find some unity and some common ground,” de Blasio added. “We haven’t had that for the last few years.”

Certainly not during the Obama years- he tore this country apart. Freaking idiot.

The anti-Semitic attack in Monsey, New York, on the 7th night of Hanukkah last night is horrific. We must all come together to fight, confront, and eradicate the evil scourge of anti-Semitism. Melania and I wish the victims a quick and full recovery.

Henry also grilled the failed mayor about the homeless crisis in New York and California and his other massive failures in life.

This dude is a loser and a conman in my humble opinion. Corrupt garbage.

Trump has done more for this country than you could even imagine.