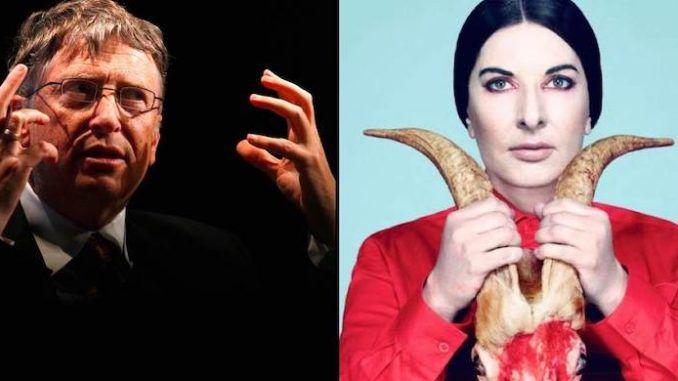 Recall those DNC emails that were leaked and the first time the American public was introduced to “spirit cooking” Marina Abramovic? Well now, she is front and center of Bill Gates-founded Microsoft’s new virtual reality ad. Does anyone really think this is a coincidence considering he is attempting to push for mandatory vaccines worldwide?

Did I mention the ad was run on Good Friday?

The story comes from RT:
A tone-deaf Microsoft ad featuring performance artist Marina Abramovic has been memory-holed after it was pilloried online. Was it her ‘spirit cooking’ notoriety from the Podesta emails or are people just sick of wealth-flaunting?

An ad featuring the Serbian performer’s latest project, a “mixed reality” installation incorporating Microsoft’s HoloLens virtual-reality platform, clearly touched a nerve before it was removed earlier this week. The video received over 25,000 “thumbs down” on YouTube before it was yanked and, while comments were turned off, it’s safe to say the reception was a frosty one.

The ad itself was relatively clean of Abramovic’s usual blood-and-sacrifice tropes, but its overtones of art-as-luxury-good and conspicuous consumption – the “mixed reality experience” was to be auctioned off at Christie’s later in the year – came off as equally outrageous at a time when most of the world is facing an unprecedented economic depression and millions have found themselves out of work due to the coronavirus pandemic.

Abramovic is probably the most famous performance artist alive today, but she’s also the most notorious – in no small part because of WikiLeaks’ 2016 release of emails pilfered from John Podesta, Hillary Clinton’s then-campaign director. The emails appeared to open a window onto what the rich and famous get up to behind closed doors that was either tantalizing or repulsive, depending on one’s tastes. Immediately following their release, internet sleuths dug up endless footage of Abramovic carving cakes shaped like human bodies, writing on walls with blood, and posing with various satanic-looking objects.

Abramovic insisted at the time that her work wasn’t satanic and the videos were taken out of context. Despite the open references to ‘spirit cooking’ in the emails, she distanced the dinner in question from the blood-and-guts work she’s known for. “It was actually just a normal menu, which I call spirit cooking,” she told the Guardian in 2016, insisting “there was no blood, no anything else. We just call things funny names, that’s all.” Apparently the outlet didn’t ask her about the human-shaped cake or the simulated child sacrifice, or feel the need to press her on how previous ‘spirit cooking’ performances in art galleries were heavy on blood (to say nothing of recipes involving semen and breast milk) and light on food.

While many of the ‘thumbs down’ were no doubt from aficionados of the Podesta emails, Pizzagaters and other conspiracy analysts, 25,000 is an awfully large number to write off as “fringe types.” When one considers that not everyone looking at the video saw the YouTube version, or had an account to register their displeasure, it’s likely the tip of a sizable iceberg.

The art market is one of the few bubbles that hasn’t popped yet – many will remember Maurizio Cattelan’s banana, taped to the wall at Art Basel Miami Beach in December, selling for $120,000 until someone plucked it off the wall and ate it – at which point it was replaced with another, higher-priced banana.

Abramovic’s performance work – transient by definition – is a little more difficult to sell, but Microsoft seemed to have nailed it down with the HoloLens thing. Add in the general bad feeling against Microsoft founder and world’s second-richest-man Bill Gates, who has been ubiquitous throughout the coronavirus epidemic pushing “digital certificates” and 18-month lockdowns as the answer to the virus, despite lacking a medical degree or any expertise in the field beyond the money he’s poured into mass vaccination campaigns, and the backlash becomes understandable.

Hashtags like #BillGatesIsNotYourFriend and #BillGatesPublicEnemyNumber1 have proliferated in recent weeks as many of the same researchers who probed Abramovic’s performance past have dug into Gates’ questionable statements in support of microchipping the world and the myriad apparent conflicts of interest between the companies he invests in and the global health causes he promotes. Given his track record, his stated goal of vaccinating seven billion people has also raised a few eyebrows.

Even if Abramovic’s “satanism” is wholly performative, and Gates really believes in the healing power of universal vaccination (from which he still wants legal indemnification), rubbing in the public’s face the income inequality that has thrived amid the coronavirus epidemic – eight billionaires have hoarded half the world’s wealth, according to Oxfam – will only pour gas on the fire.

Microsoft’s Abramovic ad looks for all the world like a deliberate attempt to set off the very firestorm of outrage it accomplished. The ad may have been pulled, but the mission was accomplished.

This is the very kind of people with which Gates and company associate. If you have any doubts about how evil these people are, Marina Abramovic should put any apprehensions you have to rest.

Fortunately, the ad was pulled, but the claim is it was over Abramovic being a satanist, which is readily clear from her work and the things she is involved in, which is not a conspiracy theory.

Tim Brown is an author and Editor at FreedomOutpost.com, SonsOfLibertyMedia.com, GunsInTheNews.com and TheWashingtonStandard.com. He is husband to his “more precious than rubies” wife, father of 10 “mighty arrows”, jack of all trades, Christian and lover of liberty. He resides in the U.S. occupied Great State of South Carolina. . Follow Tim on Twitter. Also check him out on Gab, Minds, MeWe, Spreely, Mumbl It and Steemit
(Visited 23 times, 1 visits today)
Share
Tweet
Share
Pin