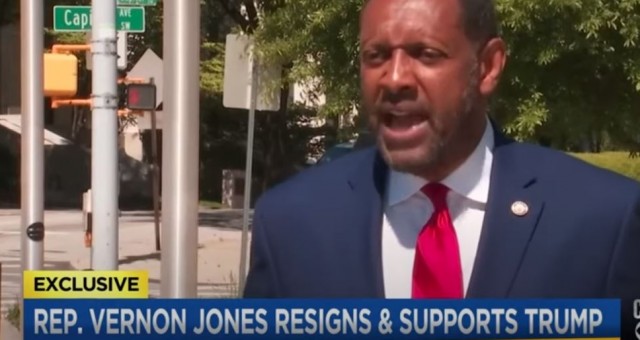 More and more Blacks are jumping on the Trump Train because they are seeing what a great job Trump has done for them and are realizing that the Democrats have treated them like sh*t for decades.

Dems made promises they had no intention of keeping- they just wanted their votes.

Well, times have changed and Trump has an approval rating of right around 35%.

Needless to say- Dems are PANICKING!

So Fox News is reporting that Georgia Democratic state Rep. Vernon Jones who is Black announced Tuesday he is resigning from his seat after last week endorsing President Trump’s reelection — a move that quickly earned him backlash from Georgia Democrats.

I’m a Georgia State Representative and lifelong Democrat. But in this election, I’ll be casting my vote for @realdonaldtrump.

According to the Atlanta Journal-Constitution, Jones told The Rashad Richey Morning Show, a talk show in Atlanta, that despite his resignation he would not be leaving the Democratic Party because “somebody’s got to be in there to hold them accountable — hold them accountable to how they are treating black people [and] root out the bigotry.”

“Turn the lights off, I have left the plantation,” Jones said in a separate statement officially announcing his resignation, according to the Journal-Constitution. “Someone else can occupy that suite. Therefore, I intend not to complete my term effective April 22, 2020.”

Jones tweeted- “I’ve seen more Democrats attack me for my decision to endorse @realDonaldTrump than ask me why. They’ve used and abused folks in my community for far too long, taking our votes for granted. Black Americans are waking up. An uprising is near.”

I’ve seen more Democrats attack me for my decision to endorse @realDonaldTrump than ask me why.

They’ve used and abused folks in my community for far too long, taking our votes for granted.

Black Americans are waking up. An uprising is near.

After announcing his resignation, Jones fired off a handful of combative tweets touting Trump and attacking Democrats.

“I don’t care what the Democrat Party does to me,” Jones said in one tweet, apparently quoting himself on The Rashad Richey Morning Show. “What are they going to do? Spank me?”

.@RepVernonJones to @Rashad1380 : “I don’t care what the Democrat Party does to me. What are they going to do? Spank me?”

He continued: “More African-Americans, prior to this pandemic, were working more than any other time in my lifetime.”

In a final tweet, Jones said that “[t]he left hates me because they can’t control me. They can stay mad.”

The Left hates me because they can’t control me.

They can stay mad.

“I intend to help the Democrat Party get rid of its bigotry against Black people that are independent and conservative,” Jones said in the statement announcing his resignation, according to the Journal-Constitution. “I endorsed the White guy (Donald J. Trump) that let Blacks out of jail, and they endorsed the White guy (Joe Biden) that put Blacks in jail.”

Again, Blacks are seeing the light and jumping on the TRUMP TRAIN! ALL ABOARD!