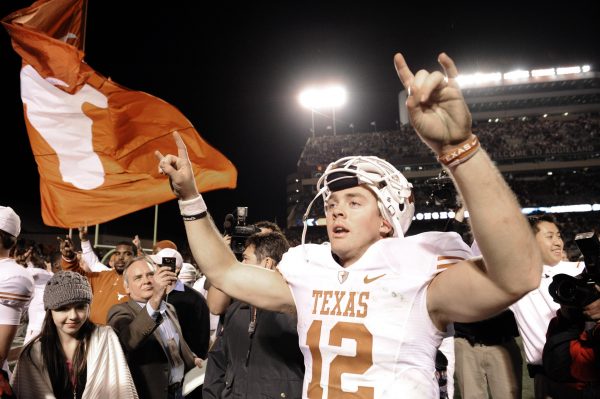 Previously on SPBDL: All Statues to White Men Are Coming Down: Texas A&M Black Quarterback Leading Push to Tear Down “Sully” Statue on Campus Celebrating a Dead White Male

There’s no need to reinvent the wheel. The same script applies to every major university or college in America that, until 50 -60 years ago, enrolled only white students.

Integration of Predominately White Institutions (PWI) was always going to end with the latter assimilating to the former. Despite absolute no supporting evidence to the origins of the University of Florida’s “Gator Bait” chant being racist, the school dropped it with hardly any protest.

Why? We can’t make the black players on the roster – sometimes accounting for almost all of the black males on campus, as the University of Alabama-Birmingham found out when they dropped football but quickly brought it back – upset, or else who would run with the football, pass the football, catch the football, and play defense for our alma mater on fall Saturday’s (if you said white people, don’t you know blacks are better athletes…)?

And now black football players at the University of Texas are pushing to have buildings renamed and the traditional “Eyes of Texas” removed because of racism in the past. Or something like that.

Basically, because the school has a history that was once unapologetically white (like all of American history). [University of Texas athletes want traditional ‘Eyes of Texas’ song replaced due to racist history: UT has previously attempted to address racist policies in its history, KSAT.com, June 15, 2020]:

Here’s why you may have seen posts trending on social media over the weekend about the University of Texas song “Eyes of Texas.”

A group of University of Texas football players and athletes across several sports called on the school Friday to rename several campus buildings, change the traditional school song and donate a percentage of athletic department revenue to organizations supporting the Black Lives Matter movement.

The letter said it was sent on behalf of the Longhorn “student athlete body.” It said the football team will participate in all required team activities ahead of the upcoming season, but players would not aid in recruiting future players or participate in alumni events.

The two-page, unsigned note posted on social media accounts of dozens of Longhorns athletes noted the school’s motto of “What starts here changes the world.” It said the group was moved to issue its call for campus changes after protests erupted nationwide following the death of George Floyd while in the custody of Minneapolis police.

“The recent events across the country regarding racial injustice have brought to light the systemic racism that has always been prevalent in our country as well as the racism that has historically plagued our campus,” the statement said.

“We aim to hold the athletic department and university to a higher standard by not only asking them to keep their promise of condemning racism on our campus, but to go beyond this by taking action to make Texas more comfortable and inclusive for the black athletes and the black community that has so fervently supported this program,” the letter said.

Dozens of football players marched with coach Tom Herman last week from the campus stadium to the state Capitol in honor of Floyd.

The players said they want the school to address their concerns with campus action or a plan by the start of the fall semester on Aug. 26. It wasn’t immediately clear if the group has a leader or spokesman.

“I am always willing to have meaningful conversations regarding any concerns our student-athletes have,” athletic director Chris Del Conte said. “We will do the same in this situation and look forward to having those discussions.”

The letter said the players want the school to rename several campus buildings named after state and school officials with ties to Texas era of Jim Crow laws and segregation.

The players also want Texas, which has one of the wealthiest athletic departments in the country, to contribute 0.5% of annual revenue, slightly more than $1 million based on most recent figures, to black organizations and the Black Lives Matter movement.

The letter also called for Texas to stop using its traditional song “The Eyes of Texas,” which has been criticized for its connection to minstrel shows with characters in blackface in the early 1900s. The song is regularly sung at nearly every organized campus event and players in all sports gather as a team to sing it after every game.

“I think people are amazed that the past isn’t really so much the past,” associate professor of African and African Diaspora Studies at UT Edmund T. Gordon said Friday, according to HookEm.com. “It’s right there in front of us, but we just don’t know.”

Gordon went on to explain that Former UT President William Lambdin Prather, who served from 1899-1905, began saying ‘The eyes of Texas are upon you’ as a sign off during his speeches on campus.

The quote is a variation of civil-war era Confederate general Robert E. Lee’s saying “The eyes of the South are upon you.”

“Students, as students will do, decided to make fun of that and created a satirical song that have words that were appropriate to the University of Texas,” Gordon said. “Those are the words of the song, and they put it to the tune of a well-known song, which was ‘I’ve Been Working on the Railroad.’”

The lyrics are as follows:

All the livelong day

You cannot get away

Do not think you can escape them

At night or early in the morn

‘Til Gabriel blows his horn

The group of student-athletes also wants a portion of Royal-Memorial Stadium to be named after Julius Whittier, the first black varsity football player at Texas. Whittier, who died in 2018, was a freshman on the 1969 national championship team, the last all-white squad team to win a national title. Whittier didn’t play that season because freshmen were ineligible under NCAA rules.

Texas has previously attempted to address issues surrounding some of the Confederate figures and racist policies in its history.

All statues of white men are coming down. Every one of them.

All our traditions must be reimagined or retired, because the claim of racism is far greater than adhering to tradition or truth.

And to think, it’s all so Texas can go 7-5, 8-4 or maybe 9-3 (perhaps battle for a conference title and win the Red River Shootout… excuse me, Red River Showdown with Oklahoma) and not compete for a national title…

We lost our civilization and we lost our history because we were too afraid of being called racist and yearned to watch black athletes – who otherwise have no business being enrolled in college or the university – wear our school colors and cosplay as college students on fall Saturdays.

Because of this, we have lost our future.