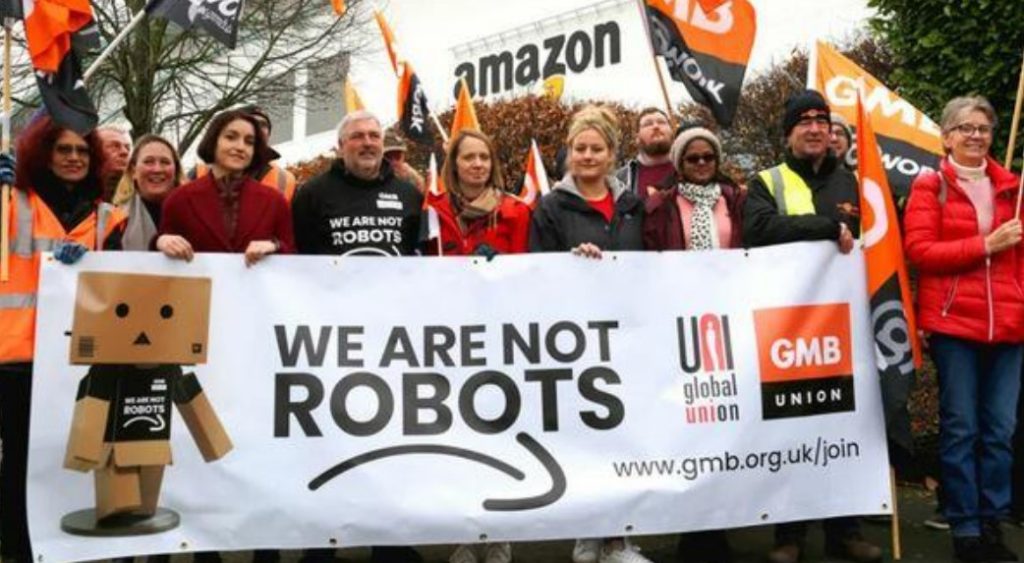 Thousands of workers across approximately 40 countries are planning to take part in ‘Black Friday’ protests to demand better wages and working conditions in the company’s warehouses, as the global cost-of-living crisis increases.

The protests will coincide with the largest holiday shopping season of the year, which means Amazon warehouse workers are going to be very busy for the next week as consumers panic buy deeply discounted items, though there might be a huge problem: less than 24 hours before the big sale begins, Bloomberg reported Amazon warehouse workers across 40 countries are about to strike.

We would note that the world’s biggest retailer has longstanding ambitions to automate its warehouses – with robots that don’t strike.

Amazon workers in the US, UK, India, Japan, Australia, South Africa, and across Europe are set to walk out of warehouses on Friday as they demand higher wages and better working conditions amid the worst inflationary environment the world has seen in decades.

The labor action is called “Make Amazon Pay” and is coordinated by an army of trade unions, with support from civil society and environmental groups.

“For workers and consumers, the price of everything is going up. And for everyone, the global temperature is rising and our planet is under stress. But instead of supporting its workers, communities and the planet, Amazon is squeezing every last drop it can,” Make Amazon Pay’s website said.

Make Amazon Pay is correct by outlining “real wages are going down”… and as we noted not too long ago, have been negative for 19 months — hence why labor unions have gained so much traction. “It’s time for the tech giant to cease their awful, unsafe practices immediately, respect the law and negotiate with the workers who want to make their jobs better,” said UNI Global Union general secretary, Christy Hoffman.

The group also outlines Amazon’s corporate greed, not paying taxes, and polluting the world. It also published a map of all the strike locations. The company replied to the protests, saying “While we are not perfect in any area, if you objectively look at what Amazon is doing on these important matters you’ll see that we do take our role and our impact very seriously,” pointing to the company’s green ambitions to reach net zero status by 2040, which is “continuing to offer competitive wages and great benefits, and inventing new ways to keep our employees safe and healthy.”

Ah, that settles it then.

Unions in France and Germany – CGT and Ver.di – are spearheading the latest collective action, with coordinated strikes in 18 major warehouses, intended to disrupt shipments across key European markets.

Monika di Silvestre, head of Ver.di’s Amazon committee in Germany, said that workers were particularly concerned about the way their productivity was closely monitored by computers, with algorithms determining targets, for example for the number of packages they need to handle per hour. -Stars & Stripes

“The workers are under a lot of pressure with these algorithms,” said di Silvestre, adding “It doesn’t differentiate between workers, whether they are old or have limited mobility. Workers stay awake at night thinking only of their productivity stats.”

Amazon warehouse employees have been speaking out against working conditions for years – notably complaining of low pay, pressure not to take sick leave when ill, and having to work so many hours they’re forced to urinate in bottles.

It’s not clear how disruptive the strikes will be for Amazon, but it’s just another reason why the world’s biggest retailer is full steam ahead in automating warehouses (read: “Amazon Unveils Warehouse Robot To Replace Human Pickers Amid Unionization Threats”).