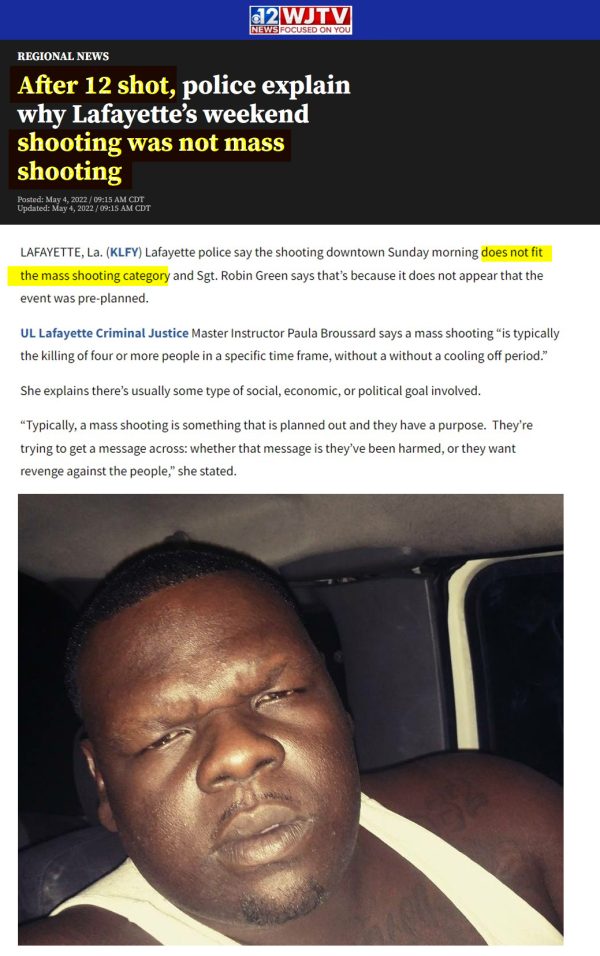 Remember, even the New York Times admitted 75 percent of mass shooters in America are black. [A Drumbeat of Multiple Shootings, but America Isn’t Listening: Most shootings with four deaths or injuries are invisible outside their communities. And most of the lives they scar are black., New York Times, May 22, 2016]

But when a black person opens fire and shoots 11 people in a city plagued with high levels of black gun crime, the police have decided this mass shooting event doesn’t quite qualify as a mass shooting. Because it wasn’t pre-planned. An individual with a low IQ and no impulse control obviously couldn’t engage in a mass shooting according to the police of Lafayette, Louisiana…[After 12 shot, police explain why Lafayette’s weekend shooting was not mass shooting, WJTV.COM, May 4, 2022]:

LAFAYETTE, La. (KLFY) Lafayette police say the shooting downtown Sunday morning does not fit the mass shooting category and Sgt. Robin Green says that’s because it does not appear that the event was pre-planned.

UL Lafayette Criminal Justice Master Instructor Paula Broussard says a mass shooting “is typically the killing of four or more people in a specific time frame, without a without a cooling off period.”

She explains there’s usually some type of social, economic, or political goal involved.

“Typically, a mass shooting is something that is planned out and they have a purpose. They’re trying to get a message across: whether that message is they’ve been harmed, or they want revenge against the people,” she stated.

“Rival gangs will often kill more than two people at a time but there is no purpose. There is no goal or message involved.”

Furthermore, Broussard says a mass shooting is a title that’s actually been created outside of law enforcement.

“It was a title that was created by the press and picked up by the media. It’s used in television and in movies, but from the police standpoint very seldom will they call a shooting, a mass shooting unless it’s a situation like in Las Vegas where somebody just started shooting up a concert or a theater.”

On Monday, the LPD released a statement regarding Sunday morning’s shooting:

“The police department wants the community to know that this was not a mass shooting. We have no evidence to indicate this, or that this was a pre-planned event.”

The identified suspect, Carl Thompson, 40 of New Iberia is listed in critical condition.

“In summary, it’s not a mass shooting because he wasn’t white.” – The Lafayette Police Department