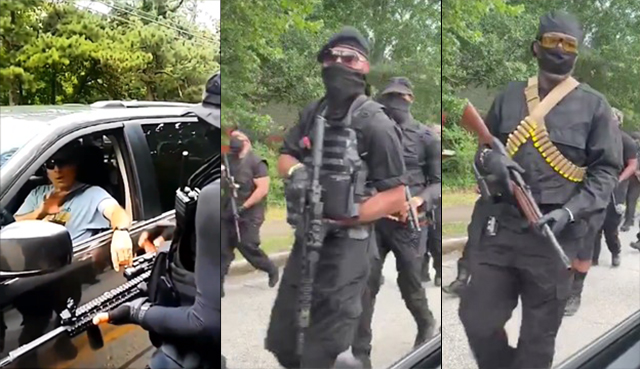 A heavily-armed self-described “Black Militia” group marched through the streets of Georgia on July 4th and held up cars to demand “reparations” from white people and the media couldn’t care less.

Approaching someone’s car armed because they’re white and demanding “reparations” is perilously close to felony armed robbery and is most definitely a hate crime.

If hundreds of armed white men marched down the street calling for an all-white ethnostate, the media would make it the leading story for years to come, declare them as terrorists, and ban them from the Internet. But when black supremacists do it, no one cares. 🤔 pic.twitter.com/nt7EOFKPN6

The militia members demanded their own ethnostate (they want all of Texas):

NFAC’s leader Grand Master Jay describing how he will build his black ethnostate inside the United States.
boasting they are all ex-military extremely disciplined & experts shooters..gonna end really bad for these guys.. pic.twitter.com/FKPCT8pRRC

Update: This group refers to itself as the NFAC “the Not Fuckin Around Coalition.” (📹@jaorialese) #BlackLivesMatter pic.twitter.com/sb2AurtbQg

Do you notice when black men decide to express their Second Amendment rights no media covered it. pic.twitter.com/qoiZmO1vDB

When white people are seen defending their own property with guns amidst widespread rioting it becomes the top story in the country but when black people do an aggressive march through the streets stopping drivers to demand race-based reparations and their own ethnostate it barely makes the news.