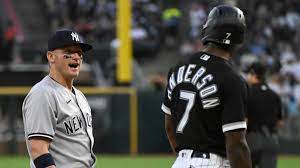 We are at a point in time where black Major League Baseball (MLB) players calling themselves “the new Jackie Robinson” (first black player in the MLB) are then teasingly called ‘Jackie’ by a white player; the black player cries and says his feelings are hurt, so the white player who called him “Jackie” – as a joke – is suspended, fined, and called a racist.

MLB has suspended Josh Donaldson one game for calling Tim Anderson “Jackie,” as in Jackie Robinson, during Saturday’s game.

“There is no dispute over what was said on the field,” said Michael Hill, MLB senior VP for on-field operations in a statement. “Regardless of Mr. Donaldson’s intent, the comment he directed toward Mr. Anderson was disrespectful and in poor judgment, particularly when viewed in the context of their prior interactions. In addition, Mr. Donaldson’s remark was a contributing factor in a bench-clearing incident between the teams, and warrants discipline.”

The comment led to a heated discussion between Yasmani Grandal and Donaldson later in the game, which in turn caused both the White Sox and Yankees benches to clear.

“It happened in the firstー the first time he got onー and I spared him that time,” Anderson said after Saturday’s game. “Then it happened again, and it was just uncalled for. We don’t need to be playing like that.”

Donaldson didn’t deny the allegations, but tried to brush it aside as a joke, per the Athletic.

Clearly, Anderson and the rest of the White Sox didn’t find the comment very funny.

“I think that’s very sad,” Dallas Keuchel said after hearing about Donaldson’s comment. “There’s no need, or room for that. Anywhere.”

“This game went through a period of time where a lot of those comments were made, and I think we’re way past that,” said Grandal. “It’s just unacceptable. I just thought it was a low blow, and I want to make sure I’ve got my team’s back. There’s no way that you’re allowed to say something like that, that like I said, is just unacceptable.”

White Sox reliever Joe Kelly was on the radio when news of the suspension came down, and he was incredulous at the one-game penalty.

“One game? I got eight games for making a silly face at Carlos Correa,” Kelly said via 670TheScore. “I got six games for someone attacking me on the mound.”

Call this whole episode another reminder of black privilege.

Josh Donaldson did nothing wrong.