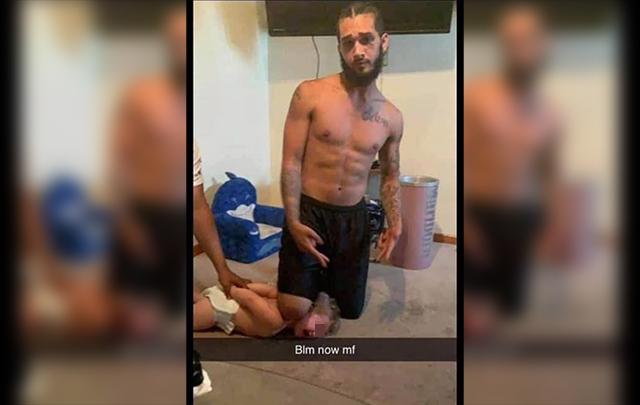 From WHIO (via The Gateway Pundit):

A picture of the post was sent into News Center 7 Tuesday, showing the man with his knee on the back of a child’s neck, who appears to be crying. A second person in the photo is holding the child’s hands behind their back. […]

Investigators in Clark County said they are investigating the post, however no arrests have been made and charges have not been filed.

According to emergency scanner traffic, deputies, police, and medics were called to two different addresses Tuesday morning in Clark County as a part of the investigation.

People are claiming on Facebook the man in the photo is Isaiah Jackson and he was arrested on Tuesday for a probation violation but that hasn’t been officially confirmed. A 20-year-old with the same name was arrested and booked on Tuesday according to Clark County Sheriff’s records. “The grandmother of the child in the photo wrote on Facebook that it was taken while the two-year-old was with his mother,” The Gateway Pundit reported. “His mother is dating Jackson.”

“The very angry grandmother said that the baby is now with her son and safe. She is currently attempting to find out who was holding the child’s legs and who took the photo.”

“‘My son is beyond pissed. He took his boy to the ER to get checked out and everything came back good,’ the grandmother wrote. ‘He better be glad nothing bad happened to my grandson and he better hide from all the people who will be coming for him when he gets out of jail.'”

UPDATE: Police on Wednesday confirmed to The Gateway Pundit they took 20-year-old Isaiah Jackson (pictured below in a 2018 mugshot) into custody on a probation violation and are “100% certain” that charges will be coming in the case. “I’m confident, 100 percent confident, that there will be charges brought against these individuals,” Maj. Christopher Clark of the Clark County Sheriff’s Office told The Gateway Pundit. “It’s just a matter of making sure that our investigation is thorough and complete so that we file a charge that will stick and be convictable in court.”

UPDATE II: The Nationalist Review reported Wednesday that a special education teacher allegedly made a Facebook post encouraging Jackson to “lean into” the small child’s neck “until death!”