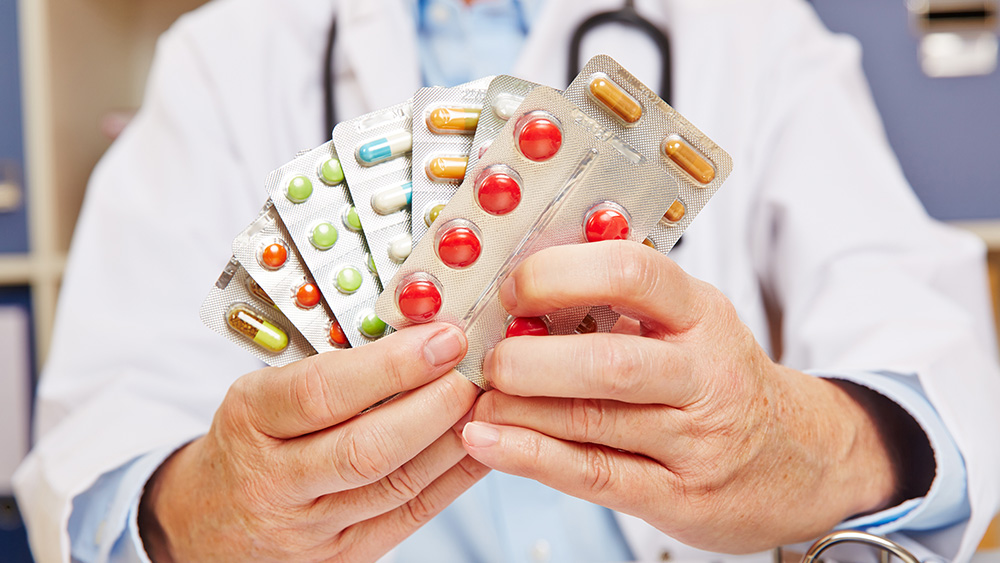 (Natural News) For years, we’ve warned that Big Pharma’s business model is a “repeat business” racket that profits from sickness and disease. We also know that cancer is a multi-billion-dollar industry that generates huge profits from the repeat business of cancer “therapies” such as chemotherapy and radiotherapy. Now comes news that a popular blood pressure drug sold by Novartis has been found to be laced with a cancer-causing chemical known as “dimethylformamide.”

“A pharmacy warned the Food and Drug Administration that it found a chemical believed to cause cancer in a widely used blood pressure medication, according to a filing from the federal agency,” reports CNBC.

The drugs are part of a popular class of prescription medications the FDA has been quietly recalling after finding them to be laced with cancer-causing chemicals. Those drugs reportedly include valsartan, losartan and irbesartan.

Even more astonishingly, this chemical contamination was discovered by Valisure, an online pharmacy that operates across America. Valisure is apparently running contamination tests on the various medications it sells, and it found that valsartan, the blood pressure medication manufactured by Novartis, contains DMF (dimethylformamide), a chemical known to cause cancer.

A pharmacy that tests the products for contaminants before retailing them… shouldn’t the FDA be doing this?

Here’s what else is fascinating: Valisure is to pharmaceuticals what the Health Ranger Store is to nutritional supplements and superfoods. Both organizations run in-house laboratories that use mass-spec analysis to ensure the clean nature of the products being sold. Valisure says about itself, “We’re the only pharmacy that chemically tests every batch of every medication we sell, at no additional cost.” This is exactly what we do for superfoods at HealthRangerStore.com, too. In fact, Valisure’s lab and our lab use the same instrumentation. In our case, we use ICP-MS for heavy metals tests and HPLC-MS-MS for glyphosate, AMPA, atrazine and pesticide tests. Valisure is using GC-MS, which is a gas chromatography version of mass spec analysis.

Both Valisure at our own in-house lab (CWC Labs) are ISO-17025 accredited laboratories. This is why when Valisure issues this announcement about a cancer-causing chemical in blood pressure medications, it gets my attention.

Valisure, the first online Analytical Pharmacy, announced it has expanded its testing capabilities to screen samples from all batches of medications it dispenses for the cancer causing contaminants N-Nitrosodimethylamine (NDMA), N-Nitrosodiethylamine (NDEA), and N,N-Dimethylformamide (DMF), the chemical solvent that has been implicated in the production of these impurities.

If you take prescription medications, you might be giving yourself cancer right now

Valisure has filed documents with the FDA, requesting the agency recall the contaminated drugs. Yet right at this moment, pharmacies all across America are dispensing these drugs to patients whose doctors have told them they have a “blood pressure problem” that requires “treatment.”

Is it any surprise that once you start taking prescription medications for one condition, you quickly develop another condition that also requires treatment? In this case, blood pressure drugs cause cancer. Many diabetes drugs cause liver disease, and cancer drugs promote more cancer tumors. Statin drugs cause metabolic disorders, hormone drugs cause cancer, and osteoporosis drugs actually cause skeletal disorders. In fact, repeat business is the entire business model of the pharma cartels: Not only do their drugs almost never solve the underlying condition they claim to “treat,” they actually cause your body to develop entirely new health problems that require additional (high-profit) prescription medications.

This is how people end up on a dozen prescription drugs while getting worse every day with metabolic disorders, heart conditions, cancer, Alzheimer’s and fatigue. The drugs are destroying their health, but that’s the business model because it brings people back to their doctors to ask for more drugs. Amazingly, we now have a drug-selling pharmacy that’s demanding a high level of safety for drug consumers. As CNBC reports:

Valisure asked that the medication be recalled and requested that the FDA review and significantly lower the acceptable intake of DMF from its current level of 8,800,000 nanograms to less than 1,000 nanograms. The online pharmacy said it found the cancer-causing chemical in valsartan produced by five companies.

To protect the lucrative prescription drug market, FDA spokesperson Jeremy Kahn said, “Patients should continue to take their blood pressure medication even if it is recalled until their doctor provides a replacement or alternative treatment… Abruptly discontinuing a medication is risky.”

But taking a cancer-causing chemical seems risky, too, and why isn’t the FDA testing drugs for contaminants anyway? For the exact same reason that the Health Ranger Store has taken on the job of the FDA when it comes to food safety testing, Valisure is doing the FDA’s job in the realm of medications. We should all find this astonishing. Why has it come down to private companies doing the job the FDA is supposed to be doing?

Dirty, filthy raw materials from India and China — this is what’s in your high-priced medications

Novartis doesn’t even deny the fact that the chemical is present in its products, by the way. Via CNBC:

In a statement to CNBC, a spokesperson for Novartis said in general the company’s manufacturing process does not use DMF but it cannot currently fully “exclude the possibility that traces of DMF (within applicable limits) may have been present in materials of other Drug Substances suppliers.”

With a few rare exceptions, China’s quality control systems are practically non-existent. This is a country where infant formula suppliers substituted melamine powder for milk powder, effectively murdering thousands of innocent babies by destroying their kidneys. China executed the CEO of that company, but only because the fiasco was too loud and made international headlines. Behind the curtain, thousands of small chemical suppliers provide synthetic molecules to the pharmaceutical industry, and quality control is so horrible on anything coming out of China that the entire country has a reputation among pharmaceutical and food manufacturers as producing the most contaminated, polluted bulk materials in the world. In fact, even organic certifiers don’t trust China, and many believe that “organic” from China is a total fraud.

Contaminants are widespread in bulk materials from China and India alike, which is why we have found very few raw materials from China that can be considered safe or clean. What makes the situation even worse is that pharma companies only check the bulk material for the target molecule they think they purchased, typically using GC-MS or LC-MS. If your target molecule has a mass of, say, 186, then you run the sample and look for 186. If it’s present, the material usually passes. The problem with this approach is that the bulk material may be contaminated with unknown chemicals, and if you don’t know in advance to scan for those chemicals in your mass spec system, you will have no idea they are present.

Mass spec instruments have to be set up in advance to detect each specific chemical, and this requires running the instruments against chemical standards while optimizing ion fragmentation, ionization, flow rates and other factors. As an apt example, on my newest LC-MS-MS instrument, I’m currently scanning food samples for both glyphosate and AMPA (a breakdown molecule of glyphosate). In order to detect these two chemicals, I have to set the instrument to scan for two parent masses (168 for glyphosate and 110 for AMPA) in negative mode, plus two ion fragment transitions / daughter ions for each. The glyphosate daughter ions, for example, are 63 and 80. If you don’t have all this information — and the proper chemical column for your GC or LC system — you won’t be able to see the contaminant chemical at all, especially when it’s only present in concentrations of nanograms per ml (the same as parts per billion).

Thus, pharma companies are running bulk materials all day long without seeing the chemical contaminants because they aren’t looking for them. (A “don’t ask / don’t tell” approach to “medical science.”) It’s only in the rare instances when an independent company like Valisure makes a point to look for specific chemicals that the real truth becomes known.

You might think it would be impossible for a company like Novartis to fail to conduct the necessary tests to clear their products of cancer-causing chemicals. Surely Novartis has mass spec instruments in their own quality control lab, right?

Of course they do. And it is very difficult to imagine Novartis accidentally letting this chemical slip through their screening effort. So it raises the obvious question: Do Big Pharma companies deliberately lace their prescription medications with cancer-causing chemicals in order to increase repeat business?

The very question will be derided as a conspiracy theory, but what if it’s just their business model? Big Tobacco used addiction to hook people on their products in order to generate repeat business. Ironically, the tobacco companies also purchased full-page ads in the Journal of the American Medical Association, touting how “Doctors recommend Camels more than any other cigarette.” Is it really much of a stretch to think that pharmaceutical corporations might do almost anything to boost their profits at the expensive of their own customers’ long-term health?

Remember: Healthy people don’t use pharmaceuticals. Repeat business in the pharma industry depends on keeping people sick. Can you think of a better way to accomplish that than lacing your product with chemicals that promote sickness? What is drug companies have been lacing their products with disease-promoting contaminants for years?

Truth be told, even though I don’t take any medications at all, if I did, I would buy through Valisure.com just because I know they’re testing for contaminants. This is the first pharmacy I actually applaud for their efforts to use good science to confirm clean products. (A “clean” pharmaceutical doesn’t necessary mean it’s 100% safe, of course, since the drug itself can be quite toxic depending on what it is.)

If you’d rather avoid being sick and pursue health and longevity instead, get your superfoods, food-based supplements, essential oils, organic storable foods and ultra-clean home living products through HealthRangerStore.com, where we test everything we sell at no additional cost to you. In fact, we use the same instruments as pharmacies and pharma companies. We just use them for a higher purpose.

Sources for this story include: