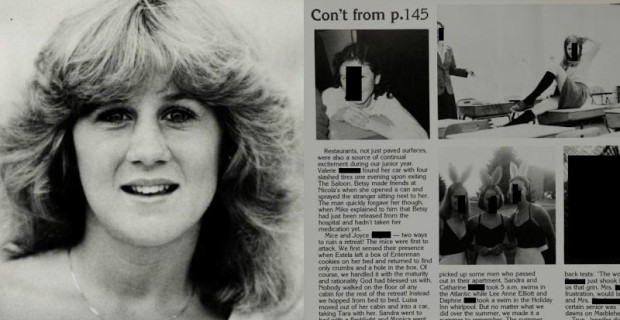 Christine Blasey Ford’s high school yearbooks, which are filled with references to drunken promiscuous parties where the attendees were not able to remember what happened, have been scrubbed from the Internet.

The Cult of the First Amendment blog was able to save copies of the yearbooks before they disappeared.

Christine Blasey Ford claims that Judge Brett Kavanaugh “physically and sexually assaulted” her during a party in the early 80’s when she was 15 and Kavanaugh was 17, although two other people Ford claims were present when the assault happened have denied that it ever happened.

Ford’s yearbooks, which cover her sophomore, junior and senior years, the exact time frame when she claims the assault happened, portray a debauched environment of constant binge drinking and partying.

“Lastly one cannot fail to mention the climax of the junior social scene, the party,” reads one passage. “Striving to extend our educational experience beyond the confines of the classroom, we played such intellectually stimulating games as Quarters, Mexican Dice and everyone’s favorite, Pass-Out, which usually resulted from the aforementioned two.”

Another passage emphasizes how “loss of consciousness” at such parties meant that attendees only retained hazy memories of them.

“And there were always parties to celebrate any occasion,” reads one passage. “Although these parties are no doubt unforgettable, they are only a memory lapse for most, since loss of consciousness is often an integral part of the party scene.”

Several passages discuss drunken keg parties while parents were away.

Another entry describes the rampant promiscuity that took place during Ford’s time at Holton-Arms, including one description of how, “Ann [redacted last name] and friends picked up some men who passed out in their apartment…”

The fact that Ford’s high school years were replete with drunken parties which attendees could barely remember is an important detail given her apparent difficulty to remember specifics about the time when Kavanaugh allegedly assaulted her.

The yearbooks appear to have been mysteriously scrubbed from the web on Monday September 17.

With Republicans demanding Ford testify before Monday or a vote on Kavanaugh move forward, the credibility of her story is rapidly falling apart.