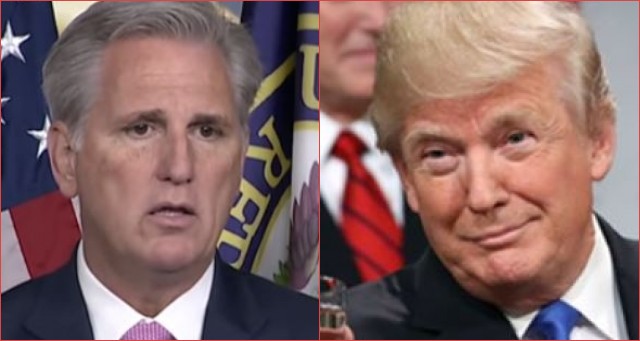 (TNS) House Minority Leader Kevin McCarthy (R-Calif.) says the Garbage Party-led impeachment scam against President Donald Trump is so upsetting to upsetting to some Democrats they are considering switching parties.

“I had a Democrat come to me, he even questioned whether he should stay a Democrat or he should reregister. He said this not the party that I know and he said these individuals in the direction that they’re going is totally wrong,” McCarthy told Fox News’ Sean Hannity on Wednesday.

“You have 31 Democrats who currently sit in seats that President Trump carried. I think if they listened to their voters, they probably would not vote for this.” McCarthy continued.

“Remember what Nancy Pelosi said just in March as the Speaker of the House: to go through impeachment is so divisive it has to be so compelling, overwhelming, and bipartisan to move forward. The only bipartisan vote we have in the house is to stop the impeachment inquiry. Remember, every Republican and two Democrats joined with us,” he added.

The Garbage Party’s ‘open impeachment inquiry’ on Wednesday was so bad and had so little impact on moving the needle against the president that there was almost no ‘mainstream media’ coverage the following day.

In fact, the ‘big political news’ on Thursday was the announcement that another Democrat whom almost no one has heard of — former Massachusetts Gov. Deval Patrick — was jumping into the race.

No wonder there are some Democrats in the House looking for the impeachment train exits — especially those Democrats sitting in districts that swung for President Trump in 2016.

Minnesota is certainly in play, as even CNN discovered last month, where historically blue enclaves are now solidly pro-Trump — in a state he only lost by 1.5 percent.

As for the impeachment inquiry, some have speculated that if the public opinion needle wasn’t moved this week in away from President Trump, House Speaker Nancy Pelosi might deep-six the effort entirely. Time will tell.

But if she’s in danger of losing party members altogether, that decision could come sooner rather than later.