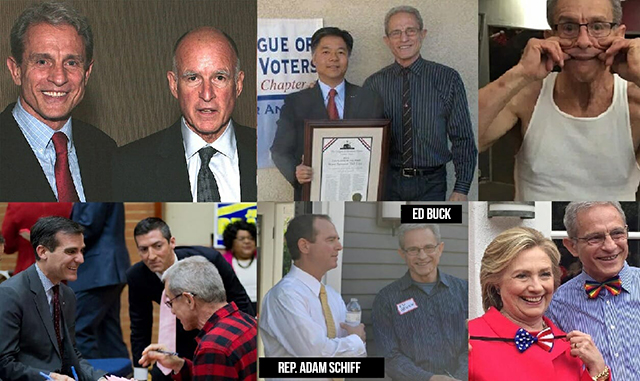 How many homosexual black male prostitutes need to show up dead at Democrat megadonor Ed Buck’s home before he’s held to account?

While Republicans are endlessly harangued for “racist microaggressions” and coded “dog whistles,” top Democrat donors can allegedly drug homosexual black prostitutes to death without any issue.

A man died early Monday at the West Hollywood home of prominent Democratic donor Ed Buck, his attorney confirmed to Fox News — 17 months after a male escort died in the same apartment.

Attorney Seymour Amster told Fox News the unidentified victim was a “longtime friend” of Buck and said the two had known each other for 25 years. Amster said the victim “reached out for [Buck’s] help” Sunday night and began acting “in a bizarre way” after he arrived at Buck’s apartment.

“As far as we’re concerned, this is an accidental death,” said Amster, who added that police had released the scene and Buck was not under arrest.

Buck, a well-known figure in LGBT political circles, has given more than $500,000 to a range of Democratic groups and candidates — including former President Barack Obama, former Secretary of State Hillary Clinton and Los Angeles Mayor Eric Garcetti. In July of last year, prosecutors declined to file charges against Buck in the death of Gemmel Moore, a male escort whose body was found in Buck’s apartment in July 2017. According to a coroner’s report, Buck’s apartment was full of drug paraphernalia, including 24 syringes containing brown residue, five glass pipes with white residue and burn marks, a plastic straw with possible white residue, clear plastic bags with white powdery residue and a clear plastic bag containing a piece of crystal-like substance.

Moore’s death initially was ruled an accidental methamphetamine overdose, but the Los Angeles County Sheriff’s Office re-opened the investigation after writings in Moore’s journal implicated Buck in his drug use. In a December 2016 entry, Moore wrote: “I’ve become addicted to drugs and the worst one at that. Ed Buck is the one to thank. He gave me my first injection of crystal meth it was very painful, but after all the troubles, I became addicted…”

Just a coincidence, no doubt.

Buck, a white man in his 60s, was investigated previously by authorities after the death of Gemmel Moore, who died of a methamphetamine overdose in Buck’s home in July 2017. Since Moore’s death was classified as an accidental overdose, numerous young black gay men have alleged that Buck has a fetish for shooting drugs into black men he picks up off the street or on hookup sites. Moore had written about Buck injecting him with dangerous drugs before his death.

Buck is a fixture of the Democratic Party in California:

Protesters gathering to call for the prosecution of prominent Democratic donor Ed Buck after two men separately die inside of his #WestHollywood apartment in less than two two years. One was a meth overdose. Protesters meeting in front of his building on Laurel Ave. @FOXLA pic.twitter.com/B0r4BCFtFP

For the second time in under two years, someone has died inside Democratic donor Ed Buck’s West Hollywood apartment. Latest body found early this AM. In 2017, man died of meth overdose. These exclusive surveillance vid stills are from then. @LASDHQ investigating again. @FOXLA pic.twitter.com/aDTqUPJQO7

His lawyer’s defense is something to behold:

The lawyer of political donor Ed Buck, explaining why the body of another dead Black man was found in his house for the second time in 18 months, and why Ed Buck has not been prosecuted. What are the odd someone dying in your house…TWICE? pic.twitter.com/wQGnEfl3sg

This was all predicted last year:

Wow. Looking back at this tweet and the unfortunate news today of this exact thing happening 😥. https://t.co/AnR6KIlAjJ

CNN has so far managed to ignore the story entirely: Imagine for a moment the reaction if a homosexual black male prostitute showed up dead at the home of Republican megadonor Robert Mercer.

Now imagine authorities saying he did nothing wrong.

Now imagine another homosexual black male prostitute showed up dead at his home for a second time a year or so later.

That would be the top story in the country and everyone in America and half the Western world would know Mercer’s name and the name of his victim.

Instead, because it’s a Democrat megadonor, CNN doesn’t even cover the story and the fake news media just brushes over it like they’re reporting the day’s weather.