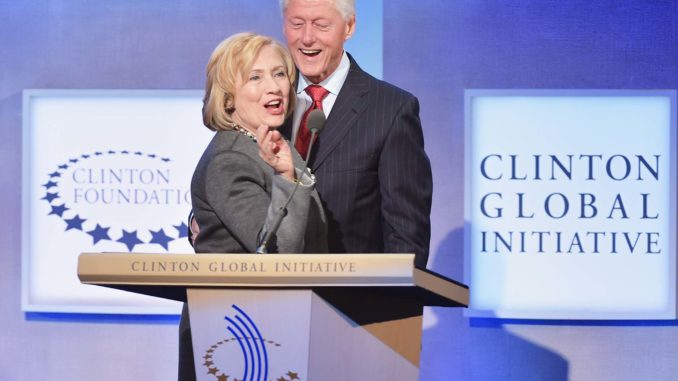 In a 15 year accounting of foreign donors, England donated 8.4 million and Saudi Arabia 7.3 million to The Clinton Foundation.

Ukraine beat both of those countries.

Yes I did say UKRAINE.

DC Whispers lays it out for us…

Ukraine became a vast pool of U.S. taxpayer-funded “aid” that poured into that long-corrupt nation and then saw piles of kickbacks returned to powerful and politically-connected recipients.

The far-left media is still trying to ignore how many times Joe Biden grabbed some of that Ukraine stash for his family but chances are it wasn’t anywhere near what the Clintons did – and all with the blessing of President Obama.

And check out this excerpt from a 2015 report:

Between 2009 and 2013, including when Mrs. Clinton was secretary of state, the Clinton Foundation received at least $8.6 million from the Victor Pinchuk Foundation, according to that foundation, which is based in Kiev, Ukraine. It was created by Mr. Pinchuk, whose fortune stems from a pipe-making company. He served two terms as an elected member of the Ukrainian Parliament and is a proponent of closer ties between Ukraine and the European Union.

Read the rest at DC Whispers…

Well, we should add this to the list of recent Ukraine bombshells.

Brennan, Pelosi and Schiff, oh my!

The lion, tiger and bear were following Obama’s direction as was the resident moron — Joe Biden.

This Ukraine controversy could undo the entire Democrat party.

Let’s not forget, that it was NEO-NAZIS that were put into power in Ukraine, after Obama and company did their meddling.

Unfortunately we all know that Dead Men Tell No Tales.

But there is plenty of evidence that would, at the very least, merit an investigation if anyone is willing to look at it.

When Trump’s impeachment blows up, and it will, there will be a lot of Democrats trying to blame this whole mess on John McCain, mark my words.