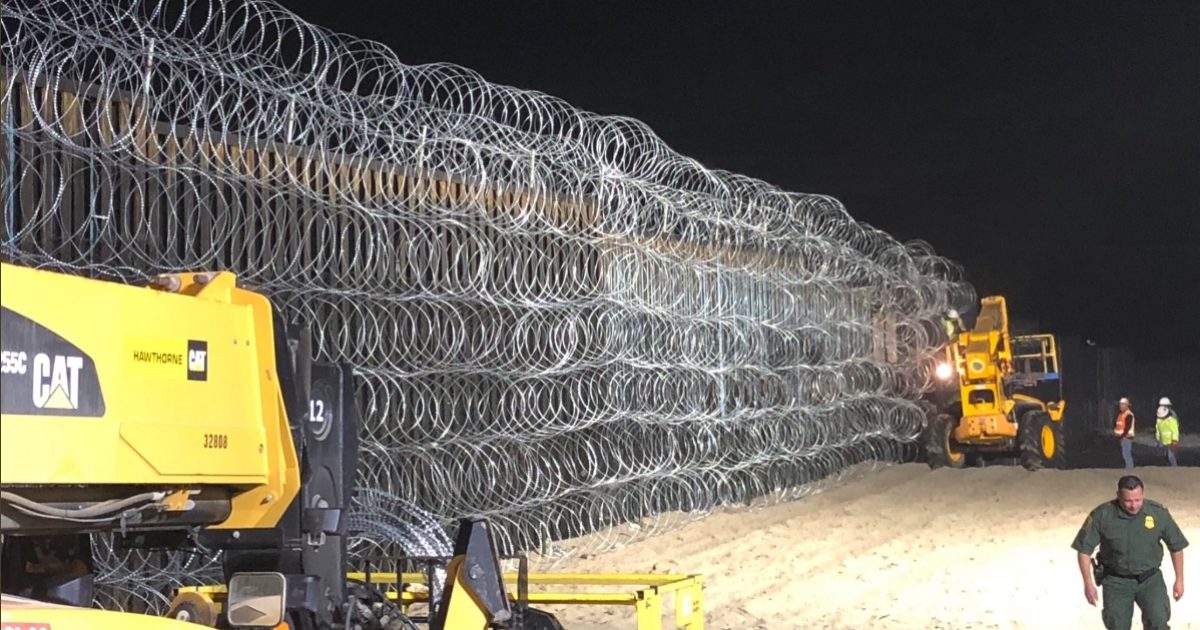 On Thursday evening, the Republican-led House passed another spending bill that included $5.7 billion for the border wall that President Donald Trump has been promising Americans. The move proves that both House Majority Leader Nancy Pelosi (D-CA) and Senate Majority Leader Chuck Schumer (D-NY) were both lying through their teeth when they sat in the Oval Office last week and declared to the nation that Trump did not have the votes in the House to pass a spending bill with $5 billion for border wall funding.

Just to recap that conversation so that you hear it from their own mouths, here’s the video.

Pelosi pontificated, “The fact is is that legislating, which is what we do, you begin, you make your point, you state your case. That’s what the House of Republicans could do, if they had the votes.”

“But there are no votes in the House, majority votes for a wall,” she added. “No matter where you start.”

And Senator Schumer echoed her comments, “That’s exactly right, you don’t have the votes.”

Well, not that any of us are surprised by the fact that Schumer and Pelosi are liars, but this just demonstrates to what extent they will lie to the American people. Additionally, I have to say, I’m surprised that the House Republicans actually put that in there. I mean, I’m really surprised, but again, perhaps some are at a point of just wanting to go home for Christmas and Trump played on that. I don’t know.

The House of Representatives Thursday approved a bill that would fund most of the federal government through early February — and provides $5.7 billion for President Trump’s long-promised border wall, increasing the chances of a partial government shutdown later this week.

Eight Republicans joined all 177 voting Democrats to oppose the measure, which passed 217-185. The bill now goes to the Senate, where it is certain to fall short of the 60 votes needed for passage since the chamber’s 49 Democrats are against funding the wall. That, in turn, makes it more likely that parts of the federal government, including nine of 15 Cabinet-level departments and dozens of agencies, will cease operations at midnight Friday.

The vote came hours after Trump told House GOP leaders that he would not enact a Senate-passed package that does not provide money for the barrier.

Without seeing the other spending in the bill, which always concerns me because DC politicians are always prone to unconstitutional spending, I can’t speak to what they have included besides the wall funding, and that should be addressed, but this is a significant development.

As I reported earlier this morning, Trump is still concerned, as he was last week, about the Senate. He took to Twitter to rub Pelosi’s face in the vote first.

“Soon to be Speaker Nancy Pelosi said, last week live from the Oval Office, that the Republicans didn’t have the votes for Border Security. Today the House Republicans voted and won, 217-185. Nancy does not have to apologize. All I want is GREAT BORDER SECURITY!” he tweeted on Thursday evening.

Trump praised House Republicans for getting the funding in the bill and getting it passed.

“No matter what happens today in the Senate, Republican House Members should be very proud of themselves. They flew back to Washington from all parts of the World in order to vote for Border Security and the Wall. Not one Democrat voted yes, and we won big. I am very proud of you!” Trump added.

He then exhorted Majority Leader Mitch McConnell to fight on the issue and exercise the nuclear option.

“Senator Mitch McConnell should fight for the Wall and Border Security as hard as he fought for anything. He will need Democrat votes, but as shown in the House, good things happen. If enough Dems don’t vote, it will be a Democrat Shutdown! House Republicans were great yesterday!” Trump tweeted.

He then exhorted McConnell: “Mitch, use the Nuclear Option and get it done! Our Country is counting on you!”

Trump has warned that if Democrats do not come to an agreement and pass the border wall funding in the bill that there will be a “very long” government shutdown.