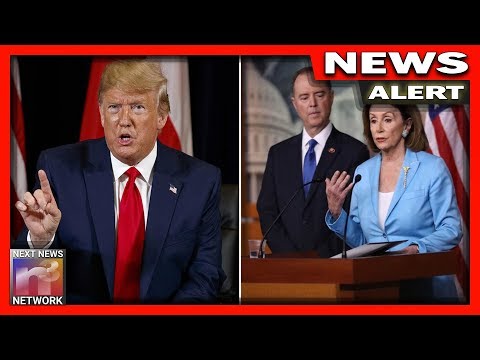 President Trump wants to mount a public defense, rather than force a quick vote to dismiss the charges against him, if The House votes to impeach.

…he wants ADAM SCHIFF called as a witness.

President Trump does not seem to want this impeachment nonsense to blow over.

He’s looking to expose the truth and embarrass the Democrats.

Is this what Trump calls 3D Chess?

It appears he has been setting Democrats up for the fall.

If he gets his way this could end the Democrats for good, or at least leave their leadership in total chaos.

During their discussion President Trump touched on nutjob Adam Schiff, incompetent Pelosi and the insane impeachment fiasco they held in the US House the past two weeks over nothing.

On FOX and Friends President Trump had this to say, “There’s nothing here… Number one there should never be an impeachment. Nancy Pelosi is totally incompetent. They just got obliterated. Adam Schiff is a nutjob.”

GOP leaders and the White House plan to put on a full trial in the Senate if the House Democrats impeach. President Trump wants to mount a public defense, rather than force a quick vote to dismiss the charges.

Donald Trump says he wants an impeachment trial in the Senate, despite saying that "they should never, ever impeach." pic.twitter.com/ZAENby2hcA

Again, has it been Trump who has been setting the Democrats up all along?

Schiff and Pelosi are not who they might seem to be.

They had a lot more to gain than an impeachment here.

They were fighting to deflect their own guilt.

Of course there were other Dems who were involved in dirty dealings with Ukraine, involving millions of $$$.

Anyone that has been following this charade probably understands that BIG NAME Dems like The Clintons, Obama, Kerry and The Bidens are probably scared to death of their dealings being exposed.

Is Trump going to eliminate all the top brass Democrats with an extension of this Show Trial?

Trump is a smart man.

Maybe this has been the plan all along.

Maybe he wanted to be impeached so he could gather all of the guilty in one place and shine a light on them all.

Pelosi and Schiff are not the only ones who should be afraid.